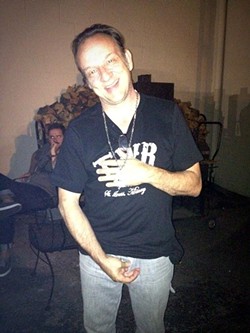 The Jesus Lizard singer is also an actor and he spends a decent amount of time in St. Louis for his various projects. During his time here, he even served as the guest bartender one legendary night at the Waiting Room in St. Ann, where he was very cool about spending quality time with the many fans who showed up to get served a drink by a legend.

Yow’s performance on this tour isn’t expected to be as wild as his time on stage in bands, though. This intriguing appearance is designed to showcase his other talents. Josh Timbrook of the Heavy Anchor describes Yow’s upcoming performance as “part stand-up, part telling stories with video.”

JD Pinkus of the Butthole Surfers is also on the tour and is expected to perform a solo set on the banjo.

The show is billed as “A Night to Forget: An Evening of Films, Comedy & Music” and also includes Peter Bolte, Van Buren and Zak M on the lineup.

This full night of entertainment starts at 8 p.m. and is expected to sell out. Tickets are $18.00 and are available now at theheavyanchor.com/online-tickets, but proof of vaccination and a mask are both required to enter.