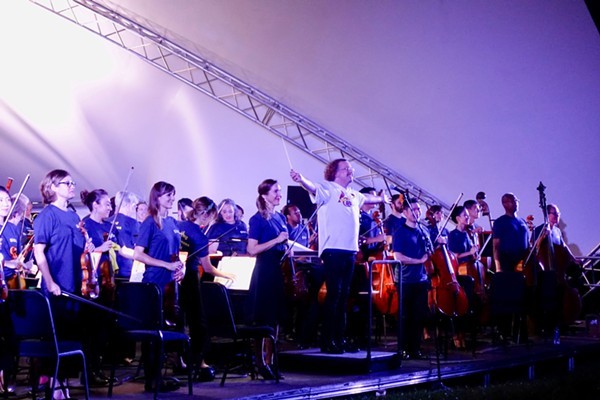 Archeological treasures belong in a museum, but, in April 2020, the St. Louis Symphony Orchestra canceled its season of live-scored classic movies — including Raiders of the Lost Ark — because people belonged anywhere but a crowded concert hall while the pandemic was rolling through society like a boulder through a Peruvian temple.

More than a year later, the symphony is whipping back into its traditional live performances, including the classic Indiana Jones flick.

Originally scheduled for May 2020, Raiders of the Lost Ark will finally get its orchestra-backed screening in two performances on February 18 and 19, with SLSO's musicians providing John Williams' iconic score to the classic adventure.

Similarly canceled in the first wave of the pandemic, SLSO's musicians will conjure their magic to live-score Harry Potter and the Deathly Hallows Part 1 for three performances January 21-23.

The upcoming symphony season features even more chances to let your cinema spirits soar, with the orchestra performing along to Disney/Pixar's Up on January 2 and Star Wars: Return of the Jedi on May 12-15.

If cinematic scores aren't your bag, SLSO's symphonic tribute to the Beatles — also previously canceled in 2020 — still has standing room and limited view seats available for its October 22 show. A "symphonic experience," the show is described as featuring accompaniment by "incredible vocalists and hundreds of rare and unseen photos" of the legendary band.

St. Louis Symphony Orchestra is located at 718 North Grand. Tickets range from around $35 and up. For specific show information, check out the full season schedule on the SLSO website. Attendees must bring proof of vaccination or a negative COVID test.