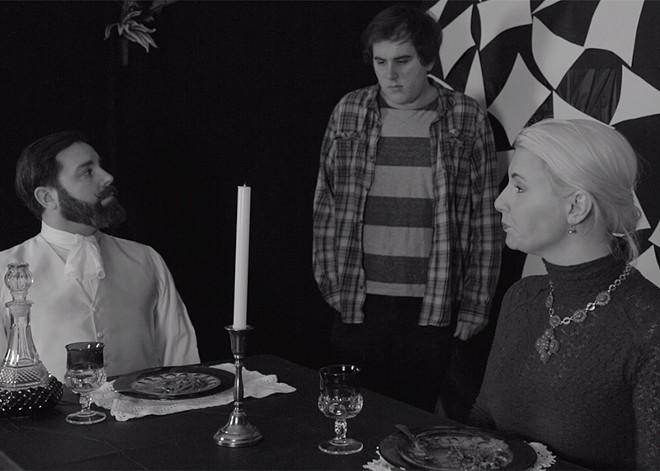 There came a moment early in the writing of Part Time, when the script was still growing beyond its first dozen pages, when Stryker Spurlock decided that the plot should be more than an extended gag about spontaneous teleportation.

Spurlock, one of the key creators behind the live comedy sketch series Fatal Bus Accident, has created something deeply strange in his first feature film. Part Time premiered at the Arkadin Cinema earlier this summer, and has its next screening set for October 9 as part of the Webster Film Series.

Shot mostly in Maryland Heights over a period of five years, Part Time is not your traditional slacker comedy. Its lack of mirth is all the more pointed as its cast is almost entirely stocked with familiar faces from St. Louis' standup comedy scene. Instead, the film's humor is the abyssally dark variety, a journey into the worming, unmoored existence of its young protagonist, "Casey" (Casey Paulsen), an aimless book shop employee whose supernatural tendencies might actually be the most manageable problems in his life.

In an interview, Spurlock says he had started writing the film in August of 2016, shortly after meeting Paulsen at a local comedy show.

It's the sort of absurd, self-negating premise that would feel right at home in a script for Fatal Bus Accident, which concluded its fifteen-show run in 2019. By then, however, Spurlock says he was "fed-up doing comedy, and and I wanted to play with something else."

That sense of creative restlessness comes through in Part Time, where that "something else" is largely delivered through Paulsen's performance as "Casey," a role which Spurlock says came to life during the shooting.

In short, "Casey" is not okay. Long scenes show him trudging through Maryland Heights and suburban north county, or going through the motions of his workday where his detachment is all the more apparent among his wisecracking coworkers. He is a gray rock, absorbing the concern and attempts at support from his family and friends, and returning only a dull glow of some unspeakable suppression waiting to explode.

And then there's how "Casey" eats — with violence, he chugs energy drinks, devours candy bars and demolishes a tub of ice cream. Although Spurlock credits Paulsen for infusing these otherwise mundane scenes with the energy of a drowning man, it is Spurlock's camera that forces the audience to to watch him eat the whole thing, bite by bite, over the course of a minutes-long unbroken shot.

But Part Time isn't entirely attached to the main character's postmodern turmoil or interrogating what part-time work means for someone who is going to pieces before your eyes.

Without giving too much away, "Casey" starts teleporting, and here Part Time becomes something almost approximating comedy. These scenes absolutely fly off the rails with the performances of "The Lord" (Christian Lawrence) and "The Lady" (Meredith Hopping). Their tantrums, demands, and childlike domineering make Part Time a riveting and unexpected experience — you never know when "Casey" will turn around and find himself in a Victorian mansion facing two scenery-chewing socialites who never seem to be satisfied.

What does it all mean? Spurlock leaves the film intentionally muddied, though several narrative threads offer compelling glimpses into what "Casey" is going through, and where the film's climax leaves him.

That's more than Spurlock first intended. During the early stages of writing the script, he says he wanted the film "to be a complete brick wall where there's there's no way of understanding what happened."

Instead, it seems he strategically knocked a few bricks loose, leaving just enough room for the audience to peek through.

"I didn't go into this thinking about the audience, I only kind of wanted to make something that I thought would be sick to look at. And I accomplished that mission," he says. "But I think there are two things I enjoy the most: when people are really delighted by it, and it really resonates with them, they can kind of see themselves in Casey.

"And then," he continues, "I also enjoyed when some people were kind of unsettled by it. Like, if they left the movie kind of uncomfortable about their own life, I think that would be really cool."