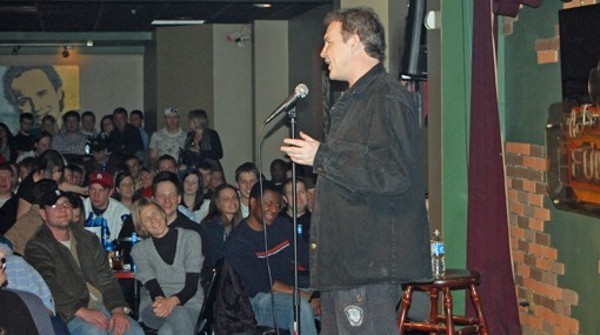 St. Louis' premier comedy club is expanding out west, and it's bringing the laughs with it.

The Funny Bone (614 Westport Plaza Drive, Maryland Heights; 314-469-6692) has been bringing comedy to St. Louisans since 1985, and now it will be bringing them across the river in St. Charles, to a second location expected to open this fall.

The move will make the second club a part of the Streets of St. Charles development project, built at the spot where Noah's Ark once stood (1520 South Fifth Street, Saint Charles). That project, headed up by Cullinan Properties, Ltd. consists of a 27-acre community featuring multi-family housing, office space, dining, hospitality, retail and, importantly for this discussion, entertainment.

“We are excited to expand the entertainment options at Streets of St. Charles with Funny Bone Comedy Club, which greatly complements the wide array of shopping and dining options,” Cullinan Properties Senior Leasing Representative Patricia Kueneke says in a statement. “Patrons will now be able to do some shopping, grab dinner and catch a show, all in one convenient, exciting location.”

The Funny Bone's St. Charles location will be on Beale Street, between Arch Apparel and Prasino. Owner Jerry Kubach says it's the "fun atmosphere and evening activity" in the district that initially persuaded him to open a new location there. He expects that the club will be a perfect fit, and will be welcomed by the people of St. Charles. “We will strive to bring the best up and coming talent along with familiar high-profile comics that the crowds love," he says. "Stay tuned for the list of comics that will be performing in the fall.”

The Funny Bone is just one of several new additions to the district, which also announced that plant-based soap makery Buff City Soap has just opened its doors as well, joining several other well-regarded shops and restaurants that recently opened including Paperdolls Boutique, Sauce on the Side, Loaded Elevated Nachos and Napoli III.

For Kueneke, the new slate of openings represents a return to normalcy after an extremely difficult twelve months.

“After a tough year nationwide, it’s clear that Streets of St. Charles is thriving more than ever and remains the premier mixed-use destination for the Metro St. Louis area,” she says.

The Funny Bone's St. Charles location is slated to open in the fall. Operations at its current location will continue as usual. For more information, visit stlouisfunnybone.com.