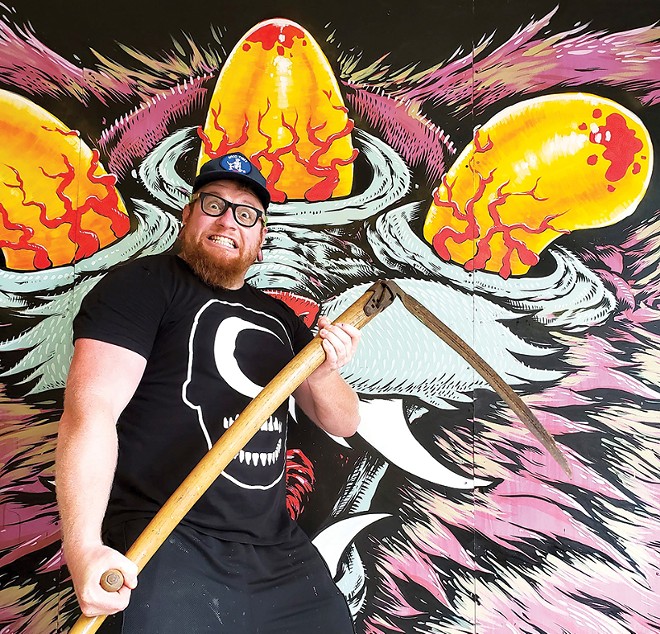 Jason Spencer has largely spent his months of pandemic life in his home, surrounded by monsters.

A scaly warthog creature with three eyeballs, nine pupils, sharp fangs and a nose ring. A demented clown-demon with a knife through its head and a scowl on its face. And, of course, various fish-beasts with huge breasts, waving crosses with their alternatingly super-buff and pathetically scrawny human arms.

It sounds scary, sure. But for Spencer, it’s just another day at the office.

Spencer is best known in St. Louis for the many jaw-dropping murals he’s painted on walls throughout the city. You’ve surely seen his work — his skeleton surfing on a slice of pizza while firing lightning out of a guitar on the side of Pizza Head on South Grand; his wraparound mural depicting sandwiches and cans of beer as spaceships rocketing through the galaxy on the Gramophone’s patio; the murder of deranged crows that recently appeared on the back of the patio at the still-closed Crow’s Nest in Maplewood.

“And that was a wild one too, because I finished that right before the week that everyone closed down,” Spencer says of the latter. “So I was talking to Kenny [Snarzyk, Crow’s Nest owner] — no one knew at the beginning — saying, ‘Yeah, maybe we’ll just hold off and hang it up whenever you guys open back up.’ But nobody knew how long shutdown would actually last. Eventually, we got it hung up over the summertime because they were making more plans for the Crow’s Nest, which is cool.”

Ever since the COVID-19 crisis took a sledgehammer to the pocketbooks of the breweries and businesses that funded those mural projects, Spencer has mostly been creating his insane work within the confines of his own home. Under his Killer Napkins brand, he’s been peddling various wares depicting monstrous creeps through his online store, shopkillernapkins.com.

“I opened the online store, this newer online store, at the beginning of the year,” Spencer says. “And I think that was even before pandemic times. But then that gave me even more incentive, when everything was kind of feeling like it was moving to the digital world, to really kind of bump and learn more about online sales and marketing and stuff.”

Spencer’s efforts in those regards, and his unique artistic talents, have ensured that he stays occupied — and, importantly, financially stable — throughout the pandemic. Though the bulk of his income these days comes through commissions for logos and art from brands and bands (Spencer has a longtime working partnership with local act the Maness Brothers, but he’s also worked with many other local and national acts including Panic! At The Disco), he’s found a somewhat unlikely revenue stream during this time as well: blankets. 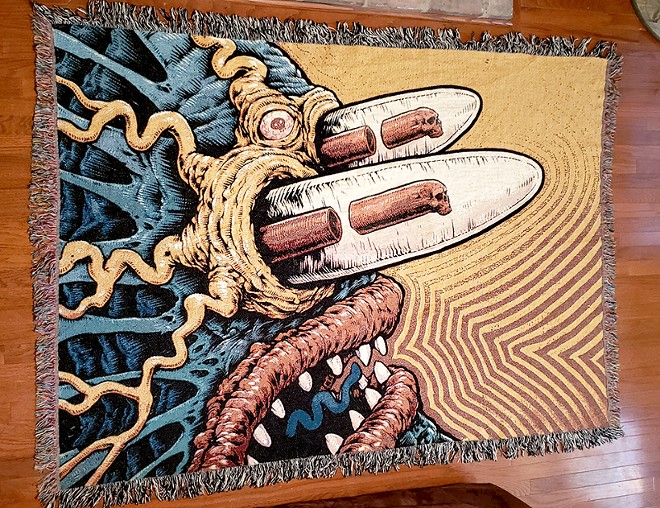 “I feel like I first started seeing some woven blankets pop up on my sponsored ads from some other company,” Spencer says. “I was curious to see what the process is with that, because they look really cool. Basically, it’s a print-on-demand, drop-shipping sort of situation where you can submit your artwork to them and then they’ll produce you a blanket. Now, you always get varying results of what that means, because you’re limited to a color thread count with that process. But yeah, I just thought it was a cool way to make a unique product with some of my art instead of just a T-shirt or paper print or something.”

Spencer started selling his first tapestries, depicting five monster heads of varying states of absurdity, in January. The reaction from the blanket-buying public was so overwhelming and immediate that he has since added ten more designs in his signature batshit-crazy style, including one in which a fish with arms chugs oil over a banner that says “Skip Class, Huff Gas,” a depiction of a weeping Virgin Mary with alien features and, naturally, a few more covered in monsters.

His efforts to step further into the digital world have helped with the marketing side of things. A former construction worker, Spencer recently built an elaborate setup that allows him to stream in-process videos on social media while drawing his demented works.

“I’ve always wanted an easy way to document the process of artwork. Just having a stable camera system going on, documenting the process of it and documenting the final products,” Spencer explains. “And so at the beginning of the pandemic I got this badass drafting table for like $180 on Craigslist — it’s humongous too, takes up most of the room — but after a while I was like, ‘Man, I need to build a little rig that goes over the top.’ I invested in a nicer camera that could then tether to my computer so I can remote control the camera and take pictures, take video. Or I can also, I set it up to where I can just start streaming and having some top-down, high-quality camera streams of art creation.

“For the most part, I’ve been pretty much hunkering down in the house and trying to make the home art studio a lot cooler,” he adds. “Which so far has been kinda successful.”
A recent in-process video uploaded to social media by Spencer.

To say that Spencer has been keeping busy is an understatement; his drive to create makes those of us who have spent most of the pandemic baking sourdough bread or watching trash documentaries about tigers and the mutants who cage them look like a bunch of slouches. And to top it all off, he’s recently started experimenting with other disciplines as well — namely, sculpture art — though he preposterously characterizes that work as though he’s dropped the ball. 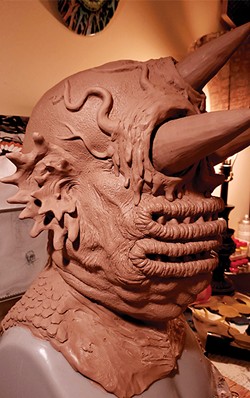 “I’ve been kind of looking at the same sculpture for a while now,” Spencer laments. “I’ve always wanted to make a full-size latex mask, so I got a little investment into some mask-making sculpture supplies, different clay stuff. I think I’m gonna pick that back up again. I just gotta finish the sculpt a little bit and make a mold and then cast it. But I think doing smaller things in the future, like some resin casts and stuff, would be pretty cool and also could be filmed as a process thing on that table, too.”

Asked if the completed mask would be COVID-safe to wear on a trip for groceries, Spencer laughs.

“I guess you could wad up some filters inside,” Spencer says. “But you’ll be scaring the hell out of everybody.”