The Best Things to (Relatively Safely) Do in St. Louis This Week: October 22 to 28 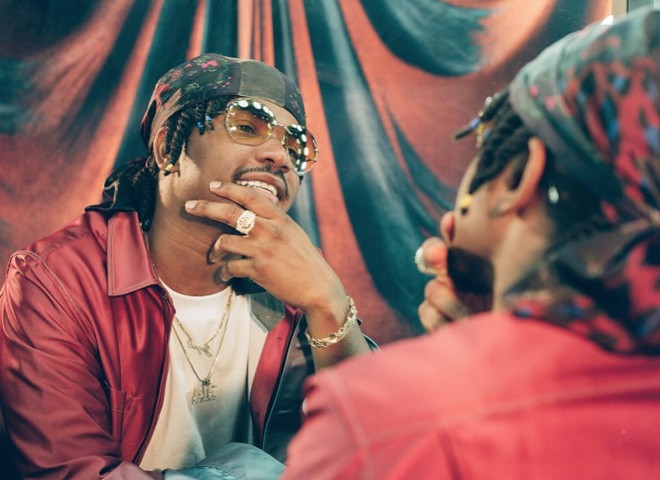 Wet Hot American Summer Live Read
9 p.m. Saturday, October 24. Live-streamed event. Suggested donation $20.20 and up. wethotamericansummer.com.
In the canon of all-time best bad movies ever made, Wet Hot American Summer stands in a class of its own. The 2001 summer-camp sex-comedy satire was near-universally panned by critics upon its release (Roger Ebert wrote his entire scathing one-star review in the style of Allan Sherman's "Hello Muddah, Hello Faddah," as sure an indication as any that the film's absurdist comedy was not crafted for his ilk), but has since attained a dedicated cult following, in part due to the sheer star power of its ensemble cast. Written by David Wain and Michael Showalter of MTV’s sketch-comedy series The State and directed by Wain, the film features performances by Paul Rudd, H. Jon Benjamin, Bradley Cooper, Amy Poehler, Christopher Meloni, Elizabeth Banks, Ken Marino, Molly Shannon, Joe Lo Truglio and many more who have since gone on to become household names in the world of comedy. This week many of those same cast members will reunite for a live read, via Zoom, with all funds going to support the Biden Victory Fund. The read will include “the beloved classic plus bonus selections from every iteration of Wet Hot American Summer,” according to its event page, as well as a Q&A and appearances by some “special guests.” And while it’s true that such events have been in vogue lately — earlier this month the cast of Veep raised more than $500,000 for the Biden campaign during a similar reunion — you can bet that this particular cast of irreverent improv alums will not be content to deliver the material exactly as written, making this a must-see for diehard fans, critics be damned.
Walla Walla Hoo! If you’ve only seen the original, now would be a great time to fire up the Netflix box and catch up on the eight-episode prequel series, First Day of Camp, and its fellow eight-episode sequel to the movie, Ten Years Later. It’s a safe bet some of those aforementioned “bonus selections” will draw from that material.

Ms. Hy-C & Fresh Start w/ Roland Johnson
12 p.m. Saturday, October 24. The Lot, The Lot, 714 Cerre Street. $13 to $16. No phone.
The recent passing of the legendary Kim Massie left a massive hole in St. Louis’ soul and blues scene, one that’s not likely to be filled anytime soon. But St. Louis is a blues town through and through — and not just the sporting-on-ice variety — so the music cannot and will not stop. Luckily the blues is a music born of struggle and strife, of pain and loss, and its healing powers are just what the doctor ordered to get us through these toughest of times. Luckier still is the fact that St. Louis’ bench is deep, with talent including Ms. Hy-C and her Fresh Start band, a group that took home the top honors in the 35th annual International Blues Challenge in Memphis last year. Beating out more than 200 fellow competitors from across the world, the group secured a prize that included $3,000 in cash, recording time at Showplace Studios in New Jersey and slots at several blues festivals all over the country. Those honors came with special recognition from St. Louis' Board of Aldermen as well, who passed a resolution recognizing the achievement and remarking that "this success puts [St. Louis] squarely on the map." That’s high praise indeed, and while we’re not trying to make comparisons to the incomparable Kim Massie, we are thankful that St. Louis’ long legacy of blues and soul talent will live on in her memory.
If the Shoe Fits: We’d be doing a disservice to throw the word “legendary” around willy-nilly, but in the case of both Massie and St. Louis mainstay Roland Johnson, it’s more than apt. Johnson will join Ms. Hy-C & Fresh Start onstage at the Lot for this show, lending his soulful voice to the festivities. Tickets can be purchased by the two- or four-person outdoor pod at jamopresents.com/tickets.

Planet Afropunk: A Free Digital Festival
4 p.m. Friday, October 23 through Sunday, October 25. Live-streamed event. Free. planetafropunk.com.
Afropunk Fest, the annual celebration of music, arts and culture created by Black artists that is now international in scope, returns in digital form this year, thanks of course to COVID-19. This year's virtual fest will feature artists from across the world, including Common, Bootsy Collins, Kenyan rapper MC Yallah, Soweto punk group TCYIF, Ari Lennox, Tobe Nwigwe, Serpentwithfeet and St. Louis’ own Smino. The three-day event is entirely free, and in addition to the music it will feature a lineup of speakers — including the Daily Show's Dulcé Sloan, journalist Ivie Ani, actress Amanda Seales and activist Tamika Mallory — educating viewers on matters important to Black culture here in the United States and across the world. The festival will also feature immersive "digital destinations" — an art gallery, a look at Black hair “through the eyes of creators, innovators, visionaries and artists,” and discussions about prison reform, systemic racism and the criminal justice system. In total, the program of events is sure to be entertaining, but just as important, it will be enlightening as well.
Several Good Causes: Though you can technically take in the full Planet Afropunk experience without lightening your wallet, organizers are encouraging viewers to kick some money to a variety of social justice causes, in keeping with the fest’s long-running woke mindset. The Bail Project, Equal Justice Initiative, Black Futures Lab, Color of Change, Movement for Black Lives and Fair Count are all worthy organizations, and you should consider throwing them some cash if you are able. For more information, visit planetafropunk.com.