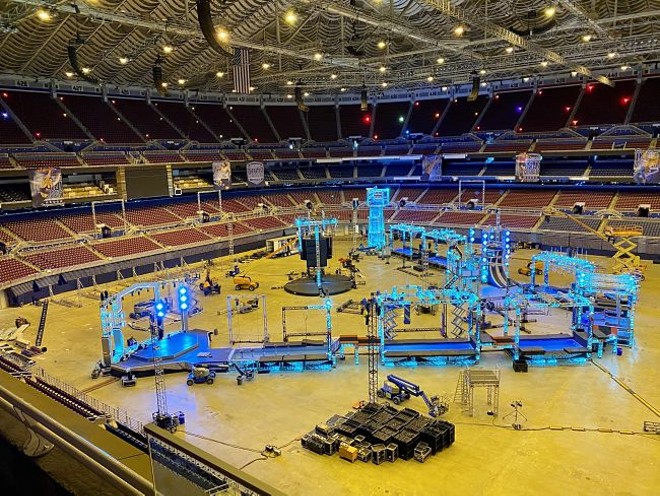 Local fans of prodigious levels of upper body strength and watching people play around on monkey bars on national television will get to feel an added dose of hometown pride when tuning in to American Ninja Warrior's season premiere on September 7, for one really good reason: The entire new season was filmed right here in St. Louis.

As confirmed by a press release from Explore St. Louis sent Wednesday evening, the Dome at America’s Center played host to some 150 competitors from June 29 to July 25 while crews filmed the show's 12th season — the first series to be filmed for the NBC network since the start of the COVID-19 crisis.

Sporting organizations across the country have grappled with the difficulties the coronavirus has brought to their competitions (*cough St. Louis Cardinals cough oh shit I better get this cough tested cough*) but American Ninja Warrior has the distinct advantage of being a solo activity, with only one competitor on the course at any given time.

Still, there's a lot of people behind the scenes making the show happen, and large groups of people can obviously easily spread this disease. According to the statement, "more than 5,000 hotel room nights were used by contestants and production staff" over the month of filming.

But, working with NBC's production crew, the team at America's Center took steps to make sure that the competition could go on safely, the statement says.

“St. Louis was more than prepared to host NBC’s production crew for American Ninja Warrior,” says Kitty Ratcliffe, president of Explore St. Louis. “As part of our early response to COVID-19, we sought expert direction from public health professionals to develop and implement health and safety protocols critical to successfully holding events... From our local hotels to our restaurants and more, everyone had a hand in successfully and responsibly hosting this sizable production. We can’t wait to see the show and thank NBC for their invaluable partnership."

The statement goes on to explain that the large production was a boon for local workers and businesses as well — local equipment rentals including vans, lifts, and carts were used to help get things set up, and St. Louisans in the fields of security, medical personnel, skilled labor, and housekeeping were put to work as well.

“It took a village," says Matthew Dewey, senior vice president and general manager of America’s Center. "This was indeed a true collaboration between the facility, event staff, St. Louis City Public Health Department, local unions, NBC and more to make it a success.”

This isn't the first time St. Louis has made its mark on the show in a fairly visible manner. Last season, the city's own Ryan Phillips, guitarist and co-founder of rock band Story of the Year, competed on the program. Though he did not make it to the finals, Phillips had nothing but glowing things to say about his experience.

"I literally couldn’t stop smiling the entire time I ran the course," the guitarist wrote on Instagram at the time. "I’m positive I looked like a complete idiot! But it was UNREAL! Thank you, ANW for making a dream come true for me today."

The first episode of the show's twelfth season will air on September 7. Check out a promo for the upcoming season below: