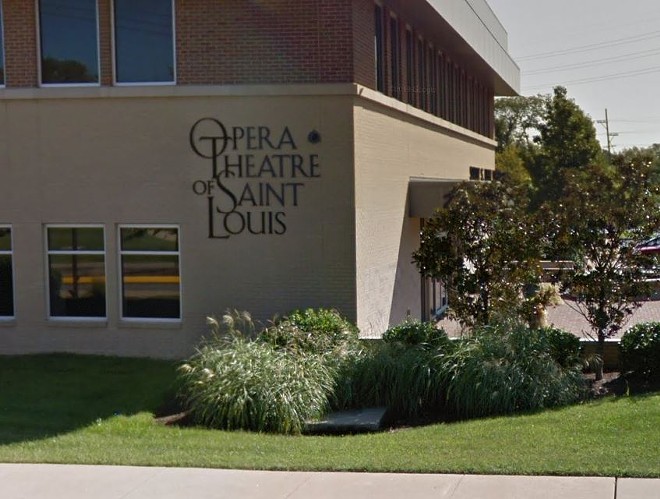 On Tuesday, just over a year after Opera Theatre of Saint Louis announced the hiring of Damon Bristo as its director of artistic administration, the rising star in St. Louis' opera community quit his job and has all but disappeared from the company's web presence after it was revealed he'd been arrested last month on suspicion child sex trafficking.

The arrest appeared to catch the opera company by surprise.

"Upon learning of the arrest, the employee was immediately placed on unpaid administrative leave and later resigned," said company general director Andrew Jorgensen in a statement released Tuesday.

It was on that same day — more than two weeks after Bristo's arrest — that the opera singer and industry watchdog Zach Finkelstein posted Bristo's mugshot as it appeared on STLMugshots.com, a site that pays for access to official repositories of arrest data and then publishes that information, including mugshots, online and in print.

According to a website that collects arrest data in the St. Louis region, on July 23rd, 2020, Opera Theatre of St. Louis @OTSL director of artistic administration, Damon Bristo was arrested and charged with child sex trafficking in the 2nd degree.

Will @OTSL issue a statement? pic.twitter.com/PV0L4JrzaJ


St. Louis County Police confirmed that Bristo had been arrested July 22 and released, KSDK reported. A search of online court records shows no formal charges filed in connection to the arrest.

RFT reached out to the St. Louis County Prosecuting Attorney on Wednesday, but our questions were not answered by publication.

Without charges from the county prosecutor, the charge listed with Bristo's arrest, for second-degree child sex trafficking, represents allegations from the arresting officer.

According to the Missouri statute, the charge of second-degree trafficking can apply to someone who benefits from or causes by "any means, including but not limited to through the use of force ... a person under the age of eighteen to participate in a commercial sex act, a sexual performance, or the production of explicit sexual material."

If convicted, the charge carries a ten-year minimum sentence.

Bristo's hiring as artistic director in August 2019 made him the successor to Paul Kilmer, who had served in the role for more than 35 years. Previously, Bristo had been a vice president at Columbia Artists, where he'd represented opera singers including mezzo-soprano Isabel Leonard, bass-baritone James Morris and soprano Amanda Majeski, according to a St. Louis Post-Dispatch story about his hiring.

This summer, like much of St. Louis' performing arts scene, the company has suffered a complete cancelation of its scheduled season, including performances of Carmen, Die Fledermaus, and the world premiere of Awakenings (based on the memoir by Oliver Sacks.)

Instead, the company produced a series of virtual events that featured its performers and staff, including "Tent Talks"; Bristo himself was featured in coverage of the company's virtual season in the Post-Dispatch.

As of Wednesday, the "Tent Talk" videos appear to have been removed from the company's Facebook page.

Reached by email on Thursday, a spokeswoman for Opera Theatre Saint Louis did not answer questions about when the company learned of Bristo's arrest. She referred inquiries back to the company's earlier statement attributed to Jorgensen, which concluded, "We have a strict code of ethics and strong values that we expect our employees to uphold inside and outside of the workplace.”

In comments to St. Louis Public Radio, soprano Angel Azzarra said the news of Bristo's arrest and resignation came "out of left field."

"I mean we’re all devastated," she said. "It’s a horrible blow."