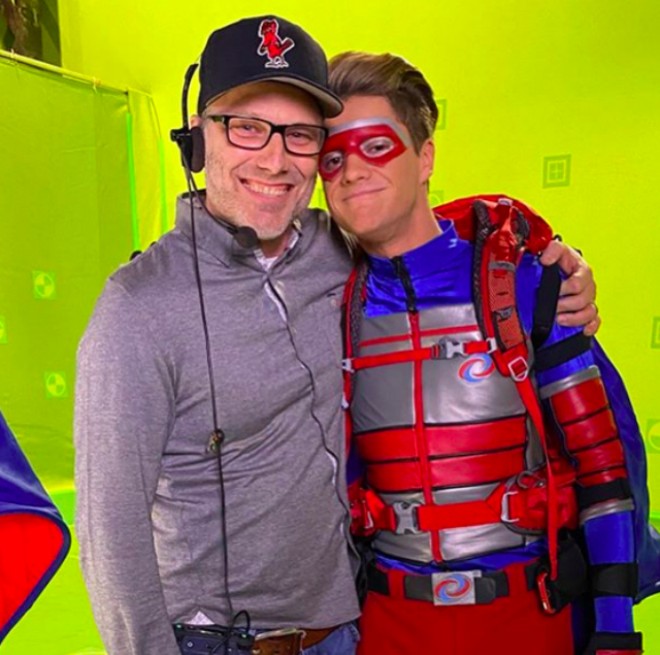 St. Louis native Mike Caron has spent years working as a director for Nickelodeon. His most recent project is the creation of his show Danger Force, a spinoff of the popular Henry Danger.

A few months ago, when the quarantine became a way of life for Californians (and everyone else), Caron and his team of actors, writers and producers had an idea: What if they could continue making content for their audience while remaining isolated? They decided to try.

Much of the entertainment industry is shutdown as a result of the pandemic. Caron says only three episodic television shows have been able to create, film and release new content, and Danger Force was one of them.

The pilot episode aired in early March, right as people started staying home. The next six episodes, which had already been shot, continued on a weekly schedule after that. But as the pandemic dragged on, Caron could either shut down or find another path forward.

So with little to do and nowhere to go during the lockdown, the Danger Force team decided to keep filming, remotely. Kids loved the show — so much so that Nickelodeon agreed to greenlight the experimental episode. This one was shot completely on Zoom in the actors' homes.

Chris Nowak, show runner and head writer, wrote a script for the Zoom episode the same way he would for on-stage shooting. The next step was figuring out how to translate the script to a "Zoom set."

One of the main challenges in filming the show this way was upholding the authenticity. Danger Force is a superhero show, with lots of effects and off-screen tricks to make things look real to the audience.

Despite the technological difficulties, Caron and his team were able to deliver computers, costumes, cables and set pieces such as green screens to the actors' homes. Everything was as normal as they could manage, doing table reads over Zoom, rehearsal days over Zoom, and finally, filming the actual episode all on Zoom.

"I think we turned the whole thing over in four weeks," Caron says.


He says this was the most rewarding thing he's ever done.

"We didn't stop. We kept trying to do better, moving forward. It was still Danger Force. It was still funny. The actors were still awesome. I'm very proud of that."

One of the reason Caron and his team continued the show on Zoom was the ability his and the actors' ability to connect to their audience through social media. Caron uses social media to invite fans to take an inside look at what goes on backstage while they make Danger Force. Over the past few months, he's accumulated a massive following on Tik Tok. He has 1.6 million followers, mostly fans who love keeping up with the show and the cast. Caron says he wants the audience to feel involved in the show, and the actors loved the increased communication with the fans.

"It's my personal way of giving back to the fans. They do so much for us — watch the show, make fan accounts. This is like my 'thank you, guys, for being such awesome supporters,'" Caron says.

The quarantine episode did so well with audiences that the crew and Nickelodeon decided to keep going. They wrote, filmed and produced five mini-shorts, each about five minutes long, all on Zoom, to be sure fans could still get a taste of the show.

Caron says the shorts are just another way to thank the audience.

"In kids TV, the audiences are so passionate. These kids love the show so much we feel it very important that we want to give as much good content as we can," he says.

The first short is now available on Nickelodeon and the YouTube channel and aired on August 8. The shorts will air every Saturday until the beginning of September.

Correction: Jace Norman's name was incorrect in a photo caption for this story. We regret the error.