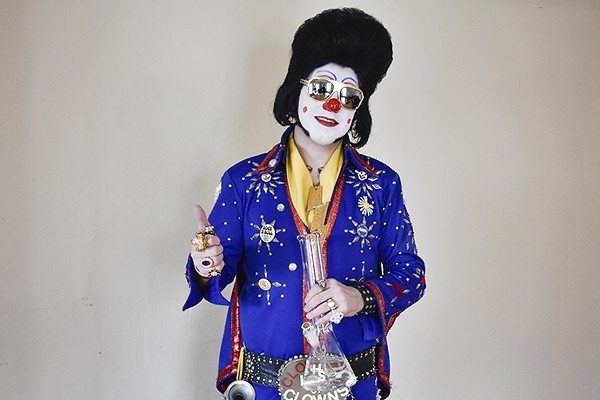 Your favorite clown and ours, Clownvis Presley, has been taking to Facebook Live five nights a week since lockdown began to bring joy to his many fans.

His show, Clownvis to the Rescue, has become appointment viewing, with many viewers pouring drinks and frying up chicken wings before sitting down with the King of Clowns for an hour or so of escapist good times.

Though the show is essentially just Clownvis speaking to a live camera from his secret hideaway (could be a basement mini-studio), Clownvis brings quality entertainment in a variety of forms. He’s a hybrid comedian / entertainer / singer and watching him is like witnessing an OG Branson act on mushrooms. 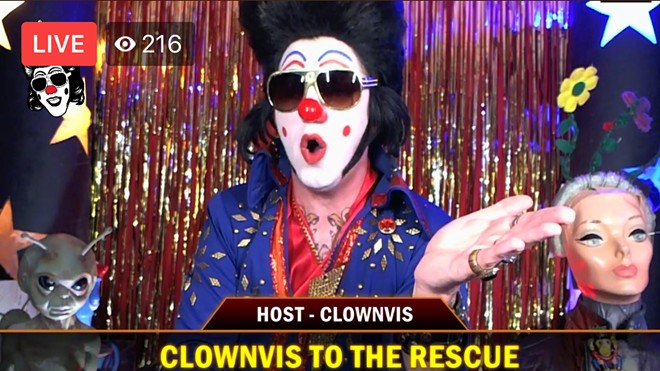 His unique style has earned him tons of recognition. Clownvis started getting national attention after a legendary appearance on America’s Got Talent. And in addition to being our official bong tester,

Lately he’s been out on multiple tours with Insane Clown Posse and he was also scheduled to perform at KROQ’s big April Foolishness show with Adam Carolla, Fortune Feimster, Jeff Garlin, Jen Kirkman, Adam Ray and Steve-O, but that show was canceled along with everything else this spring. He was also scheduled to tour this year with the Supersuckers and with Metalachi, but it remains to be seen if those shows will occur.

Clownvis’ connections with the clown family remain tight, however, and he scored a coveted and exclusive interview on Clownvis to the Rescue with Insane Clown Posse's Violent J right after the world figured out that “Even ICP Is Being More Responsible About Coronavirus Than the Missouri GOP.”

It’s not just celebrity interviews that Clownvis is offering, though. Clownvis has also been a hero to many during these times for supplying not just a reliable distraction from current life, but because he’s also raised thousands of dollars for charity by raffling his own Clownvis face masks.

So if you’re down with the clown or just down to clown around, check out Clownvis to the Rescue at 9 p.m. most weeknights on Facebook.