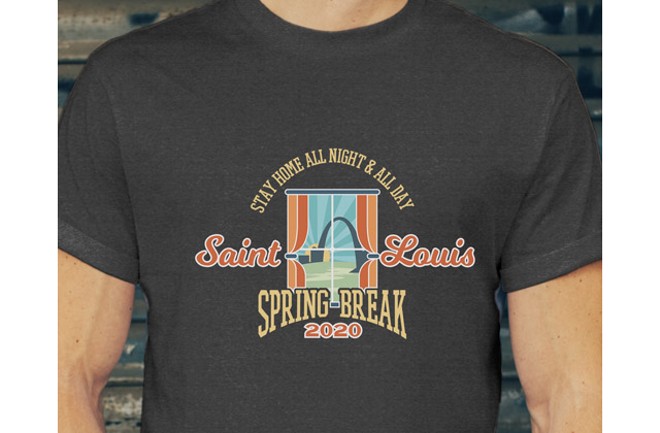 In the face of all the doom and gloom, local fiction writer Kellie Lynch wanted to spread some positivity.

They designed a T-shirt commemorating the city’s, for lack of a better word, shitty spring break.

“I’ve been on social media a little too much lately. It’s just a constant stream of things falling apart,” Lynch says. “It makes me want to put a little optimism out there.”

Money from the T-shirt sales will go toward gift cards from local businesses. Lynch will then give the gift cards away to local charities.

Lynch isn’t the only one who had the idea of selling T-shirts to benefit the St. Louis community.

All profits made from Marquand’s shirts will go to the Gateway Resilience Fund. Money donated to the campaign will go toward hospitality workers who recently lost their jobs. Although, if anyone not in the hospitality industry needs money due to cut hours, they can email Marquand directly.

As of this writing, the campaign has raised nearly $6,000 of a $10,000 goal. Marquand worked as a server for two years and says she understands “living paycheck to paycheck.” Her Thrive Book was supposed to launch later this year. But with everything going on, Marquand doesn’t know what’s going to happen.

“Our whole mission is to stimulate the economy of restaurants,” Marquand says. “If we can’t do that by selling the book, then I wanted to do something else to help restaurants here and the people who work for them.”

Lynch’s T-shirts sell for $20 each. The shirts will be for sale until March 31 on Etsy. They’ve designed T-shirts as a side hustle in the past, but usually only sold a couple to their friends. Like a lot of people (or what a lot of people should be doing) Lynch self-quarantined this week, but they used the extra time to design the shirt.

“I was trying to think of ways to help the community, and the T-shirt idea just came to me,” Lynch says. “I could use the profits to put back into the St. Louis community.”

“I think it really demonstrates the strength we have as a community,” Marquand says. “We have something special here—we all genuinely care about each other.”

Editor's note: This story was updated after publication with new information about donations to the Gateway Resilience Fund.