Get hydrated, because St. Louis' annual dual celebrations of St. Patrick's Day take place this week [NOPE, THEY'RE BOTH POSTPONED. READ MORE HERE]. If you'd rather not parade (c'mon, everybody loves a parade), we got options. A classic comedy, a musical rendition of a medieval legend, King Kong. Take your pick.

1. Rich in Romance
The last person socialite Tracy Lord wants to see just days before her wedding is her ex-husband, C.K. Dexter Haven. And yet here he is in the family home, welcomed by everyone except her. Self-made man George Kitteridge is to be her new husband, and nobody — including Dexter — thinks Tracy and George are a good match. Then society reporter Mike Connor shows up to cover the nuptials, throwing one more man into the mix. Tracy flirts and argues with all three men and comes to realize there may be a downside to being placed on a pedestal by a man, even if he is your husband. Philip Barry's romantic comedy The Philadelphia Story is shot through with witty dialogue and a mischievous sense of humor, with Tracy as the straw that stirs the cocktail. Clayton Community Theatre presents the comedy at 8 p.m. Thursday through Saturday and 2 p.m. Sunday (March 12 to 22) at the Washington University South Campus Theatre (6501 Clayton Road; www.placeseveryone.org). Tickets are $15 to $25.

2. To Hell We Go
[THIS EVENT HAS BEEN CANCELED]Stéphane Denève, the St. Louis Symphony musical director, considers Hector Berlioz's The Damnation of Faust to be a desert-island performance, and it's small wonder. Berlioz's hybrid opera/cantata requires a massive orchestra, a full chorus and a small but vital selection of solo voices to bring the piece to life. Denève ups the ante by adding the St. Louis Children's Choirs to the St. Louis Symphony Chorus for a pair of performances of the infernal legend. Tenor Michael Spyres will sing the role of Faust, a despairing scholar who contemplates drinking poison to end his misery. At that moment Mephistopheles (bass John Relyea) appears and offers Faust youth, happiness and whatever else he desires, and the Beast will even throw in the beautiful Marguerite (soprano Isabel Leonard) at no extra charge. It's a bargain, but it seems like there should be a catch. Berlioz's Damnation is darkly majestic, and the horripilating passage "Ride to the Abyss" is not soon forgotten. The Damnation of Faust is performed at 8 p.m. Friday and Saturday (March 13 and 14) at Powell Hall (718 North Grand Boulevard; www.slso.org). Tickets are $15 to $87.50.

3. The Long Echo
[FRIDAY NIGHT OPENING CANCELED]History has a habit of flattening the famous figures of the past, relegating them to a single accomplishment or moment. American artist Terry Adkins used a multidisciplinary practice of visual art, extensive research, site visits and performance (which Adkins called recitals) to create a fuller picture of these simplified historical figures. In his lifetime, Adkins delved into the lives of Jimi Hendrix, Bessie Smith, George Washington Carver, the abolitionist John Brown and Arctic explorer Matthew Henson. His abstract sculptures and use of found objects, each of them containing an untold history, were activated by Adkins' recitals, which often incorporated music. His frequent collaborators were the Lone Wolf Recital Corps, which featured a rotating cast of artists and musicians. Terry Adkins: Resounding, the new exhibition at the Pulitzer Arts Foundation (3716 Washington Boulevard; www.pulitzerarts.org), is a career-length retrospective of Adkins' work and interests. In addition to his early sculptures and works on paper are many of the objects he collected, such as musical instruments, books and records. The Lone Wolf Recital Corps will also perform during the months-long show. Terry Adkins: Resounding opens with a free public reception from 6 to 9 p.m. Friday, March 13. The show remains up through August 2, and admission is free.

4. Baker's Blues
[THIS EVENT HAS BEEN CANCELED]The two things you most want at your wedding are your loved ones and a beautiful cake, but both are looking unlikely for Jen. In her small hometown, Della is known for her baking skills, and Jen considers her like family. So when she asks Della to bake her wedding cake, she doesn't expect to be rebuffed. What's the problem? Jen's betrothed is Macy, and Della can't square a lesbian marriage with her religious beliefs. Bekah Brunstetter's play The Cake is inspired by a similar U.S. Supreme Court case but explores the conflict between personal and political beliefs without demonizing either side. The Repertory Theatre St. Louis presents The Cake Tuesday through Sunday (March 13 to 29) at the Loretto-Hilton Center (130 Edgar Road; www.repstl.org). Tickets are $46 to $71.

5. For Ireland
[THIS EVENT HAS BEEN POSTPONED. READ MORE HERE.] The Downtown St. Patrick's Day Parade marks its 51st anniversary this year, and if the weather holds out, an anticipated 350,000 people will be there to celebrate St. Louis' Irish heritage. It all starts at noon Saturday, March 14, at 20th and Market streets (www.irishparade.org), with more than 130 units, floats, bands marching and the always popular inflatable characters sailing overhead. There's also the Irish Village to consider, which features live music and drink and food for sale. Admission to the parade is free.

6. The Big Gorilla
There have been several King Kong movies and sequels, but none of them come close to the original 1933 film. Starring Fay Wray and Willis O'Brien's incredible stop-motion special effects, this version of Kong remains the top banana of all giant ape movies. Wray plays aspiring actress Ann Darrow, who's hired for a mysterious film that will be shot on a remote island. That island turns out to be a prehistoric paradise for dinosaurs, giant creatures and a massive ape named Kong who the natives worship as a god. When Ann is sacrificed to the mighty Kong, he's smitten by her beauty and takes her first to his mountain aerie, and eventually to New York. Turner Classic Movies and Fathom Events join forces to get King Kong back in cinemas for one day only. You can see it locally at 4 p.m. Sunday, March 15, at Marcus Ronnies 20 Cine (5320 South Lindbergh Boulevard; www.fathomevents.com). Tickets are $13.47.

7. Dogtown's Day Out
[THIS EVENT HAS BEEN POSTPONED: READ MORE HERE] It doesn't matter what day of the month St. Patrick's Day falls on, the Ancient Order of Hibernians will always celebrate Ireland's patron saint with a parade and festival on March 17. In keeping with the AOH's desire to return their party to its neighborhood, family-friendly roots, there are more changes in place for this year's Dogtown St. Patrick's Day Parade, but it will still feature families marching, floats and salutes to the history and culture of Ireland. The actual parade starts at 11 a.m. at the intersection of Tamm and Oakland avenues (www.stlhibernians.com) and usually runs for 90 minutes. After that, the Irish Festival kicks off along the side streets, and the various restaurants and bars will do brisk business until 6 p.m., when all outdoor sales and events close. At 8 p.m., all businesses along Tamm will close. Remember to keep your celebrating friendly; this is a family neighborhood, and there are kids present. No outside alcohol is allowed, and all coolers and backpacks will be searched as you enter the neighborhood through a checkpoint. There are 25 checkpoints through which you can enter and leave, and security will be stationed at all of them, so don't try it. Underage drinking is going to net you a potential $500 fine. 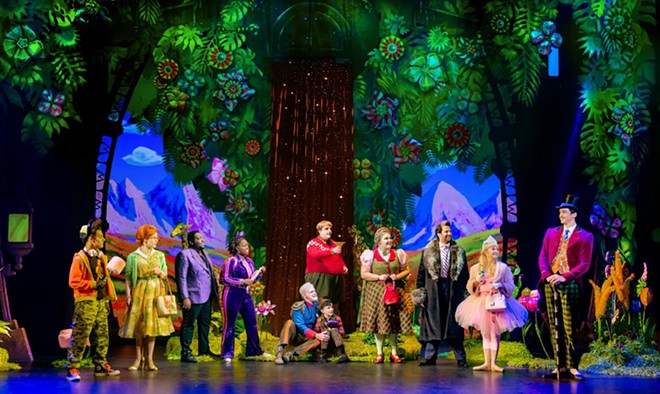 8. Candy Chaos
[THIS EVENT HAS BEEN POSTPONED]Charlie Bucket is so obsessed with candy that his dream is to tour the factory of famous candymaker Willy Wonka. The Bucket family's financial difficulties mean he only gets one chocolate bar a year (it's his birthday present), so he bides his time inventing new types of candy. When Willy Wonka announces a contest in which the winners will get to tour his factory and receive a lifetime supply of candy, Charlie knows he can win. But what happens inside the factory will test his nerves, imagination and moral compass. Roald Dahl's beloved children's book Charlie and the Chocolate Factory has been adapted into a musical by the creative team behind Hairspray. The musical has a more contemporary setting and rejiggers some of the original story elements, but it does incorporate songs from the 1971 film to go with a mostly new score. Charlie and the Chocolate Factory is performed at 7:30 p.m. Tuesday through Friday, 2 and 7:30 p.m. Saturday and 1 p.m. Sunday (March 17 to 29) at the Fox Theatre (527 North Grand Boulevard; www.fabulousfox.com). Tickets are $29 to $105.