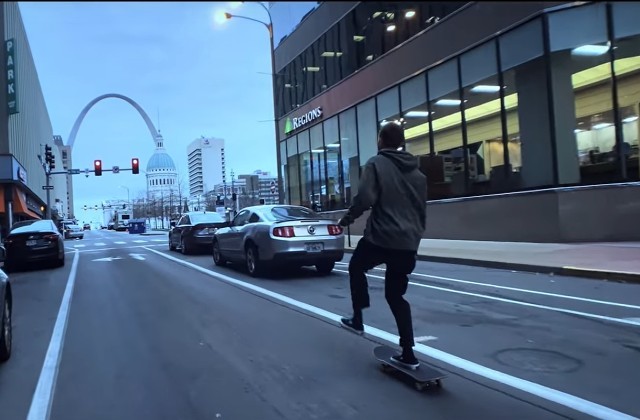 St. Louis' own professional skater Steve Berra first heard about Tyler Peterson on Instagram almost six years ago. Peterson tagged Berra in one of the videos he posted of him skateboarding. When he watched the video, Berra noticed three things about Peterson.

Peterson and Berra do have a lot of the same qualities. The two moved at the ages of 17 and 18, respectively, to California to kickstart their professional careers. Both skaters married young — Berra married Juliette Lewis, film icon of the 90s, at the age of 26. (They've since divorced.) Peterson married his high school sweetheart at the age of 20. Both are fathers. Both still have their passion for skating.

Now, the professional skaters teamed up for a new mission to make their own video series entitled "Never Stop Pushing."  Peterson stars in the five-minute clip. The two have spent the last three months recording the video on and off. It digs into Peterson's life as a skater in St. Louis.


"Everything is based in St. Louis for me," Peterson says in the video.

As the 21-year-old is seen skating through the streets of St. Louis with the Arch behind him, the story goes deeper. Peterson lost his dad at the age of 20 and then became one himself just three months later. His son, Azai, was born prematurely after a routine checkup on his now-wife Maryah went south.

These tragedies never stopped Peterson, though. He had his father in mind as he recounted the lessons he had learned in the video — how to take care of his family, how to be kind to others, how to be a good person, and perhaps the most important one.

Berra posted the teaser to the video to his Instagram account earlier this week. In the caption, Berra describes Peterson as a humble young skater.

"I'm so proud of him and could've spent hours telling his story. However, these five minutes will have to suffice for now," Berra wrote.