The Best Things to Do in St. Louis, February 27 to March 4 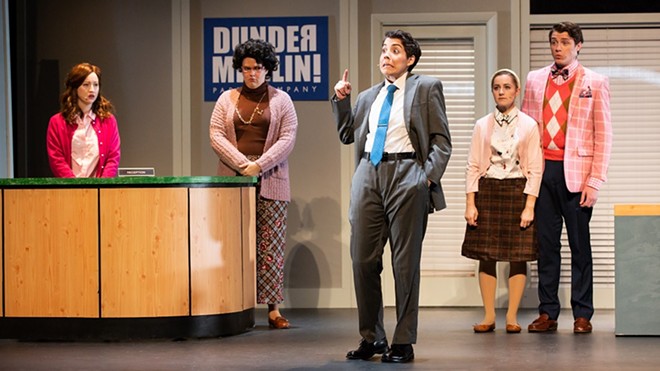 Everybody gets an extra day this year courtesy of our crazy calendar system, and this time around it's a Saturday. What will you do with your 365th day? A few helpful suggestions follow, but don't feel any pressure. It's a bonus day, use it as you please.

1. A Non-Martial Artist
King Hu's martial arts epic A Touch of Zen is not your standard Hong Kong action film. It has an atypical protagonist in Ku (Chun Shih), a somewhat clumsy artist who gets caught up in the life of the beautiful fugitive Yang (Feng Hsu). Yang's father tried to expose the corruption of General Shih, the head of the secret police. Now he's dead and Yang's on the run from General Shih and his men. A Touch of Zen has a strong spiritual element to it, with holy men and ghosts playing a part in the action. A newly restored version of the film, complete with original Cinemascope framing and saturated colors, is showing at 7 p.m. Thursday, February 27, at Webster University's Moore Auditorium (470 East Lockwood Avenue; www.webster.edu/film-series). Tickets are $5 to $7.

2. Trans-Theatrical
With the success of last year's Transluminate short play festival, the Q Collective looks to make the celebration of non-binary/transgender plays and people an annual event. The second edition, Transluminate 2020, features five new short plays. Zach Barryte and Rachel Bowens-Rubin's "Another Kin" is about a human who wants to transform into a different species but is undecided about which to choose; with the aid of a spaceship, the person travels the galaxy in search of the ideal new species. "Transcodicil," by Peter Dakutis, is about transgender couple Joe and Shawna. Joe is carrying their baby, a fact that may stop him from receiving his inheritance because of a codicil added to his aunt's will at the behest of Joe's transphobic mother. Transluminate 2020 takes place at 7:30 p.m. Thursday and Friday, and at 4 and 7:30 p.m. Saturday and Sunday (February 27 to March 1) at the Chapel (6238 Alexander Drive; www.theqcollective.theater). Tickets are $20 to $25, but the Thursday night performance is pay-what-you-can.

3. Leap Day Battle
The St. Louis Blues and the Dallas Stars have already met twice this month, so with one extra day in February courtesy of the Leap Year, what team will the Blues play? The Dallas Stars, of course. The teams are currently battling for first and second place in the Central Division and the Western Conference, so this is a classic example of a four-point game. And with only sixteen games left in the regular season, every win counts. The Blues and Stars face off at 7 p.m. Saturday, February 29, at the Enterprise Center (1401 Clark Avenue; www.stlblues.com). Tickets are $65 to $314.

4. Undefeated
The women of the Arch Rival Roller Derby teams are down to their final two games before the championship, and two of the teams remain unbeaten. The M-80s and the Smashinistas will face off at 6:30 p.m. Saturday, February 29, at the Midwest Sport Hockey Complex in Queeny Park (570 Weidman Road; www.archrivalrollerderby.com), and only one team will still be unbeaten when it's all over. In the second bout of the night, the Stunt Devils will go against the Rebel Skate Alliance. It's also alumni night, with the league's early stars coming home to celebrate the fifteenth anniversary of St. Louis' ladies flat-track roller derby. Tickets are $8 to $12.

5. The Best of China
More than 5,000 years of Chinese culture are celebrated through the ancient art of Chinese classical dance in the forever-touring Shen Yun. A full orchestra, lavish costumes and high-tech scenery combine to deliver a feast for your senses, while more than 100 dancers recreate the tales of poets, philosophers, generals and supernatural beings. Shen Yun takes place at 2 and 7:30 p.m. Saturday and 2:30 p.m. Sunday (February 29 and March 1) at the Stifel Theatre (1400 Market Street; www.stifeltheatre.com). Tickets are $80 to $150.

6. Positively Hitchcockian
Richard Hannay goes out for some light entertainment one night, which is interrupted when shots ring out in the theater. He soon ends up with a mysterious woman in his arms, who reveals that she's a spy trying to track down a cabal that's going to sell British military secrets. Before the night is out, she's dead and Hannay is on the run. All he knows about his hunters is that they have something to do with the mysterious "39 Steps" and the group's leader is missing the tip of a finger. Alfred Hitchcock's 1935 thriller The 39 Steps was ground zero for many of his most popular themes. There's a MacGuffin (the unexplained military secrets), the arrival of a beautiful blonde (Madeline Carroll) who wants nothing to do our hero (despite being handcuffed to him at one point) and the everyday man (Robert Donat) who is forced to flee for his life. The Classics in the Loop film series presents The 39 Steps at 4 and 7 p.m. Monday, March 2, at the Landmark Tivoli Theatre (6350 Delmar Boulevard, University City; www.landmarktheatres.com). Tickets are $7.25.

7. Scranton Sings!
The Office has been off the air for about seven years now, not that you can tell. People (particularly younger people) still religiously watch — and quote — NBC's faux-documentary about the employees of a Scranton paper supplier and their ineffectual man-child boss. Is it because the sitcom is essentially comfort food in a world with fewer comforts every year? Is it because of the internet nostalgia machine, which constantly repackages clips, celebrates the anniversaries of major events within the show and offers new theories on the true identity of the Scranton Strangler (it was Bob Vance, Vance Refrigeration)? Whatever the reason, the show remains a touchstone for a couple generations. Enter The Office! A Musical Parody. This two-hour show recreates the biggest moments in the show through the magic of song, with winks and nods toward the later jobs of the various actors. The Office! A Musical Parody is performed at 8 p.m. Wednesday through Friday, 3 and 8 p.m. Saturday and 2 p.m. Sunday (March 4 to 8) at the Grandel (3610 Grandel Square; www.thegrandel.com). Tickets are $34 to $69.