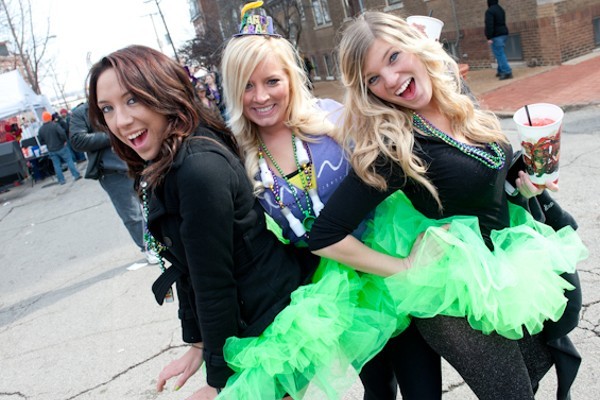 Most of St. Louis is praying for warm weather on Saturday, because the Mardi Gras Grand Parade is your chance to blow out your ya-yas (interpret that how you will). But that's not all there is to do this week; read on, party monsters...

1. By a Nose
Edmond Rostand's swashbuckling play Cyrano De Bergerac is woefully underproduced, primarily because it's difficult to find actors who can effectively wield swords and Rostand's tripping verse. Martin Crimp's adaptation of the play modernizes the setting and does away with Cyrano's famous schnoz, but does feature James McAvoy as the tormented poet. This Cyrano wears contemporary outfits but still loathes his own appearance, and woos the lovely Roxanne for his tongue-tied friend. Fathom Events presents a live simulcast of the National Theatre's production of the play at 7 p.m. Thursday, February 20, at the Marcus Ronnies Cine (5320 South Lindbergh Boulevard; www.fathomevents.com). Tickets are $19.39.

2. The Contemporaries
For its first exhibition of the new year, Philip Slein Gallery doubles down on its commitment to contemporary painting. 20/20 features work by 20 artists who have shown work at the gallery previously. Participants range from local painters (Jamie Adams and Arthur Osver) to the Brooklyn-based Keltie Ferris, Connecticut's Jackie Saccoccio and the esteemed Valerie Jaudon. 20/20 opens with a free public reception from 5 to 8 p.m. Friday, February 21, at the Philip Slein Gallery (4735 McPherson Avenue; www.philipsleingallery.com). The gallery's hours are 10 a.m. to 5 p.m. Tuesday through Saturday.

3. Black Magic
Poet/playwright Ntozake Shange came to St. Louis in the 1950s as a young girl, and experienced firsthand segregation and racism in a white school. The alienation she felt stayed with her through college, at which point she began to write her "choreopoems," which incorporated non-standard English as a conscious attempt to create a separate vocabulary that better represented the black experience. Spell #7 uses this new vernacular to tell the story of a group of black artists who frequent the same St. Louis bar. One night the magician Lou uses his magic to help them all see their blackness — which they feel has caused them difficulties — as a source of strength that they should embrace. The Black Rep presents Spell #7 as part of its 43rd season, with St. Louis rapper and activist Tef Poe playing a major role in the production. Performances of Spell #7 take place at 7 p.m. Wednesday and Thursday, 8 p.m. Friday and Saturday and 3 p.m. Sunday (February 21 to March 8) at Washington University's A.E. Hotchner Studio Theatre (6445 Forsyth Avenue; www.theblackrep.org). Tickets are $20 to $50.

4. The Soulard Classic
It's been a while since everybody gathered in Soulard to celebrate the onset of the season of self-denial and contemplation, but St. Louis never forgets the big day: Saturday, February 22, is here, and so is the Bud Light Grand Parade. At 11 a.m. at Busch Stadium (601 Clark Avenue; www.stlmardigras.org), the parade starts its march toward Soulard and the Anheuser-Busch brewery. The theme is "the Blues," which is intentionally a little vague. Do you dream of clear blue skies, tropical sea sides, gutbucket music or a second Stanley Cup? It's up to each krewe to decide exactly how to interpret "the Blues." As always, watching the parade is free, and you just might catch something while you're there: More than 10 million strands of beads will be flung from floats along the parade route. The party in Soulard will have already started by the time the parade steps off — it's gonna get crowded and loud before it's all over. Will it be as cold as February normally is? If you're worried, you have options. The Bud Light Party Tent, which is in fact two climate-controlled tents, will have a lunch buffet, open bar and an appearance by Chingy from 9 a.m to 6 p.m., and tickets are $125. If your ideal Mardi Gras includes hanging out with some of the most famous and personable St. Louis Blues players in team history, you want to buy tickets for The Blues Alumni Party Tent. It also sports an open bar and lunch buffet, but adds a bubble-hockey tournament and hobnobbing with some local hockey legends. The Blues Alumni Party Tent is open from 9 a.m. to 5 p.m., and admission is $125.

5. Take a Chance
Sharon's an empty-nester whose home is even emptier since her husband abandoned her. Looking to reinvigorate her social life, Sharon decides that a roommate may be just the thing to shake up her life — but how much shaking can she stand? Her new roommate, Robyn, enjoys drugs and free love — and is a vegan, all of which is foreign to the middle-aged, Midwestern lifestyle Sharon grew up with. Sure, it's a lot of adjustments to make to one's life, but isn't that what Sharon wants? Jen Silverman's comedy The Roommate follows two very different women as they discover how to live their best lives. West End Players Guild presents The Roommate at 8 p.m. Thursday to Saturday and 2 p.m. Sunday (February 21 to March 1) at the Union Avenue Christian Church (733 North Union Boulevard; www.westendplayers.org). Tickets are $20 to $25.

6. Ka-Kaw Is Law
Aggrieved St. Louis Rams fans and the curious and hardcore XFL fans alike shall converge upon the Dome at America's Center (701 Convention Plaza Street; www.xfl.com/teams/st-louis) for the St. Louis BattleHawks inaugural home opener at 2 p.m. Sunday, February 23. The team will take on the New York Guardians, whose logo appears to be some sort of cat (when has a cat ever guarded anything?). While the BattleHawks' online fan base is vocal and borderline deranged with passion, this will be the first chance BattleHawks fans have to back their mighty birds on their home turf and establish a team culture. Tickets for the historic game are $24 to $108.

7. New York Story
Jonathan Larson's musical Rent changed how people approached the form when it swept onto Broadway in 1996. Larson crafted a story about real people rather than creating a spectacle, using his characters — a group of twenty-something artists trying to make it without selling out — to connect with audiences in a way that descending helicopters and plummeting chandeliers could not. Two decades later, the show still resonates with audiences, so Rent is back on the road. The twentieth anniversary tour (plus a couple years) of Rent comes to the Fox Theatre (527 North Grand Boulevard; www.fabulousfox.com) for five shows this weekend. Performances are at 7:30 p.m. Friday, 2 and 7:30 p.m. Saturday and 1 and 6:30 p.m. Sunday (February 21 to 23). Tickets are $29 to $105. 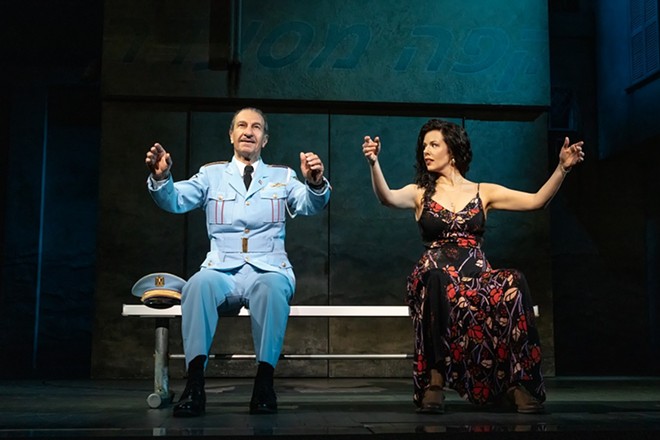 8. The Food of Love
An Egyptian police band is scheduled to perform in an Arabic enclave in Israel, but ends up instead in a small town in the Israeli desert. Their arrival provides some much-needed excitement for the residents, and offers the musicians a chance to meet some regular Israelis in a casual environment. What both sides discover is that loneliness and the need to be loved are all part of the universal human condition, and that a little music makes every situation better. David Yazbeck and Itamar Moses' Tony Award-winning musical The Band's Visit finally arrives at the Fox Theatre (527 North Grand Boulevard; www.fabulousfox.com) for a lengthy run. Performances are at 7:30 p.m. Tuesday through Friday, 2 and 7:30 p.m. Saturday and 1 p.m. Sunday (February 25 to March 8). There's an additional 6:30 p.m. show on Sunday, March 1. Tickets are $29 to $99.