How Much Reality Will MTV’s New Show About the Busch Family Share? 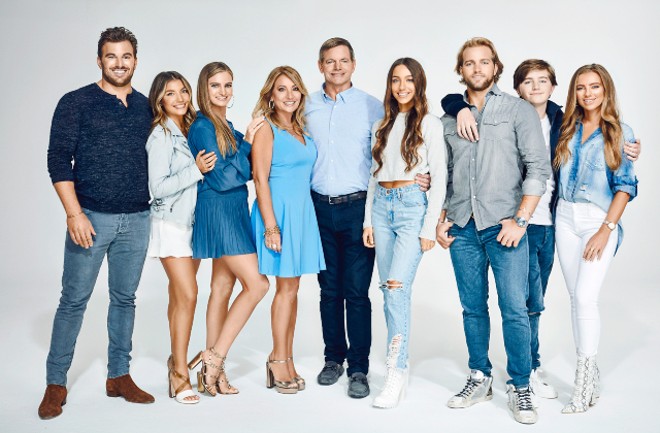 St. Louis has long been in the national spotlight for its historic and prolific beer industry. Anheuser-Busch is still easily the most famous brewery in town, having been founded in 1852 (and just as famously sold to InBev in 2008).

Now, Billy Busch Sr., the great-grandson of A-B co-founder Adolphus Busch, is about to enter the national spotlight with his wife and kids as the stars of The Busch Family Brewed. (Although we'd be remiss not to note that Billy Busch Sr. never worked for A-B.) The new MTV reality sitcom debuts this spring.

Billy will appear alongside his wife, Christi, and their seven children. In a press release issued yesterday, MTV introduces each of the Busch kids with memorable nicknames, kind of like they're the Spice Girls:

“Billy Jr. ‘the responsible one,’ Haley ‘the sweet one,’ Abbey ‘the wild child,’ Gussie ‘the ladies’ man,’ Grace ‘the blunt one,’ Maddie ‘the wise one’ and Peter ‘the baby.’”

The show promises to chart the family, who is said to “boast good looks and serious athleticism,” as they navigate “recent approval to break ground on a new craft brewery on their property” and embark on creating “their own original beer and continue their family legacy for the next generation.”

Most of the Busch children are adults, including Billy Jr., Haley, Abbey, Gussie and Grace, yet the release says that all nine family members live under one roof, causing “chaos [to] ensue.” The show plans to feature the Busch kids as they navigate break-ups and “huge changes” in their lives, the release continues, and "it’s up to helicopter-mom Christi to keep the peace and make sure they all stick together.”

Viewers will see all the ups and downs unfold on the family’s “over-the-top 700-acre estate with ATVs, jet skis, dogs, cats… and Clydesdales.”

This isn't the family's first foray into filming, though: Maddie appeared in Marshall's Miracle, a 2015 film about a dog named Marshall who is rescued from the Humane Society of Missouri by family in the Show-Me State. The movie starred Shannon Elizabeth, Lauren Holly and Matthew Settle and was produced by Busch Productions.

Billy’s eldest child, Scarlett Martina Busch, will not appear on the show. The MTV promo describes the Busch children featured in the reality series as a “seven-pack of kids,” something Scarlett has already seemed to have taken exception with on Facebook: 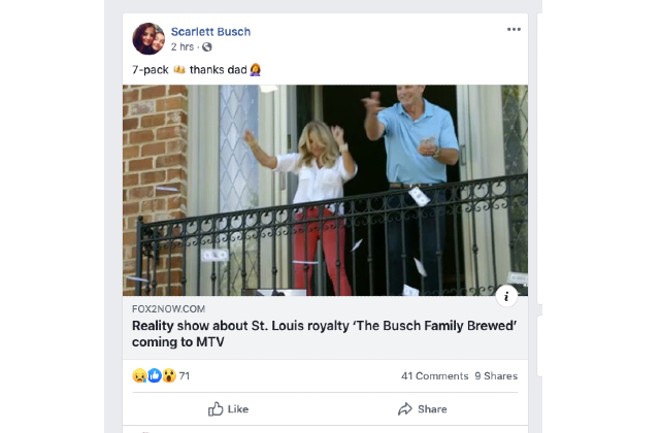 There is, for example, the 2016 assault charge again Billy Busch for allegedly manhandling a sixth grader at his son's school. Billy, 58 years old at the time, was said to have bloodied the boy's nose, dragged him by the front of his shirt and pinned him against a wall before the boy's father pulled him off, according to police reports at the time. Busch accepted a plea deal in the case in 2018. We’re guessing this won’t make it into the series — and really, perhaps that’s for the best.

The MTV promos also raises questions about the new craft brewery the family is said to be building on their 700-acre property. Billy Busch launched the William K. Busch Brewing Company with the Kräftig brand in 2011 and the company went out of business last year.

Before the brewery went under, however, Billy had announced plans to build a brewing facility and distillery for Kräftig in Defiance, Missouri. So either Billy is re-entering the biz with a new brewery for the show or the episodes were filmed before the closure was announced last summer.

We also have questions about the other stars of The Busch Family Brewed — in particular Gussie, “the ladies’ man.” The show's promo, pasted above, certainly seems to indicate that Gussie could be its breakout star.

In just 30 seconds of footage we see Gussie pop off his top, pour beer down his chest and proclaim "our business is beer; I think I want to do a little research for the company." Later a drink appears to be thrown at Gussie and then, the promo ends with someone throwing a water balloon at his crotch. Gussie doubles over, falling to the ground, and then asks for a beer.

Although Gussie doesn’t currently have a large social-media following, it’s likely that this will soon change for he and all of his siblings after MTV begins airing his family’s “down-to-earth, rowdy-good time[s]” on national television. Will Gussie’s time spent big-game hunting in Argentina, support of President Donald Trump or his bare ass appear on The Busch Family Brewed?

To find out what sides of the Busch family are shared on the show, you'll just have to tune in on Thursday, March 5 to find out.