A Downtown Church Aims to Build Community with a New Coffeehouse

It’s an art gallery within a coffeehouse within a church. We here at the Riverfront Times were confused too — so we decided to investigate.

Anchor Room Coffeehouse (1610 Olive Street), located in the lower-level of Centenary United Methodist Church in downtown St. Louis, will open its doors on February 9, first as a free collaborative art gallery. In the spring, the coffeehouse arm of the endeavor is set to debut, with plans to serve soup, sandwiches and pastries.

The coffeehouse has been an idea in the mind of Centenary's pastor, Marie Griffin, for more than a year. “I want it to be a place where people can come and build community, just like at any coffeehouse,” Griffin says.

The coffeehouse's first exhibit, “Faces Not Forgotten,” is a traveling collection of portraits of children and teens who were the fatal victims of gun violence. Artists from across the country paint the faces, which are later printed on canvas panels and made into quilt squares. 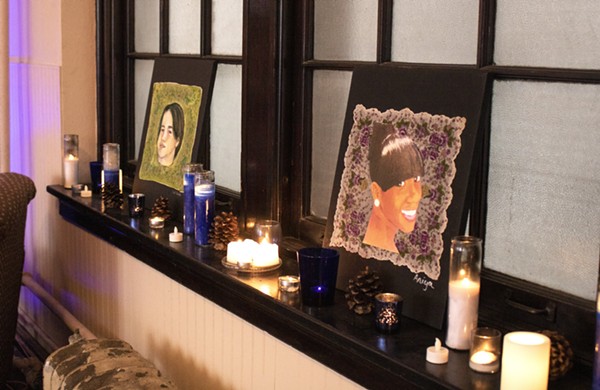 Gun violence is something the Centenary congregation has sadly endured a lot, Griffin says. Nine-year-old Xavier Usanga came to the church the Sunday before his death, the pastor recalls. He was one of twenty children shot and killed with a firearm in the city of St. Louis this past summer.

“It was devastating,” Griffin says. “Some of the kids who come to our services regularly were there when it happened. We want to honor the lives of people lost to gun violence and I think this is a great event to bring more awareness.”

The exhibit will also feature a montage display of work from St. Louis photographer Robert Boettcher. Boettcher used to live in Hopeville, a homeless encampment along the banks of the Mississippi River, before being arrested on murder charges in 2011. After spending more than a year in jail, his case was dismissed on February 11, 2013. The city demolished the encampment in 2012.


At the time of his release, Boettcher told the RFT that he enjoys photography because it puts him in his own little world. Boettcher continues to advocate for the homeless community as a member of the Metro St. Louis Coalition for the Homeless.

“Faces Not Forgotten" runs from 1:30 to 4:30 p.m. on Sunday, February 9. To keep updated on the coffeehouse's official opening date this spring, follow its Facebook page.