There are construction projects all over St. Louis right now. It seems that the city (and the Midtown area) are in the middle of a major makeover. And with new favorite destinations arriving, we have to say goodbye to some of our old, lesser-known favorite spots.

Today is the day that the city started closing down some highway entrance and exit ramps in preparation for construction on the new MLS stadium and the new Next NGA West campus. One of the on ramps being shut down is the Pine Street ramp, which was the best on-ramp in St. Louis. (It was west enough in downtown not to be used by the throngs of sports fans after an event and it conveniently had ramps to head west or east — for when you had to make a last-minute decision to head to Pop’s or Faces or Roxy’s.)

But the thing that we’ll miss the most is the St. Louis Summit. You’ve probably never heard of it because we just gave it that name, but it’s that lovely large hill that is just north of Highway 40 and just west of 21st Street. If you’ve ever taken that meandering 20th Street exit from 40 East, it’s that hill you pass on the left after you’ve dipped around that fabulous fountain and under the highway.

It’s not that tall, but it’s still the best view from the ground in all of downtown St. Louis. When you reach the top you can see the Arch, the top of Union Station and now the big beautiful St. Louis Wheel, too. It’s due to be flattened soon and the plans for that exact area show that the hill is going to leveled for a parking lot and practice area space for the stadium. Sigh.

We trekked to the top yesterday before the exits closed (and because the temperature topped a beautiful, if concerning, 70°F) to say farewell to one of our favorite spots in St. Louis.

The best way to get there is to snake along the edge of the 20th Street exit, walking in the opposite direction of the cars.

Then you walk along the wide path along the two-lane exit and under the bridge.

There are treasures to be found, too. This clump of pictures was tangled in the grass. 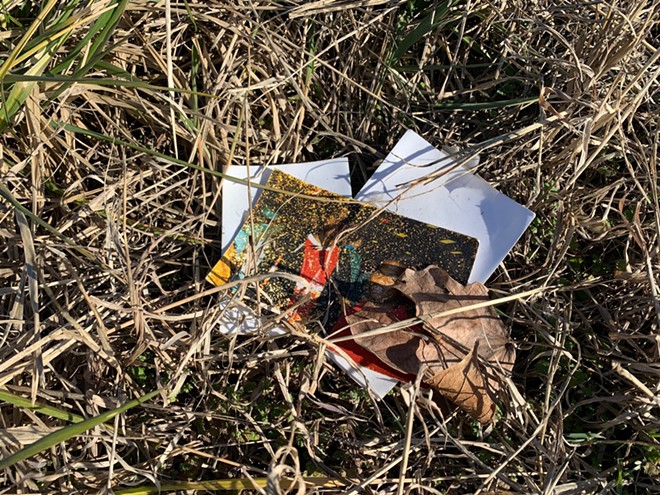 The hill narrows as you reach the peak. 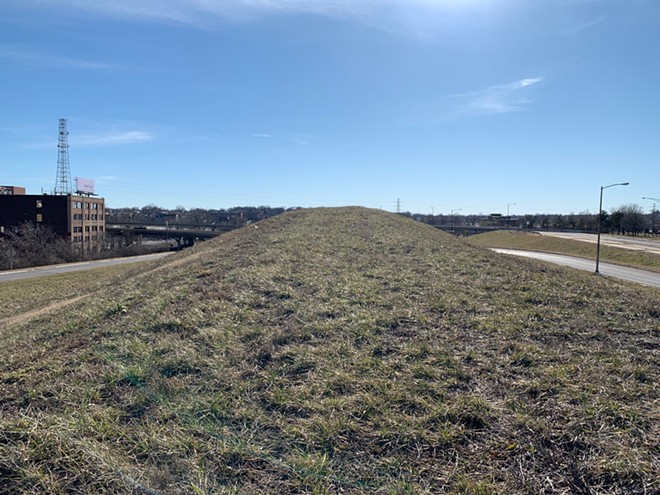 And one you're on top you can enjoy an awesome 360-degree view of all of St. Louis.

Don't forget to wave at the people on the St. Louis Wheel. They're probably looking down on you and wondering what the heck is wrong with you.

And if this view doesn't satisfy you (because maybe you need just a little more Gateway Arch in your life?) then get on the highway somehow (remember: all of your favorite on-ramps are now closed) and head across the river for the best view ever at the Malcolm W. Martin Memorial Park in East St. Louis.

And don't forget to take lots of pictures. St. Louis is changing so quickly that you'll treasure your old photos sooner rather than later.