The Best Things to Do in St. Louis, January 31 to February 4

You know, for February, this ain't gonna be a bad weekend. There are some plays, some motorcycles, a bit of roller derby and wrestling, and then a taste of Sleeping Beauty to tuck you in.

1. Live from Jersey
Jersey Boys, the musical about the rise of Frankie Valli and the Four Seasons, has won Tony, Grammy and Olivier awards. It showcases the chart-topping hits of the group and tells the true story of how four regular guys wrote and sang their own songs ("Sherry," "Oh What a Night" and about a dozen others) and conquered the music biz. And don't forget the show's content advisory, which warns that you'll hear "authentic, profane Jersey language" sprinkled between those great songs. Jersey Boys really does have it all. The musical returns to St. Louis for a long weekend at the Fox Theatre (527 North Grand Boulevard, www.fabulousfox.com). Performances are at 7:30 p.m. Thursday and Friday, 2 and 7:30 p.m. Saturday and 1 p.m. Sunday (January 30 to February 2). Tickets are $35 to $155.

2. Beats 'n' Bard
Way back in 2007, the Repertory Theatre St. Louis presented the clever and unbelievably entertaining The Bomb-itty of Errors, a hip-hop twist on Shakespeare's The Comedy of Errors. The show, conceived and written by brothers J and G Qaiyum (with several collaborators), was a smash as both hip-hop and Shakespearean theater. Now Shakespeare Festival St. Louis presents the Q Brothers' new show, Dress the Part. It's another hip-hop variation on a Shakespeare play, specifically Two Gentlemen of Verona. Two actors will play more than twenty roles, while DJ Crim Dolla Cray provides the live soundtrack. If it's anything like The Bomb-itty, it's going to be a hoot. Dress the Part is performed at 8 p.m. Wednesday through Friday and at 3 and 8 p.m. Saturday (January 29 to February 15) at the Ready Room (4195 Manchester Avenue, www.sfstl.com). Tickets are $20 to $35.

3. Suite Slumber
Tchaikovsky's score for the ballet The Sleeping Beauty was more acclaimed than his Swan Lake, and within ten years it had been performed more than 200 times at the Imperial Ballet. (This despite the ballet being almost four hours long.) Part of its success is due to its inclusion of fairy-tale characters such as Puss-in-Boots, Little Red Riding Hood and the Gray Wolf. The full run time would be too much for most children, but The Sleeping Beauty Suite is a more manageable twenty or so minutes long. With the kids in mind, the St. Louis Symphony presents The Sleeping Beauty Suite this weekend with special pricing and pre-show photo opportunities with a live princess. Guest conductor Nikolaj Szeps-Znaider leads the orchestra through Mendelssohn's "Piano Concerto No. 2" and Schumann's "Mannfred" overture before finishing with The Sleeping Beauty Suite. Performances take place at 10:30 a.m. Friday and 8 p.m. Saturday (January 31 and February 1) at Powell Hall (718 North Grand Boulevard, www.slso.org). Tickets are $15 to $68, while children's tickets are only $10 with an adult admission.

4. Bike Time
Get your motor running and head out to the Pageant (6161 Delmar Boulevard, www.cycleshowcasestl.com), because Cycle Showcase STL is back. The annual celebration of the art and technology of motorcycles features more than 50 bikes representing all the various strains of cycling. Long-range cruisers, high-speed racers, custom choppers and more will be on display from 11 a.m. to 5 p.m. Saturday and Sunday (February 1 and 2). In addition to the bikes, there will be a display of motorcycle-adjacent artwork, with artists and vendors in attendance. Even if you don't have the money to buy your own cycle, you surely have the funds for Pooches Doggie Kissing Booth; the money raised goes to Dirk's Fund, a large-breed dog rescue in Pacific, Missouri. Admission to Cycle Showcase STL is $10 for adults and free for kids ages fifteen and younger. 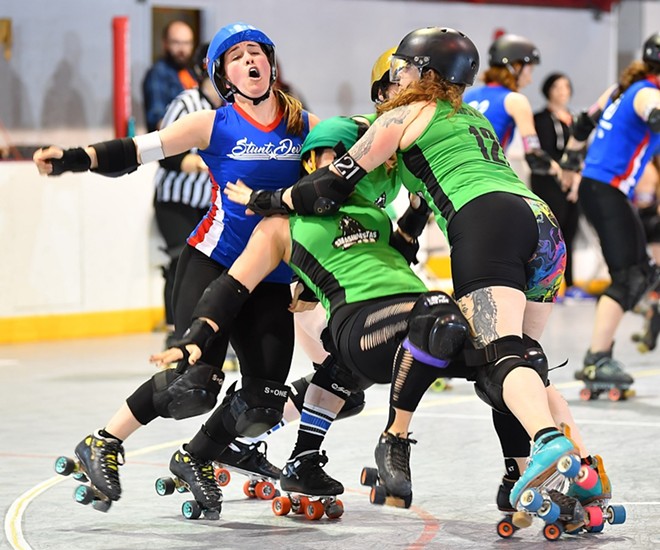 5. Roller Wrestling
Arch Rival Roller Derby and Dynamo Pro Wrestling have teamed up for an unusual sort of doubleheader: a full flat-track roller derby match, followed by a four-card wrestling match, all for one low price. In the opener, current champs the Smashinistas go against the Stunt Devils (frequent champs themselves). After the dust clears, DPW Women's Champion Rahne Victoria fights the top contender for her belt, Hayley Shadows. In the men's match, DPW Heavyweight Champ Adrian Surge and DPW D1 Champion Camaro Jackson throw down in a bragging rights bout. The action starts at 6:30 p.m. Saturday, February 1, at Midwest Sport Hockey in Queeny Park (570 Weidman Road, Ballwin; www.archrivalrollerderby.com). Tickets are $12 to $15, and kids younger than ten get in free.

6. On the Run
There are some kids who don't like reading, or maybe as award-winning author Jason Reynolds thinks, they don't like reading boring books. Reynolds — who was recently named the national ambassador for young people's literature — set out to write books these kids would enjoy with his Track series. The first book in the series is Ghost, which tells the story of Castle "Ghost" Cranshaw, a young man haunted by the memories of his violent father. Maybe this is why he's frequently in trouble and always running away from more trouble. When Coach sees how Ghost runs, he offers him a chance to join the Defenders, an elite middle school track team. All Ghost has to do is keep running and stay on the track, but that's not as easy as it sounds. Playwright Idris Goodwin adapted Reynolds' Ghost for the stage, and Metro Theater Company presents the world premiere of the play this month. Ghost debuts at 2 p.m. Sunday, February 2, at the Grandel (3610 Grandel Square, www.metroplays.org). The play continues on a staggered schedule through March 1, and tickets are $14 to $24.

7. Hurricane Watch
The St. Louis Blues are back in town for the first time since the All-Star Game to take on the Carolina Hurricanes. The Hurricanes are sitting in eighth place in the Eastern Conference at the time of this writing (the Blues are first in the Western Conference), but that doesn't mean this one's a sure thing. The Hurricanes have stayed strong despite the loss of defenseman Dougie Hamilton, and won some tough games along the way. The puck drops at 7 p.m. Tuesday, February 4, at the Enterprise Center (1401 Clark Avenue, www.stlblues.com). Tickets are $30 to $164. _n