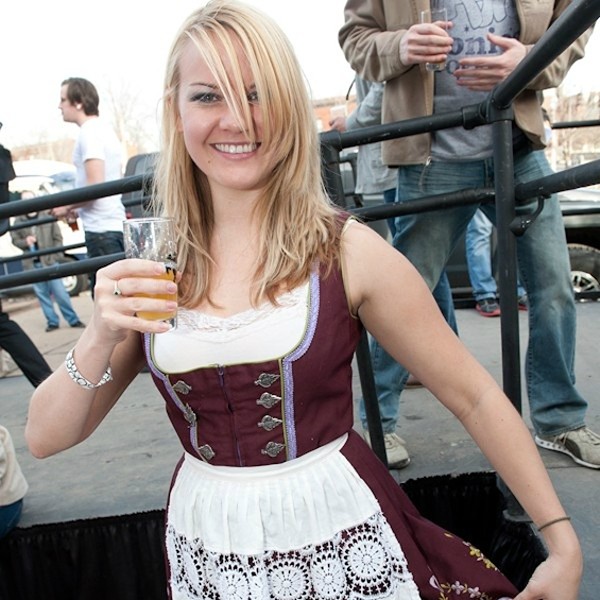 The NHL All-Star Weekend may be getting all the press at the moment, what with it taking place in St. Louis and all, but there are some interesting non-hockey options as well. Take a look and support our local arts scene — they're here all year.

1. Art as Religion
Asher Lev is enjoying a mostly comfortable youth in Brooklyn, with a few exceptions. His parents are refugees from Stalin's Russia, and they're both devout followers of the Rebbe. Asher's father wants his son to follow him into the service of the Rebbe, but Asher is more interested in art, which his father thinks is merely a distraction from more important things. His mother is caught in the middle, torn between her faith to her husband and her support for her son. As Asher grows into young manhood this family conflict only grows more tense, driving father and son further apart. The family drama My Name Is Asher Lev, adapted by Aaron Posner from Chaim Potok's novel, is presented by the New Jewish Theatre. Performances are at 7:30 p.m. Thursday, 4 and 8 p.m. Saturday and 2 p.m. Sunday (January 23 to February 9) in the Wool Studio Theatre at the Jewish Community Center (2 Millstone Campus Drive, Creve Coeur; www.newjewishtheatre.org). Tickets are $49 to $54.

2. Dance to the Music
The Big Muddy Dance Company's current season is all about celebrating the minds of musicians through kinetic movements. For the troupe's next show, Beat Ballads, they perform to the works of British composer Joby Talbot, who composed the scores for The League of Gentlemen and The Hitchhiker's Guide to the Galaxy film. Big Muddy's artistic director Brian Enos has choreographed a brand-new piece to accompany Talbot's "Hadal Zone," while Shannon Alvis' "With You Always" is once again mounted. Beat Ballads is performed at 8 p.m. Friday and Saturday (January 24 and 25) at the Grandel (3610 Grandel Square; www.thebigmuddydanceco.org). Tickets are $25 to $45.

3. Times Ten
Judy Garland, Billie Holiday and Edith Piaf all have something in common other than being mesmerizing performers. Each of them was infamous for their very public private lives. This trio and seven other female vocalists (including Maria Callas and Patsy Cline) are the subject of Joanna Murray-Smith's one-woman musical, Songs for Nobodies. Debby Lennon portrays each of the women, as well as the everyday women who experienced a memorable encounter with the famous singers. Max and Louie Productions presents Songs for Nobodies at 7:30 p.m. Thursday, 8 p.m. Friday and Saturday and 3 p.m. Sunday (January 23 to February 2) at the Kranzberg Arts Center (501 North Grand Boulevard; www.maxandlouie.com). Tickets are $25 to $45.

4. The Big Daddy
The Empire Strikes Back is chronologically the fifth film in the Star Wars saga, the second film released and the best film out of all nine. It has everything: action, romance, intrigue, betrayal, Yoda (original flavor, not that new pretender to the throne) and that fantastic score by John Williams, which crackles with emotion. The St. Louis Symphony presents a series of special performances of that score, during which the film will be projected above the orchestra. The Empire Strikes Back is screened and performed at 7 p.m. Thursday through Saturday and 2 p.m. Sunday (January 23 to 26) at Powell Hall (718 North Grand Boulevard; www.slso.org). Tickets are $42.50 to $115.50.

5. Burning Inside
David Paquet's play Wildfire has been described as "highly absurd" and a "black comedy with a humanistic worldview." It's about six people who all experienced childhood trauma and, as adults, try to deal with the consequences through games and occasional violence. Originally written and performed in Quebecois, Leanna Brodie translated Wildfire from the original Quebecois, and Upstream Theater presents the premiere English language version to start the new year. Showtimes are at 8 p.m. Thursday through Saturday (January 24 to February 9), 7 p.m. Sunday, January 26, and 2 p.m. Sunday, February 2 and 9. It takes place at the Marcelle (3310 Samuel Shepard Drive, www.upstreamtheater.org), and tickets are $25 to $35.

6. Jump to It
Urban Chestnut Brewing Co. celebrates its ninth anniversary with its always popular Wolpertinger festival. (A wolpertinger is a creature from German folklore; it's like a hare with antlers, and at Urban Chestnut, he wears lederhosen.) Wolpertinger is also a celebration of the local craft brewing scene, with more than 45 breweries offering samples at the fest. This year's guest brewery of honor is Karmeliten Brauerei from the Bavarian city of Straubing, Germany. Wolpertinger takes place from 1 to 5 p.m. Sunday, January 26, at Urban Chestnut's Grove Brewery & Bierhall (4465 Manchester Avenue; www.urbanchestnut.com). Tickets are $40 and include a commemorative tasting glass and unlimited beer samples. Designated driver tickets are $5.

7. Game On Forever
Most hockey players don't make it to the NHL or any of the minor leagues. That doesn't mean you hang up your skates after high school, though. For those who aren't ready to give it up just yet, there's always the beer leagues. These amateur leagues of friends and extended families are found all across Canada, huge chunks of America and right here in St. Louis. Adults keep practicing and keep playing games late into their twilight years, for trophies, for camaraderie and because any day with hockey is better than all the days without. Just because you outlasted your skill doesn't mean you outlasted your love for the game, after all. St. Louis-based production company Shut Out Productions presents the feature-length documentary Hockey Journey, which delves into the cult of the beer leagues. The world premiere of Hockey Journey takes place at 7 p.m. Monday, January 27, at the Skip Viragh Center for the Arts (425 South Lindbergh Boulevard; www.eventbrite.com). Tickets are $10.