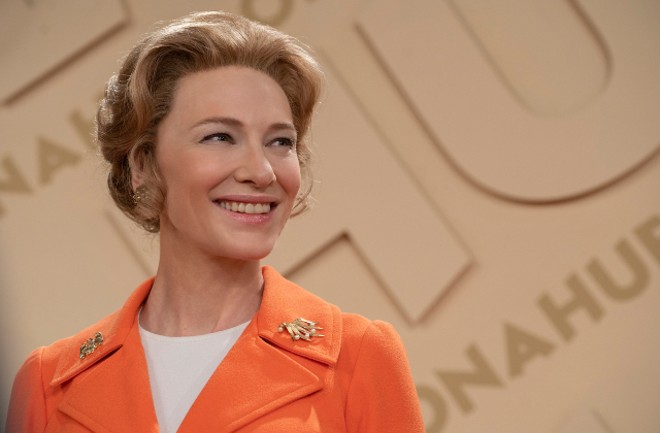 There was a time in America when the politics of St. Louis native Phyllis Schlafly were considered extreme. That time has passed — and perhaps that's why FX has developed a new limited television series adapting Schlafly's work as a proud anti-feminist political crusader.

The series, Mrs. America, will star Cate Blanchett as Schlafly and document her fight against the ratification of the Equal Rights Amendment (ERA) in the late 1970s, which, spoiler alert, she helped to successfully defeat.

The series is described by FX thusly:

Mrs. America tells the story of the movement to ratify the Equal Rights Amendment, and the unexpected backlash led by a conservative woman named Phyllis Schlafly, played by Blanchett. Through the eyes of the women of that era —  both Schlafly and second-wave feminists Gloria Steinem, Betty Friedan, Shirley Chisholm, Bella Abzug and Jill Ruckelshaus — the series explores how one of the toughest battlegrounds in the culture wars of the 70s helped give rise to the Moral Majority and forever shifted our political landscape.

First, some context for those (blissfully) ignorant to Schlafly's views and rhetoric. In 1972, she founded conservative political interest group the Eagle Forum and acted as chairwoman and CEO until her death in September 2016. The group's greatest achievement was defeating the ERA by rallying women across the country with claims that the amendment would disadvantage housewives, open up the military draft to include women and limit or eliminate alimony and custody for mothers in divorce cases.

If the trailer for Mrs. America is any indication of what we can expect in the series, it seems that Blanchett is playing Schlafly as the same earnest, power-hungry, anti-feminist persona she presented to the world.

This is a generous interpretation of Schlafly's real beliefs about working women in America in the 1970s. In the war she waged against the ERA, Schlafly was not above telling women that they should be appreciative of the "special privileges" afforded to their sex — including the ability to be entirely financially supported by their husbands in marriage (or by their ex-husbands after a divorce).

"Why should we lower ourselves to 'equal rights' when we already have the status of special privilege?" Schlafly wrote in The Phyllis Schlafly Report in February 1972. "The law now requires a husband to support his wife as best as his financial situation permits, but a wife is not required to support her husband (unless he is about to become a public charge). A husband cannot demand that his wife go to work to help pay for family expenses. He has the duty of financial support under our laws and customs. Why should we abandon these mandatory wife-support and child-support laws so that a wife would have an 'equal' obligation to take a job?"

Blanchett's Schlafly may spout that she is not against women working outside the home, but in reality, Schlafly regularly advocated that marriage and motherhood should be a women's "number-one career."

"Modern technology and opportunity have not discovered any nobler or more satisfying or more creative career for a woman than marriage and motherhood," Schlafly continues in that piece from 1972. "The wonderful advantage that American women have is that we can have all the rewards of that number-one career, and still moonlight with a second one to suit our intellectual, cultural or financial tastes or needs."

Despite her success defeating the ERA, to many Americans, Schlafly and her Eagle Forum remained fringe extremists. (Many Republicans in the 1970s supported the ERA, including then Governor of California Ronald Reagan as well as President Richard Nixon.)

In the years following her fight against the ERA, Schlafly never wavered in her views and remained proud of her work denying equal rights to women in America. She was a loud critic of gay rights (despite having a gay son) and supported former Missouri Republican Representative and state Senate candidate Todd Akin after his legitimate rape statement. She believed that “women find their greatest fulfillment at home with their family” and worked tirelessly (often on the road, away from her own children) to advocate for the preservation of what she believed were "traditional family values."

Schlafly didn't live to see Donald Trump elected as President of the United States, but she did endorse his candidacy before her death and likely would have been thrilled to see him in the White House. No president's views or administration has ever seemed so closely aligned with Schlafly's views, and Trump's presidency has proven that Schlafly's once extreme right-wing beliefs are now acceptable to even moderates in the Republican party.

That brings us back to politics in America today and FX's new series. The show's focus and timing seem significant considering the current administration's efforts to restrict equal rights and women's access to safe and affordable health care. Given our current political climate, it seems obvious to reexamine the woman sometimes called "the Mother of Conservatism" — but also "the mother of right-wing populism" — and her lasting impact on our society.

Will Mrs. America portray an honest and unflinching look at Schlafly, her politics and her legacy, warts and all? Find out when the show premieres on April 15.