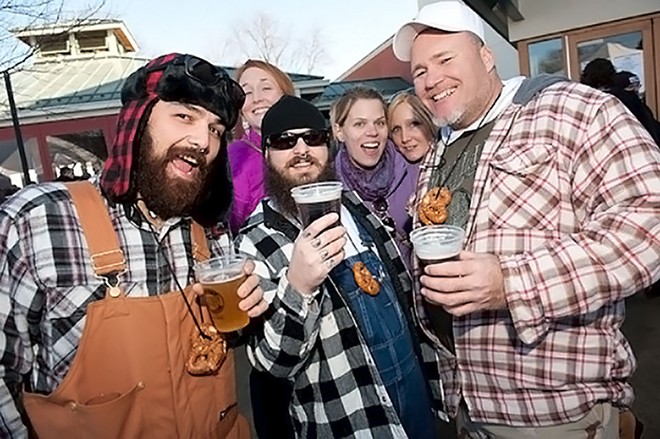 How can it possibly feel so much like February but it's still early January? 2020, you're a tough nut. At least there are a heap of good events on tap.

1. Collision Imminent
Memphis Lee's diner has seen better days, as has the neighborhood. Once the Hill District was one of Pittsburgh's most well-off black neighborhoods, but now it's quickly emptying out of people and businesses. The city wants to use eminent domain to force Lee out in order to renew this end of town, but he won't budge unless they meet the price he sets. It's the classic story of the high and mighty having their way with the little guy, but Lee is high-handed in his own right. Risa, who works for him, gets no appreciation or respect. Sterling, fresh out of jail, thinks she may be interested in an upcoming rally for racial justice, but Risa isn't buying it. August Wilson's drama Two Trains Running captures the deep divides in the civil rights movement after Malcolm X's murder, between generations, and men and women. The Black Rep presents Two Trains Running at 7 p.m. Thursday, 8 p.m. Friday and Saturday and 3 p.m. Sunday (January 10 to 26) at Washington University's Edison Theatre (6465 Forsyth Boulevard; www.theblackrep.org). James A. Williams, who originated the role of Roosevelt in Radio Golf on Broadway, returns to St. Louis to perform the part of Lee. Tickets are $45 to $50.

2. Pot, Cookies
For the seventeenth edition of its teapot biennial, the Craft Alliance Center of Art + Design (6640 Delmar Boulevard, University City; www.craftalliance.org) has added a second form. Tea and Cookies challenged ceramicists to create a paired dynamic in the form a teapot and cookie jar. Stephen Heywood linked his entry physically through a purpose-crafted base to hold both vessels. Jill Foote Hutton's laughing-being-shaped teapot holds the demonic dog cookie jar on a chain, while Joy Jones entered a set suitable for matching or mixing with a pot and jar in blue and another in green. Tea and Cookies opens with a free reception from 6 to 8 p.m. Friday, January 10. The work remains on display through February 23.

3. Lady of the House
Eliza Haycraft is one of St. Louis' unsung success stories. After arriving as a destitute young woman, Haycraft rose to own and operate one of the most successful chains of brothels in the city. She used her money to buy property and distribute aid to the poor, but she was never going to be accepted by society (this despite many of society's leading men frequently visiting her establishments). Colin Healy's new musical Madam is about Haycraft's final days, as various men attempt to snooker her out of her wealth. Fly North Theatricals presents the local premiere of Madam. Performances are at 7:30 p.m. Thursday through Saturday and 2 p.m. Sunday (January 10 to February 2) at the .Zack Theater (3224 Locust Street; www.flynorthmusic.com). Tickets are $20.

4. E-Squared
Ester and Eric are familiar with each other's work, and that familiarity has bred a small amount of contempt between them. The highly competitive performing artists both want to be stars, and the perfect vehicle for that is a solo show, which both have successfully booked. The problem is that they chose the same venue, and each reserved the same night. What happens when frenemies reach for the stars on the same stage at the same time? Ester & Eric's One Woman Show illustrates what happens when a pair of narcissists must compromise (that title implies that one of them was forced to compromise a bit more than the other). Ester Steinberg and Eric Williams (a native St. Louisan) conceived the show and perform it together at 8 p.m. Saturday, January 11, at the Jewish Community Center (2 Millstone Campus Drive, Creve Coeur; www.jccstl.com/esteranderic). Tickets are $25 to $75.

5. Get Out
If you don't mind a nip outside when there's a nip outside, Schlafly Cabin Fever is your ideal beer festival. The outdoor party features more than 30 types of beer, all of which is available for your sipping pleasure. Your $35 to $40 ticket buys you a commemorative tasting glass and unlimited samples (within reason) for four hours. Some old favorites will be available, as well as some new surprises. In addition to the smooth-drinking joy of Schlafly's Extra Special Bitter, several variations on the brewery's Scotch Ale will be available, including a Scottish Red, a Whisky-Infused Scottish Red and a Single Malt Scotch Ale. If the weather is bad, samples of any of these four will keep you toasty. Food is available for purchase, bonfires will be burning and if you'd prefer to play favorites there will be a cash bar serving pints of what's normally on tap. Cabin Fever takes place from noon to 4 p.m. Saturday, January 11, at Schlafly Bottleworks (7260 Southwest Avenue; Maplewood; www.schlafly.com).

6. Immigrant Song
The ancient Greek tragedy Medea is about a woman who abandons her homeland and family to be with the man she loves (the hero Jason, of Jason and the Argonauts fame). In many versions of the story, Medea is betrayed by Jason and takes her revenge on various relatives of her husband. Luis Alfaro has adapted the old story into Mojada: A Medea in Los Angeles, a modern drama about a Mexican family who flees home to make a new, better life in America. Mojada, her husband Jason and son Acan must deal with the precarious nature of life as an immigrant, the horror of their escape from Mexico and the constant pressures of assimilation, ambition and tradition. The Repertory Theatre St. Louis presents Mojada: A Medea in Los Angeles Tuesday through Sunday (January 10 to February 2) at the Loretto-Hilton Center (130 Edgar Road, Webster Groves; www.repstl.org). Tickets are $20 to $94.50.

7. Poor Guy
There's a persistent feeling of doom in the world for the lowly soldier Wozzeck. A poor man, he worries as much about money as he does the strange visions that plague him, which are perhaps caused by bizarre experiments practiced on him by the camp doctor. All he has in the world is Marie and their infant son, and when she's seduced by the Drum Major, he realizes his doom is closer than ever. In the build-up to World War I, doom is everywhere, however, and perhaps Wozzeck is the only one who knows what comes after. Alban Berg's opera Wozzeck is inspired by Georg Buchner's unfinished drama Woyzeck. Wozzeck deals with the callousness and heightened militarism of an increasingly war-like world, and its atonal score remains as bracing as ever. The Metropolitan Opera presents a live broadcast of the scathing Wozzeck at 11:55 a.m. Saturday, January 11, with encore screenings at 1 and 6:30 p.m. Wednesday, January 15. The AMC Esquire 7 (6706 Clayton Road, Clayton; www.fathomevents.com) hosts all three broadcasts, and tickets are $19.66 to $26.02.