It's Christmas on Wednesday (and Christmas Eve on Tuesday), but you better believe there's still stuff going on. It's never too late to start a new holiday tradition, after all...

1. In Santa’s Service
The Elf on the Shelf — a somewhat disquieting doll who sits in your house and watches your children for bad behavior during December — is the star of a new musical. The titular elf has graduated at the head of his scout class and has been assigned to his first family. They're not what he expected. The family is fractious and doesn't exhibit any of the traditional signs of Christmas spirit (caroling, cookie baking, tree trimming). Will our hero leave his post on the shelf and get them to open their hearts to Christmas? (It's a Christmas musical for kids, of course he will.) The Elf on the Shelf is performed at 7 p.m. Thursday, December 19, at the Stifel Theatre (1400 Market Street; www.stifeltheatre.com). Tickets are $25 to $65.

2. Crackin’ Up
Saint Louis Ballet's production of The Nutcracker opened on Thanksgiving weekend, and after a short break, it has returned. This annual production of Tchaikovsky's most popular ballet features the company's professional dancers as well as student dancers and special guests in surprise roles. As always, the music and dance will be bolstered by high-quality special effects and dazzling sets. Saint Louis Ballet presents The Nutcracker at 7 p.m. Thursday, 2:30 and 7 p.m. Friday, Saturday and Monday and at 2:30 p.m. Sunday (December 19 to 23). All performances are at the Touhill Performing Arts Center on the University of Missouri-St. Louis campus (1 University Drive at Natural Bridge Road; www.stlouisballet.org), and tickets are $25 to $72. 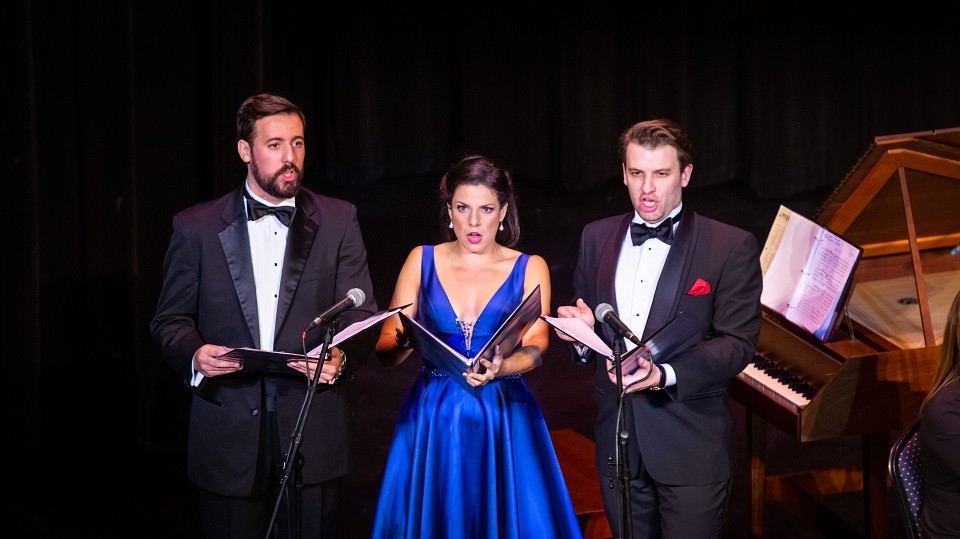 3. A Holiday Idyll
Although known more for his large-scale operas than for Christmas music, Richard Wagner was German, which means he loved the holiday. His wife, Cosima, was born on December 24 but always celebrated her birthday on Christmas; in 1870, Richard surprised her with a symphonic poem that incorporated references to their son, Siegfried, and daughter, Eva. The "Siegfried Idyll," as it became known, remains a popular piece today. Opera Edwardsville performs the family gift as part of its Wagnerian Christmas concert. Sopranos Julie Tabash-Kelsheimer and Brittney Yarbrough are joined by mezzo-soprano Penelope Cousland and tenor Chase Henry Hopkins for the performance, which also includes the Persied String Quartet and the Clarion Brass Quintet. A Wagnerian Christmas is performed at 7:30 p.m. Friday, December 20, at the Wildey Theatre (252 North Main Street, Edwardsville, Illinois; www.wildeytheatre.com). Tickets are $35 to $50.

4. Ooohh, It's Grafik
Printmaker Tom Huck tightens his inky fist on the downtown area with the opening of his screen-print studio and gallery space, Grafik House (1925 Washington Avenue; www.evilprints.com/grafih-house). The new space celebrates its grand opening on Saturday, December 21, with two exhibits. "The Feast of Lord Aporkalyptus" showcases work from A Monkey Mountain Chronicle, while the other exhibit is of work by local and national printmakers. As a commercial tie-in, Evil Prints is running a sale during the opening weekend. Prints make great gifts, after all. Admission is free.

5. The Slow Dance
There are two vital bits of information you need to understand before choosing to watch Bela Tarr's crucial film Satantango: It's in Hungarian, and it's seven and a half hours long. Don't let that dissuade you from seeing it. It's the story of an agricultural collective in post-Communism Hungary that is falling apart. The farmers expect to receive a financial windfall at the end of the day, which will give them a chance to start over. When the presumed dead Irimias returns to the village, most people fear he will swindle their windfall out of their hands. The movie's leisurely pace and long, unbroken shots immerse you in the slow-moving lives of these people who aren't sure they have anything other than the present. It's a moving, thoughtful rumination on the helplessness of the youth, the blurry machinations of time's passage and the slow death of a village, a collective and a way of life. The Webster Film Series presents Satantango at 2 p.m. Sunday, December 22, at Webster University's Moore Auditorium (470 East Lockwood Avenue; www.webster.edu/film-series). Tickets are $12, and there are two intermissions.

6. Skate Away
Ice skating and hot cocoa go together like Christmas and carols. Every year, Steinberg Skating Rink in Forest Park (www.steinbergskatingrink.com) is open from early November to late February, providing the Midwest's largest outdoor rink for the low price of $8 a day. Your $8 is good for the whole day, from 10 a.m. to 11 p.m. daily through January 4. Starting January 5, hours revert to 10 a.m. to 9 p.m. Sunday through Thursday and 10 a.m. to 11 p.m. Friday and Saturday. Skate rental is another $7, which is a steal — but just because it's so affordable doesn't mean you have to bring the family. If you're tired of the in-laws, their kids or just want to get out of the house, Steinberg is there for you. Nothing clears the head like a brisk skating session and hot cocoa by an outdoor fire.

7. One Last Gift
The gifts are opened, the dinner has been eaten and you've run out of Christmas music. It's all over for another 364 days, which is a real heartbreaker for some kids. If you want to give them one last holiday hurrah, Winter Wonderland in Tilles Park (9551 Litzsinger Road, Brentwood; www.winterwonderlandstl.com) is open from 5:30 to 9:30 p.m. on Christmas night. It's a drive-through light display, which means the kids can get in their jammies and pile in the back seat while you wind your way through thousands of lights. If you set the radio to Christmas music, they'll be full to the brim of seasonal cheer when they fall asleep. That oughta hold them until next December, or at least until Halloween. It's $10 (cash or check only) for cars to enter the park at night.