He Photographed Ferguson. Now Adrian Walker is in The National Portrait Gallery 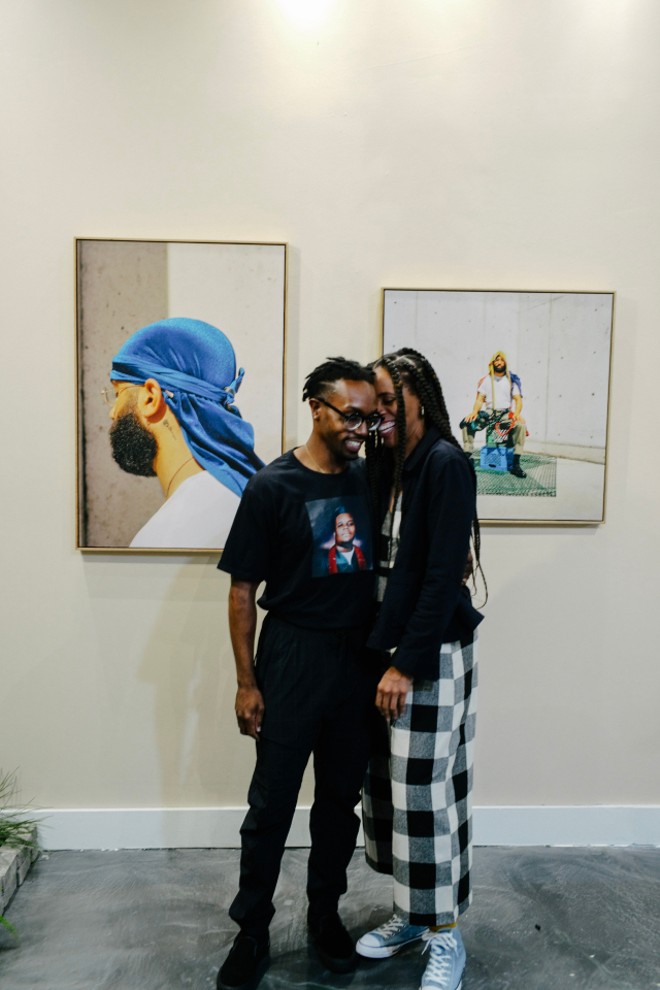 St. Louis natives Adrian Octavius Walker and Morgan Hickman Walker have celebrated many personal and professional milestones in the past few years, but the most unexpected one happened in October.

Every three years, The National Portrait Gallery names seven artists from across the U.S. as winners of the Outwin Boochever Portrait Competition. The gallery, which is part of the Smithsonian Institution, describes the competition as celebrating “excellence in the art of portraiture” and “a testament to the transformative power of one individual to make an impact.”

In 2019, Adrian was one of the seven artists in the country whose work was selected for inclusion in the Outwin Boochever. His photograph, “Black Virgin Mary,” was selected from an entry pool of more than 2,600 entries, which were then narrowed down to 47 finalists. Of those finalists, only seven artists are chosen as prize winners and commended artists; Adrian’s work was honored with a commended award. The selection process is long and layered — Adrian says he first found out that he was a finalist in October 2018 and didn’t learn that he was one of seven winners until this spring.

Winners of the competition were honored at a reception at the National Portrait Gallery in Washington, D.C. in October that was attended by the likes of Steven Spielberg and former Outwin winner Amy Sherald, the artist who created Michelle Obama’s stunning First Lady portrait for the gallery. Reflecting on the craziness of that time a few months later, Adrian describes the experience as somewhat surreal.

“From the jump there were feelings as far as being selected out of 2,600 artists,” Adrian says. “The feelings started back in 2018. For me, I’m still dealing with processing it, because I’m basically a hamster on a wheel; I feel like I always have to keep going. So even though this big thing happened, I’m still working toward the next thing, and I never know what the next thing really is.”

For the past few years, Adrian has lived in Oakland, California, with Morgan and their young daughter, Emory. The couple enjoy separate artistic and community pursuits, with Adrian focused on his photography and mixed-media art and Morgan dedicated to nonprofit work and arts advocacy and promotion for black female makers.

By day Adrian works in brand marketing for photography app VSCO, a career connection he first made while living in his hometown of St. Louis. Throughout 2014, Adrian had worked as concert photographer, even touring with rappers Stalley and Lupe Fiasco. When, on August 9, 2014, Michael Brown was fatally shot by Ferguson Police Officer Darren Wilson, however, Adrian wanted to document the fallout.

“I was sharing the uprising of Michael Brown protests, and that’s pretty much how [VSCO] found me," Adrian says. "They reached out to me and did an interview, and I guess my story resonated with folks.”

Adrian would eventually self-publish a book featuring his photos from that time titled My Lens, Our Ferguson, which was shortlisted for the Paris Photo-Aperture Foundation PhotoBook Awards. A selection of photos from the book were later featured in a solo exhibition at the University of Alabama and in five group exhibitions around the world.

Adrian was eventually hired on the curation team at VSCO’s offices in Colorado Springs before being transferred to the headquarters in Oakland. In January, he and his family will move to Chicago to open VSCO offices there. Despite his busy schedule, Adrian still dedicates a huge amount of time to his personal art.

“Black Virgin Mary,” the work selected for inclusion in this year’s Outwin Boochever, reflects both Adrian’s experiences living on the West Coast and growing up in St. Louis. The piece is from an exhibition that Walker first debuted in Columbia, Missouri, at The Greens gallery in August. The exhibit features a range of media, from portraits like “Black Virgin Mary” to installations and performance art that explores “Black American beauty traditions among Black men,” according to a release from The Greens.

The exhibition has deep roots for Adrian, yet the idea was first inspired by a series of coincidences. A friend recommended that Adrian shoot product photos for OJI Royale in Los Angeles, which makes designer and luxury durags.

“That’s what I was set to do, but I try to tell stories within all of my work in some shape or form, and it kind of came out that way,” Adrian says. “When I got the negatives back and I started really paying attention to the film, I felt that there was a story there.”

“I was looking to depict photos that erase the possibility of threat that is often assigned to black men,” Adrian continues. “We are eliminated at a crazy rate these days just due to how we look and how we present ourselves in garments such as a durag when we’re just protecting ourselves — we’re protecting our hair. These photos show that, and I wanted to show that intimacy within these black men, these harmless black men. This is just what we look like.”

The photographs featured in “We Matter” are striking and vulnerable. The images almost have an oil-painting quality to them, so rich is the detail and emotion in each portrait.

“One of the things with the ‘Black Virgin Mary’ photograph, when you look at it, it’s almost as if you’re looking into a mirror or looking into yourself,” Adrian says. “I’m glad that particular photo was chosen out of all of them to be in the Outwin; it’s strong, and definitely the strongest body of work that I have to date. It’s gotten me this far and I’m looking to create more work that tells these types of stories.”

“We Matter” ended its run at The Greens in Columbia in October, but this spring, an expanded version of the exhibit will open in Oakland at Part Two Gallery. The exhibit opens on March 14 — what Adrian calls “314 day,” nodding to his hometown. “That was not planned, but that’s when it is,” he says.

Adrian will return to Oakland for the opening, but by then, he, Morgan and Emory will be settled in Chicago. The move is a homecoming for Morgan, who split much of her childhood and young adult years between St. Louis and the Windy City. When Morgan first met Adrian, she had already earned her Bachelor of Science in Business Administration and Business Management from the University of Missouri and was pursuing her MBA in marketing at the University of Missouri-St. Louis. Adrian also attended UMSL, graduating with a sociology degree in 2010, and by 2013 was working on Made Monarchs, a blog that eventually morphed into an events company in St. Louis.

“At the time I didn’t really understand what a blog was,” Morgan says with a laugh, “but I knew that he was out in this community that I was hungry to be a part of as well. Adrian and I hit it off as friends fairly quickly and then that grew into a relationship later.”

Recalling that time now, Morgan, who had studied business and marketing and worked retail for years, says she felt pulled toward the creative community and circles that Adrian moved in.

“It was really refreshing and kind of eye-opening for me, because I had always felt like something was missing when I was away at school or just feeling like an outsider… I realized that I had a strong desire to be around more creative people and people who were creating all the time,” she says. “That was what I found interesting about Adrian. When I was in grad school, I felt like I had to do something creative so I took film and digital photography classes. I was an MBA student, but I knew I wasn’t going to make it through these business classes if I don’t be something creative.”

Adrian and Morgan bonded over their separate creative projects, but Morgan also wanted to serve her community in another way. To that end, she has worked in the nonprofit sector off and on, most recently as a program manager for Black Girls CODE in San Francisco.

In Oakland, starting over flourished into a new personal creative project for Morgan, Make·Do Market. The market’s mission statement is to connect “Black woman-owned brands with mindful consumers. Our curated vendor list and vibrant ambiance provide a one-of-a-kind shopping experience where culture meets community and collaboration.”

Dedicated to promoting the work of black women entrepreneurs, Make·Do hosts two large maker events a year and a slew of smaller pop-ups in the Bay Area. The project has given Morgan a chance to balance several of her passions, including community building and service, business and marketing and creative pursuits for both herself and her roster of artists.

“I noticed that there was kind of a lack of diversity in the entrepreneur space here, and thinking about more platforms that would focus on women of color and specifically black women who are entrepreneurs, I created Make·Do,” Morgan says. “That has kind of transformed into Make·Do Market, an event focused on black women business owners who are looking for ways to connect with consumers and new ways to connect with consumers.”

Morgan says she and Adrian are excited to be much closer to home, as well, both to see their families more often in St. Louis and connect with the arts community in Chicago. Adrian tells RFT he's excited to delve into the arts scene in Chicago and make more frequent trips back home to St. Louis. Whatever the next year holds for him and his career, he knows he’ll definitely be back in his hometown in September 2021, when works from the current Outwin Boochever winners leaves the National Portrait Gallery to tour galleries across the U.S. In a crazy twist of fate, the Mildred Lane Kemper Art Museum at Washington University will be one of three galleries in the country to host the exhibit.

For Adrian, seeing “Black Virgin Mary” in St. Louis and sharing it with people here has brought the exhibit full circle.

“Honestly it makes it feel like I did win the competition overall,” Adrian says. “It’s one of those things… I didn’t create this work at home, but it’s so close to home, and the fact that it’s coming home is such a huge honor. That whole connection with the feeling of being erased — Mike Brown happened in St. Louis, and he was an innocent black man. So to be able to bring this innocent work from Oakland, California, to our space for those who do look at us as threats, I want them to see themselves within this work and be able to resonate with it.

"Even if they don’t resonate with it, it’s important for me to tell my story and for them to see this work and where it came from. For something to live inside such tremendous place like the National Portrait Gallery and then to come and breathe inside a space in St. Louis is just truly amazing.” 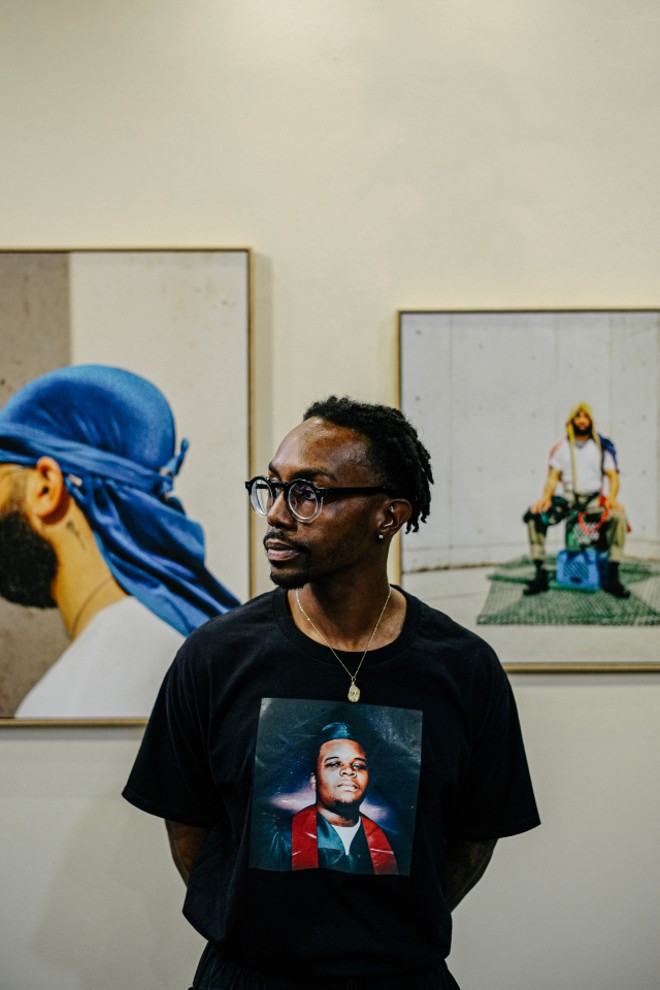