It's a real grab-bag this week, with hockey (two flavors), holidays both naughty and nice and a documentary about a legendary Los Angeles '80s concert series.

1. Relive the Office
The American version of The Office remains a pop-culture phenomenon, despite going off the air in 2013. The everyday heroes of the Dunder Mifflin Paper Company are celebrated at Scrantonicity, an Office-themed party that takes place from 8 to 11:30 p.m. Thursday, December 12, at the Ready Room (4195 Manchester Avenue; www.thereadyroom.com). There will be Office trivia, cocktails inspired by the show, a costume contest and recreations of the Dunder Mifflin Olympiad and the Dundee Awards. Tickets are $15 to $37, and a portion of the price benefits Life for Life Gym, North Side Community School and Mission: St. Louis.

2. Horrible Holiday
Krampus, the goat-demon of Central European folklore, traditionally precedes Santa Claus' arrival in order to scare naughty children into being nicer. He is the raging yang to Santa's jovial yin, and his work is never done. Once again, Krampus has journeyed to the Darkness (1525 South Eighth Street; www.scarefest.com) to create a temporary oasis of horror for adults who enjoy a scary night out. Krampus' Haunted Christmas takes place from 7 to 10 p.m. Friday and Saturday (December 13 and 14) and features evil elves, a nasty Santa Claws and an abominable snowman named Beastly (he's an actual snowman, not a cuddly yeti). Tickets for the night of frights, treats and jump scares are $25. Bring a camera — you don't often see Santa and Krampus working the same side of the street. 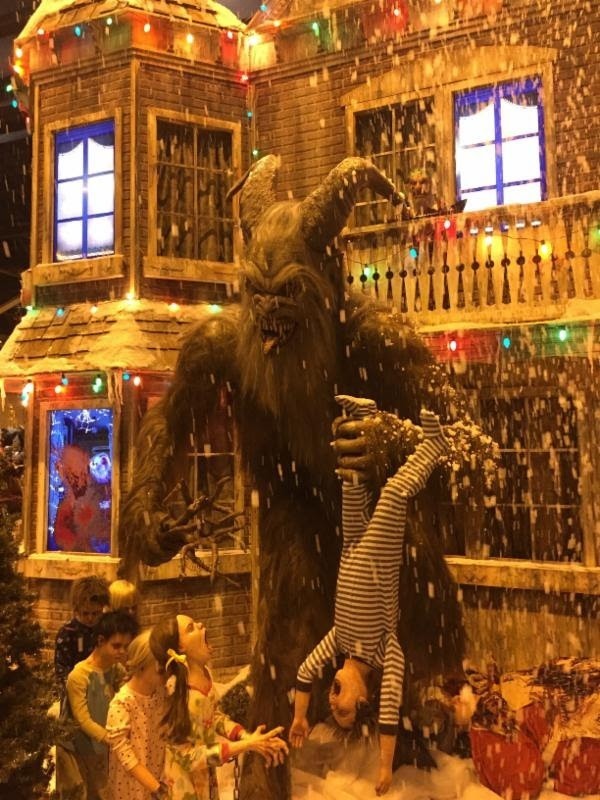 3. A Homey Holiday
The Gateway Men's Chorus annual December concert is one of St. Louis' best Christmas traditions. For Home & Hearth, the chorus performs songs inspired by the comforts and joy of being home for the holidays. There will be music, good cheer and a dash of wistfulness, as the chorus remembers the good times and the people — some of whom are no longer here — who always made the season meaningful. Home & Hearth is performed at 8 p.m. Friday and Saturday (December 13 and 14) at St. Stanislaus Kostka Church (1413 North 20th Street; www.gmcstl.org). Tickets are $20 to $25.

4. Three’s A Team
If you want to catch a few hockey games this winter but don't have the cash for the post-Stanley Cup prices, take note of the Winterfest 3-on-3 Hockey Classic. Teams of six adults (21 and older only) will play a modified version of the best sport in a five-game series. There are two twelve-minute halves to a game, and only three players are allowed on the ice at any time; crucially, there are no goalies. The opening games take place from 10 a.m. to noon on Saturday, December 14, at Kiener Plaza (500 Chestnut Street; www.nhl.com/blues/community/winterfest-hockey), and admission is free for spectators. Teams pay a $750 registration fee, and every team will receive six custom jerseys to dress skaters.

5. Hockey with the 'Hawks
Early in December, the St. Louis Blues made the trip east for a game against their hated rivals, the Chicago Blackhawks. It was a hell of a match, with the Blues treating the 'Hawks to a 4-0 defeat. (Put that on your comically fat pizzas and choke on it, Belushi boys.) At 7 p.m. on Saturday, December 14, the Blackhawks are the guests of the Blues, and here's hoping history repeats itself. The game takes place at the Enterprise Center (1401 Clark Avenue; www.stlblues.com), and tickets are $88 to $530.

6. World War I in Color
World War I was a conflict defined by new technology, from rapid-fire machine guns to tanks to airplanes, all captured on herky-jerky, black-and-white film. Director Peter Jackson used the latest film restoration processes to create his documentary about the war, They Shall Not Grow Old. He transformed the grainy, black-and-white contemporary footage into colorized 3D digital files, and then supplemented the imagery with restored archival interviews with the British soldiers who lived through the conflict. The result is startling. The men and boys who lived and fought in the trenches of Western Europe tell of the fear and camaraderie they survived, and what it was like to get home when so many didn't. They Shall Not Grow Old is shown in 3D at 7 p.m. Tuesday and 4 and 7 p.m. Wednesday (December 17 and 18) at the AMC Creve Coeur 12 (10465 Olive Boulevard, Creve Coeur; www.fathomevents.com). Tickets are $16.27.

7. Desert Fantasy
In the early 1980s, the Los Angeles punk rock scene was under siege by the LAPD. Gigs were broken up, nightsticks were swung and arrests were made. Stuart Swezey was friends with some of the musicians and had a wild idea to escape the notice of the police. What if he organized shows in unconventional venues, such as warehouses and lofts? After a couple successful shows, he had a wilder idea: What if he made cardboard tickets, sold them in record shops, and used the money raised to rent a PA, a generator and some buses and transported everyone into the Mojave Desert for a show? These open-air events became legendary in the scene, both for the bands that played (Einsturzende Neubauten, the Minutemen, Swans and Sonic Youth) and the joyful, raucous crowds that showed up. In his new documentary, Desolation Center, Swezey discusses the origin and impact of his shows and the role he inadvertently played in inspiring for-profit festivals such as Lollapalooza and Coachella. Desolation Center screens at 7 p.m. Tuesday, December 17, at Webster University's Moore Auditorium (470 East Lockwood Avenue; www.webster.edu/film-series). Tickets are $5 to $7.