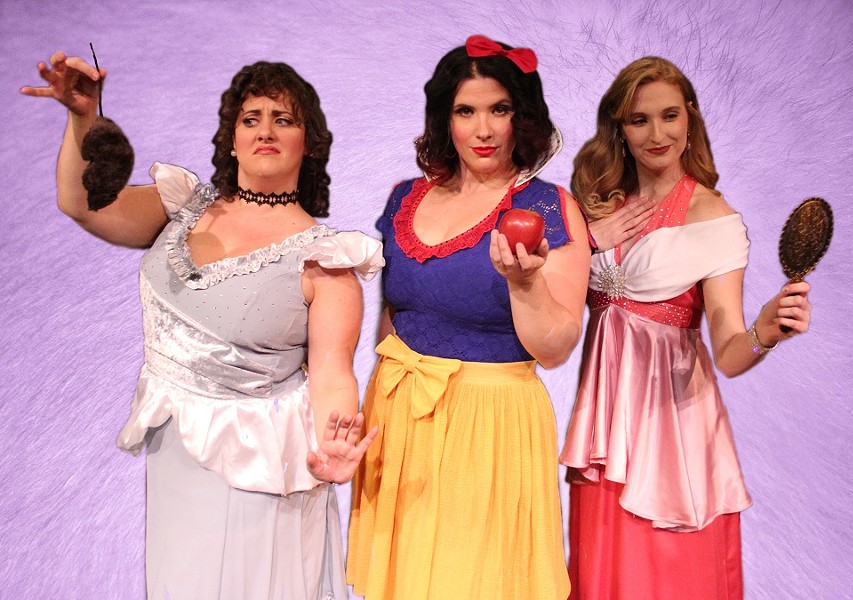 It's the last opening weekend of the year for St. Louis theaters, with five companies opening new plays this weekend. Of course, there are also quite a few holiday-adjacent events as well. Pick something and have fun this weekend.

1. Some Reservations
Sam is an actor, or he would be an actor if he could ever book a job. For now he manages reservations for one of the highest-end restaurants in the city. Becky Mode's one-man comedy Fully Committed follows a particularly rough day on the job, as Sam has to handle the restaurant's three phone lines by himself. The high and mighty try to wheedle a choice table out of him through flattery, bribery and threats while he also has to massage the head chef's feelings. It's a dirty job but somebody's got to do it — does it have to be Sam, though? New Jewish Theatre presents Fully Committed at 7:30 p.m. Thursday, 4 and 8 p.m. Saturday and 2 p.m. Sunday (December 5 to 22) in the Wool Studio Theatre at the Jewish Community Center (2 Millstone Campus Drive; www.newjewishtheatre.org). Tickets are $49 to $54.

2. Stone Cold Jane Austen
As the mother of four daughters, Mrs. Bennet is preoccupied with their individual marriage prospects. In the nineteenth century, property ownership isn't a privilege afforded to women, and so Mrs. Bennet is right to worry; if her husband should pass away before all four girls are betrothed, they'll be penniless. Three-fourths of her children seem to understand the risks, but for second-oldest daughter Elizabeth, men and marriage are a distant second to books and sharp conversation. When the eligible bachelor Mr. Darcy moves to town, the Bennet household is a-twitter with thoughts of weddings. Too bad Elizabeth takes an immediate dislike to the man, and vice versa. Jane Austen's much loved romantic novel Pride and Prejudice is streamlined and somewhat modernized in Christopher Baker's stage adaptation, but the charm and the sparks remain. The Repertory Theatre St. Louis presents Pride and Prejudice as an early gift this holiday season. Performances are Tuesday through Sunday (December 6 to 29; no shows on Christmas Eve or Christmas Day) at the Loretto-Hilton Center (130 Edgar Road; www.repstl.org). Tickets are $20 to $99.50. 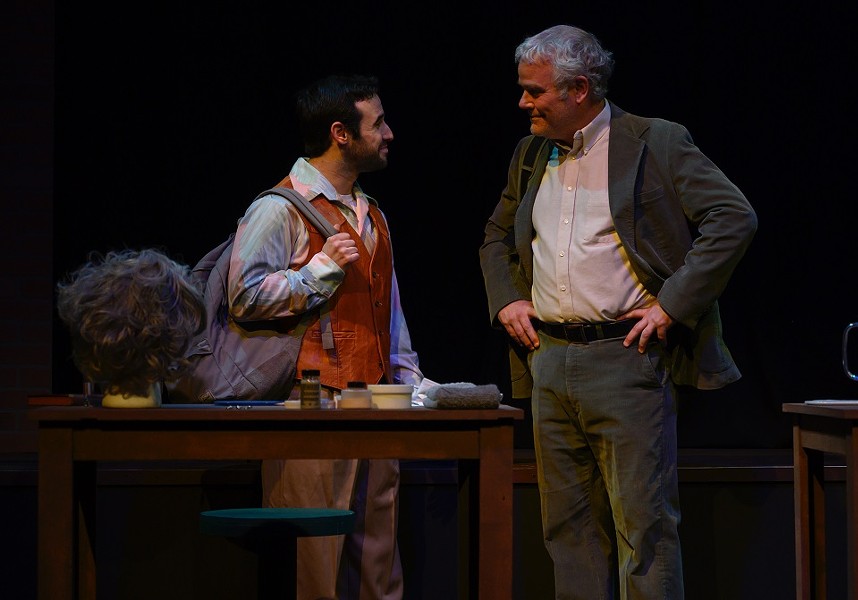 3. The Wheel of Fortune
In 2016, St. Louis Actors' Studio staged a beautiful production of David Mamet's American Buffalo. At the tail end of 2019, the company performs another Mamet drama, A Life in the Theater. STLAS founder and artistic director William Roth, who was so good in American Buffalo, will play Robert, an aging actor paired with John (Ryan Lawson-Maeske), a rising star. In a series of brief glances into their advancing careers, we see Robert's star dim while John's continues to burn brighter. Like a pair of binary stars locked in each other's orbit, John devours Robert's career, or perhaps Robert eats himself up with envy and anger. St. Louis Actors' Studio presents A Life in the Theatre at 8 p.m. Thursday through Saturday and at 3 p.m. Sunday (December 6 to 22) at the Gaslight Theater (358 North Boyle Avenue; www.stlas.org). Tickets are $30 to $35.

4. Seasonal Strut
When does Christmas season really begin? Is it November 1, November 26 or at midnight on December 24? In Maplewood, Christmas starts at 6 p.m. Friday, December 6, when Santa arrives for the Maplewood Christmas Tree Walk. The lights go on, the roaming carolers sing and the hot chocolate flows, all while you enjoy the decorated shop windows and take advantage of the specials on offer in many of those same shops. The Maplewood Christmas Tree Walk kicks off at Citizens National Bank Park (7300 Manchester Road; www.midcountychamber.org). Admission is free, but if you want to take a spin in one of the carriages that will be working the street, rides are $5 to $10.

5. The Good Kind of Bazaar
If you want to knock out your Christmas/Hanukkah/Kwanza shopping early, you should probably head to the International Institute Holiday Bazaar. This sale of handmade goods features more than 20 vendors representing countries such as Ecuador, Peru, DR Congo, Morocco, Haiti and the U.S., offering home décor, statues, art and more. Several of the participants have been aided by the International Institute's Economic Development program, which offers guidance and business training for new arrivals to America. The bazaar takes place from 10 a.m. to 5 p.m. Saturday and Sunday (December 7 and 8) in the International Institute of St. Louis' gymnasium (3401 Arsenal Street; www.iistl.org). There is an admission fee of $5.

6. Royally Screwed Over
Snow White has had enough, and she's not gonna take it anymore. No more whistling, no more happily ever afters for her; she wants to rage against so-called "women's work," the whole concept of waiting for a perfect man to save her and the commodification of women's bodies by the beauty/glamour industry. She and the rest of the fairy-tale princesses (Sleeping Beauty, Hua Mulan, Rapunzel, Belle, Ariel, Pocahontas, Badroulbadour, Cinderella and the Princess Who Kissed a Frog) fight back in Dennis Giacino's musical Disenchanted. No more fairy-tale lies and unrealistic standards here — they're going to tell the truth, rage against the machine and reclaim their lives to live as they please. Stray Dog Theatre presents Disenchanted at 8 p.m. Thursday through Saturday (December 5 to 21) at the Tower Grove Abbey (2336 Tennessee Avenue; www.straydogtheatre.org). There are two additional performances at 2 p.m. Sunday, December 15, and 8 p.m. Wednesday, December 18. Tickets are $25 to $30.

7. Home and Hearth
Life isn't easy for John and Dot Peerybingle, but it's happy. He's a middle-aged delivery man in nineteenth-century London, where poverty is only a misstep away, but the love of his young wife and their new son are more than enough. Their good friend, Caleb, and his blind daughter, Bertha, aren't so happy; Caleb works for a mean-spirited miser named Tackleton, and his only son Edward has disappeared on a voyage to South America and is presumed dead. Tackleton has decided to marry Edward's fiancée, May, which really knocks the wind out of Caleb. When an odd boarder shows up at John and Dot's, things really start to go downhill. Mysterious strangers, Christmas, names like Peerybingle? This must be the work of Charles Dickens, and it is. Dickens' Christmas novella Cricket on the Hearth has been adapted for the stage by Vladimir Zelevinsky. This new version of the story is presented by West End Players Guild at 8 p.m. Thursday through Saturday and 2 p.m. Sunday (November 6 to 15) at the Union Avenue Christmas Church (733 North Union Boulevard; www.westendplayers.org). Tickets are $20 to $25.

8. Manhattan Reverie
Return to the bombed-out wasteland of Manhattan's Lower East Side in 1981 with the long-lost film, Downtown 81. A young Jean-Michel Basquiat stars as a barely fictionalized version of himself, recently evicted and attempting to sell a painting so he can get back into his apartment. As he wanders lower Manhattan he encounters friends (John Lurie, Vincent Gallo, Fab 5 Freddy), and takes in a couple shows by James White and the Blacks and Kid Creole and the Coconuts. Arto Lindsay and the rest of the band DNA cross his path, as does Debbie Harry. Downtown 81 recaptures a moment in time, when the graffiti world, the art world and the new music scene came together in the ruins of Manhattan. The Webster Film Series presents a newly restored print of Downtown 81 at 7 p.m. Wednesday, December 11, at the Arcade Building on Webster University's Gateway Campus (812 Olive Street, www.webster.edu/film-series). Tickets are $5 to $7.