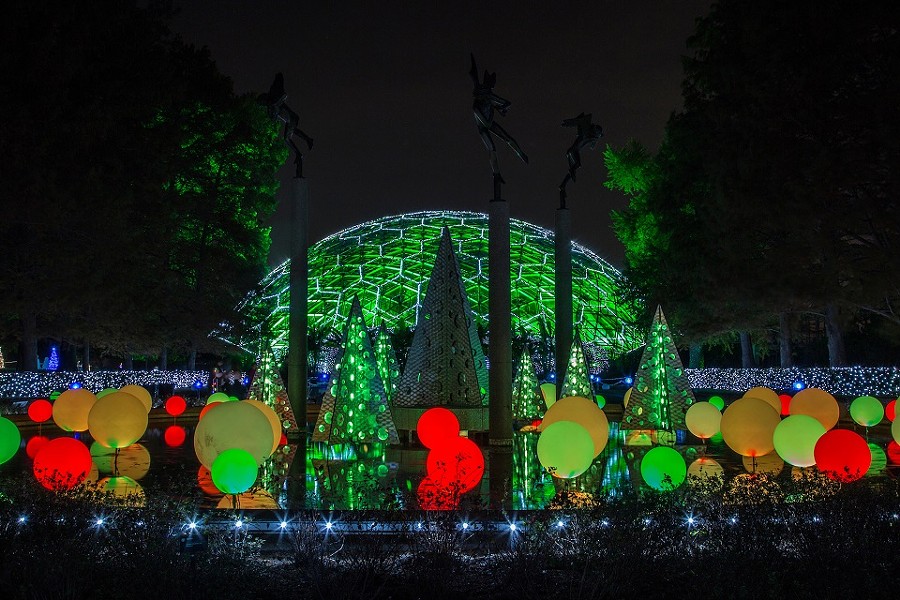 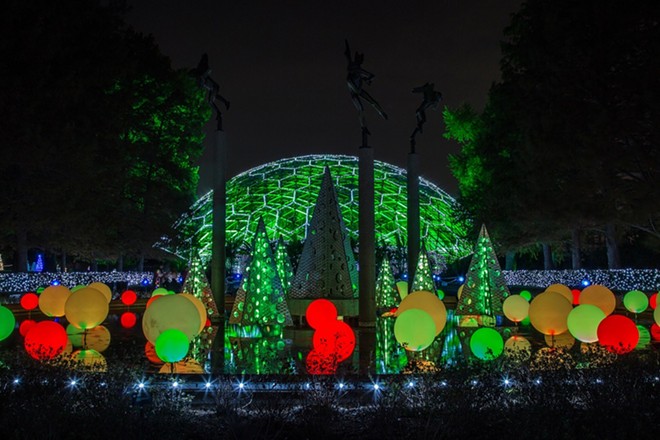 Christmas has wriggled its way into this week's events, but it hasn't saturated the list completely. There's a pair of Nutcrackers, the arrival of an outdoor skating rink, the start of the Missouri Botanical Garden's light display and a couple of surprises, but there's also a grisly teen movie and a sweeping examination of our good neighbor, the Mississippi River.


1. Fugly Duds
The rise of the ugly Christmas sweater is almost complete. Hip brands annually produce oddball sweaters to warp the idea of what ugly is — everything from Motorhead's Warpig to a sweater patterned after the carpet in the Overlook Hotel has gone on the market in recent years — and it has become fashionable to flaunt those glitzy and shitzy sweaters older relatives have long given as well-intentioned gifts. Shark Bar at Ballpark Village (601 Clark Avenue; www.stlballparkvillage.com) wants you to flaunt 'em if you got 'em at its Retro Friendsgiving Ugly Sweater party at 6 p.m. Friday, November 22. There will be drink specials, retro Christmas gift giveaways and of course an Ugly Sweater Contest with $300 in cash and prizes — wear several and keep peeling them off until you win something. Tickets are $5 to $45, and you must be 21 or older to get in.

2. Tyrannosaurus Wreck
Tammy and the T-Rex, the first film for both Paul Walker and Denise Richards, would be entirely unknown if it weren't so terrible. Instead it's remembered as a bizarre car crash of a film, thanks to its nonsensical plot. Evil scientist Dr. Wachenstein implants the brain of the murdered teen Michael (Paul Walker) into the brain of a mechanical Tyrannosaurus rex he just happens to have. Michael-Rex escapes to reunite with his girlfriend Tammy (Denise Richards), while the scientist tries to recover his project. The effects aren't great, the acting is subpar and the film looks like it was shot all in the same neighborhood because it was. Tammy and the T-Rex has recently been restored to its former glory by Vinegar Syndrome, which took pains to restore all the gory violence that had been trimmed to secure a PG-13 rating. This "gore cut" of the film is the one the Webster Film Series will screen at 9 p.m. Friday, November 22, at Webster University's Moore Auditorium (470 East Lockwood Avenue; www.webster.edu/film-series). Tickets are $5 to $7.

3. A River Runs Through Us
St. Louis is a river city, its very existence being predicated on early Americans using the Mississippi as a superhighway from the vast interior to New Orleans. Of course, European immigrants weren't the first to use the river this way — the mound-building Mississippian culture built their vast empire here for the same reason. The Mississippi River has seen civilizations rise and fall, has frozen solid and flooded and even flowed backward after the great earthquake of 1811. For many of those events people have lived alongside the great river and been shaped by it even as they have shaped it. Mighty Mississippi, the new exhibition at the Missouri History Museum (5700 Lindell Boulevard; www.mohistory.org), features more than 200 artifacts from the river, many dating back more than a millennium ago. The display comprises the largest display of Mississippian culture artifacts in more than three decades, alongside more contemporary objects such as cannons and photographs. Mighty Mississippi is open daily from Saturday, November 23, to April 18. Admission is free.

4. Rinky, Not Dinky
If you haven't heard yet, this January's NHL All-Star Game is played right here in the city of champions. There will be a week of fan-friendly events leading up to the game, and the earliest of those events is the Winterfest Ice Rink in Kiener Plaza (500 Chestnut Street; www.archpark.org/winterfest). The outdoor skating rink opens at noon Saturday, November 23, which coincides with the Ameren Festival of Lights and a fireworks finale — skate rentals are free all day. During regular hours (4 to 8 p.m. Friday, noon to 8 p.m. Saturday and Sunday through January 26), skate rentals are $6 to $12. If you have your own skates, you can skate for free. If you're planning to make a day of it, you can rent an igloo (it's really an upscale warming tent), with seats, blankets, table service from the onsite Sugarfire Winterfest Café and up to six free skate rentals. Lace 'em up and get out there.

5. Illuminated Flora
Everybody's favorite gift for moms is back on the market this weekend: Garden Glow returns to the Missouri Botanical Garden (4344 Shaw Boulevard; www.mobot.org) for another holiday season. Experience hundreds of thousands of light within the showy grandeur of nature, with occasional pit stops for snacks along the 1.3-mile trail. It makes for a lovely night out in one of the city's most lovely places, and you don't even have to wrap it. Garden Glow hours are 5 to 10 p.m. daily (November 23 to January 4, but closed December 9, Christmas Eve and Christmas Day). Tickets are $3 to $16, and include admission to the Gardenland Express train exhibit.

6. The One With All the Friends Episodes
Friends ran for eleven seasons, which means there were a lot of episodes inspired by Thanksgiving. The eight best turkey episodes are screened during the two days of Friendsgiving, at 7 p.m. Sunday and 4 and 7 p.m. Monday (November 24 and 25) at the AMC Creve Coeur 12 (10465 Olive Boulevard, Creve Coeur; www.fathomevents.com). Do you want to see that infamous football game episode, in which Ross and Monica battle it out once again for the Geller Cup (replicas of which you can actually buy on etsy.com)? Maybe you prefer the episode where Chandler tries to win over his future in-laws, Jack and Judy Geller, and Rachel makes an ill-fated old English trifle? They're both on the schedule, along with the episode with Rachel's other sister (played by Christina Applegate), and the one where that dummy Ross makes a list of Julie and Rachel's flaws to help him figure out who to date. Tickets to Friendsgiving are $13.56. 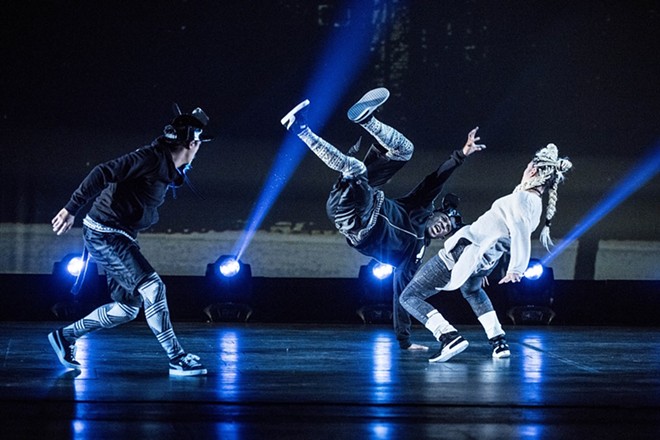 7. The Nutcracker Breaks
You're gonna see a production of The Nutcracker this year — it's impossible to avoid Tchaikovsky's Christmas classic. But if you have a say in the matter, choose The Hip Hop Nutcracker. Jennifer Weber and Mike Fitelson have recast the holiday fairy tale about a young girl dreaming of holiday adventures as a hip-hop romance set in Brooklyn. Here Maria-Clara is whisked away with her Nutcracker Prince by the magic of Drosselmeyer to a certain New Year's Eve in 1980s Brooklyn. In a nightclub on the last night of the year, her parents will meet and fall in love. The Hip Hop Nutcracker features b-boys, an electric violinist and a DJ remixing the beloved tale right before your eyes. If that's not enough, Kurtis Blow, a founding father of hip hop, is the guest MC of the tour, and will perform a short set of his classic songs before the show. The Hip Hop Nutcracker is performed at 7:30 p.m. Tuesday, November 26, at the Fox Theatre (527 North Grand Boulevard; www.fabulousfox.com). Tickets are $25 to $65.

8. Fight for the Survivors
Tonight, Budweiser's Guns 'n' Hoses once again pits city and county firefighters and police officers against each other in three-round boxing matches. There's no malice here — the combatants are fighting for a good cause, after all. Proceeds from Guns 'n' Hoses go to the St. Louis BackStoppers, the group that provides financial support to the families of police officers and firefighters who die in the line of duty. Bouts start at 6:30 p.m. Wednesday, November 27, at the Enterprise Center (1401 Clark Avenue; www.stlgunsnhoses.com). Tickets are $17 to $22, and going very quickly — the first round of tickets sold out last week, but keep an eye on the website if more become available (you can always donate directly at www.backstoppers.org).