You know Christmas is hoving into view when the first Nutcracker appears. If it's too early for holiday merriment, don't worry: we got art exhibits, dance concerts, a classic comedy and a return to Fleabag's origins.

1. Remaking the River
Dave Hullfish Bailey is an artist attuned to the environment but not as it exists currently. Through rigorous study of a pre-defined territory and the practice of speculative geography, Bailey rearranges the individual elements of an environment and then breaks up the way it's inhabited and exploited by people, effectively creating a new, temporary link between humans and their corner of the Earth. Currents 117: Dave Hullfish Bailey, his new exhibition at the Saint Louis Art Museum (1 Fine Arts Drive; www.slam.org), sees Bailey imagine a new present for the Missouri River watershed. Through both texts and redrawn maps, he creates a series of small dams near the origin of the river to imagine a present where water is more plentiful in the high plains, while two of his sculptures depict how such changes would rewrite the lives of people who live near the river. Currents 117: Dave Hullfish Bailey opens Friday, November 15, in gallery 250 at the museum. His work remains on display through March 8, and admission is free.

2.Buster Busts 'Em
The St. Louis International Film Festival is more than just a buffet of new movies — there are several classics studded throughout the program as well. Buster Keaton's incredible comedy Sherlock Jr. is one such classic. The unflappable and seemingly indestructible Keaton plays a meek film projectionist engaged to a beautiful woman (Kathryn McGuire). She's wooed away by the man they call the Sheik, a two-bit lothario who has untapped reserves of confidence and a plot to frame Keaton. Bereft of his love, the projectionist sets up another film and falls asleep on the job — and dreams he's the great detective Sherlock Holmes, who solves the crime and wins back his girl. The stunts are incredible, the scenery of early Hollywood is fascinating and the live soundtrack is performed by the Rats & People Motion Picture Orchestra. Also on the bill is the 1929 short subject "Won by a Sweet," in which candy is the fuel that powers athletes to success (a scientific truth in the 1920s). Sherlock Jr. is shown at 7:30 p.m. Friday, November 15, at Webster University's Moore Auditorium (470 East Lockwood Avenue; www.cinemastlouis.org). Tickets are $20.

3. A-Caroling We Go
The Big Muddy Dance Company is first on the boards with a holiday show (but just by days; see Wednesday), as it presents its adaptation of A Christmas Carol this weekend. The familiar elements of Charles Dickens' novella are all in place, but the story is told through contemporary dance and costumes. The miser Ebenezer Scrooge goes to bed on Christmas Eve presumably to dream of oppressing his employees and making more money but is instead visited by his long-dead business partner, Jacob Marley. Marley warns that three ghosts are coming to show him the error of his ways, and Scrooge isn't going to like what they have to show him. Big Muddy's production features choreography by artistic director Brian Enos and a live soundtrack of Tchaikovsky music arranged by Brendan Hollins. A Christmas Carol is performed at 7 p.m. Thursday and Friday (November 14 and 15) at Washington University's Edison Theatre (6445 Forsyth Boulevard; www.thebigmuddydanceco.org). Tickets are $25 to $35.

4, Agnès Explains Herself
Pioneering French filmmaker Agnès Varda has been hailed as a feminist, the mother of the French New Wave and a champion of the stories of ordinary people. Her unique style, which combines documentary techniques with narrative elements, is at work in her final film, Varda by Agnès. It is a freeform exploration of her life, her work and her loves, which include her husband Jacques Demy and cats. Varda discusses her own work, her late-in-life art installations and her commitment to making films with a staunchly female point of view, all while remaining true to her initial creative impulse. With herself as her subject, Varda told one last story about an ordinary woman and her extraordinary life. Varda by Agnès is shown at 7:30 p.m. Saturday, November 16, at Webster University's Moore Auditorium (470 East Lockwood Avenue; www.cinemastlouis.org). Tickets are $14. 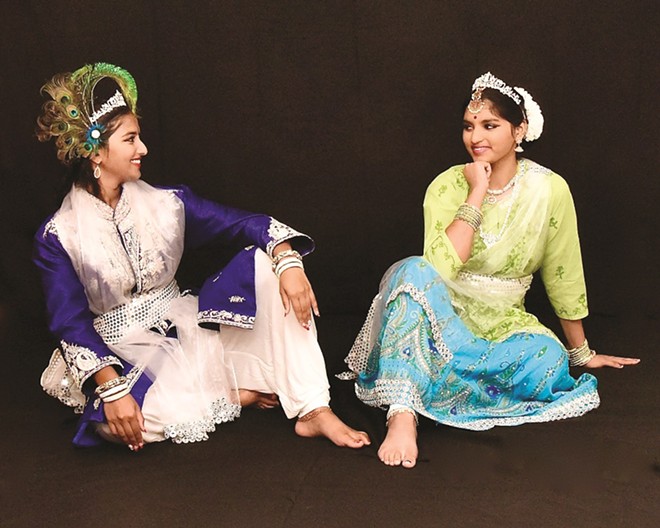 5. An Old Romance
Perhaps no element of India's cultural history has been as embraced as the story of Krishna and Radha's shared love. The song cycle tells the story of the divine Krishna's fondness for engaging in nocturnal dances with the female cowherds, especially the beautiful Radha. Known as the Song of Govinda, the poem was translated into English as early as 1792 by William Jones and has continued to draw the attention and admiration of Western poets and novelists. It is both a tale of romance and a parable about the love shared between humanity and the divine spirit. It's this story that inspires You Are My True Reflection: The Secret Letters of Radha and Krishna, the new performance by Dances of India. The narrated dance concert also includes Ashleyliane Dance Company dancing to a thillana, which is a rhythmic composition of the Carnatic musical tradition. You Are My True Reflection is performed at 7 p.m. Friday and Saturday (November 15 and 16) and 3 p.m. Sunday, November 17, at the Skip Viragh Center (425 South Lindbergh Boulevard; www.dancesofindiastlouis.org). Tickets are $15 to $20.

6. One Last Time
The award-winning TV show Fleabag is done for good, but before show creator and star Phoebe Waller-Bridge could walk away from the character, she decided to revisit the original one-woman show that birthed the series. Waller-Bridge performed the show for a limited number of New York and London audiences, and one of the productions was filmed. In it, the never-named narrator introduces you to her unfiltered, self-obsessed and always horny life, which isn't all peaches and cream. Her family is a mess, her guinea pig cafe is on its way out of business and her best friend has recently died. Fleabag is shown nationwide at 7 p.m. Monday, November 18, and you can see it locally at Marcus Ronnies 20 Cine (5320 South Lindbergh Boulevard; www.fathomevents.com). Tickets are $19.39.

7. Cracking On
Christmas is a-comin', and there's no surer sign of this than the arrival of the Moscow Ballet's touring production of The Great Russian Nutcracker. This lavish production features gorgeous Victorian costumes and a host of special effects that include an artificial owl that flaps its wings and a magnificent Christmas tree that grows right before your eyes. This Nutcracker also features characters from Russian folktales, such as Snegurochka (Snow Maiden) and Ded Moroz (Father Christmas). The Moscow Ballet performs its Great Russian Nutcracker at 7 p.m. Wednesday and Thursday (November 20 and 21) at the Fox Theatre (527 North Grand Boulevard; www.fabulousfox.com). Tickets are $32.50 to $102.50.