The Best Things to Do in St. Louis, November 1 to 9 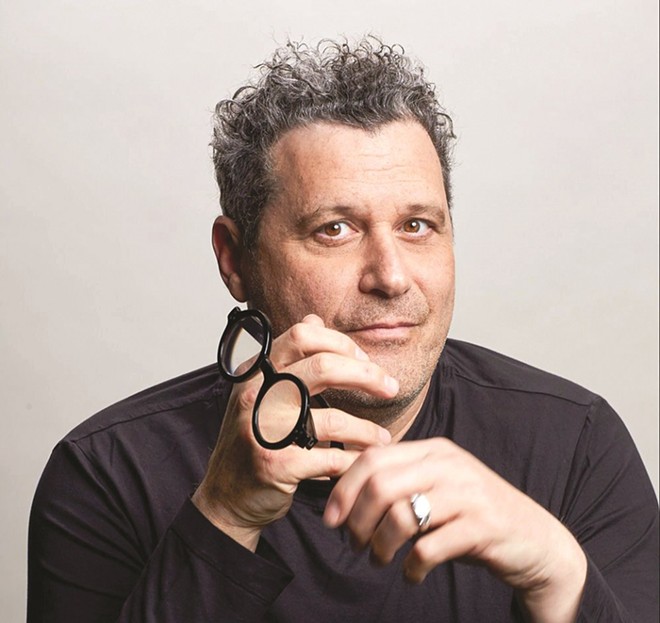 There's a nip in the air and dead leaves whipping around the streets, which is going to make for an interesting Halloween night. It's better than 89 degrees, though. November starts with new plays, new art shows and the St. Louis Jewish Book Festival. If you listen closely you can hear the Nutcrackers warming up in the wings.

1. Feelin' Blue
The title of Clarissa Tossin's 2017 video Ch'u Maya is a reference to an ancient pigment, translated as "Maya Blue." The Mayans used this waterproof pigment on their temples and pottery, both for its beauty and its long-wearing color. This same hue is used on Frank Lloyd Wright's Hollyhock House in Los Angeles, which not so coincidentally incorporates elements of Mayan architecture in its own construction. Tossin filmed choreographer and dancer Crystal Sepulveda as she performed ritual movements on and around Hollyhock House. Clad in a jaguar-print catsuit and blue sneakers, Sepulveda reclaims the house as a Mesoamerican space in a modern city. The seventeen-minute long, single-channel video shows on a loop in gallery 301 of the Saint Louis Art Museum (1 Fine Arts Drive; www.slam.org) as part of the New Media Series. Clarissa Tossin: Ch'u Maya can be seen Tuesday through Sunday (November 1 to January 19). Admission is free.

2. Bloody Injustice
Bassanio is in a wooing mood, and he's set his sights on the beauteous Portia. Unfortunately he doesn't have the money necessary to make the proper impression on the heiress, and so he attempts to borrow money from his old friend, Antonio. Noble Antonio's money is tied up in shipping, so all he can offer is to secure a loan in his own name and then give the money to Bassanio. Shylock the Jewish merchant agrees to provide the funds, but because Antonio has insulted him so many times, Shylock's terms are cruel: Forfeit, and Shylock gets a pound of Antonio's flesh. Shakespeare's The Merchant of Venice is classified as a comedy, but only because a wedding happens at the end. There is much tragedy (mostly at Shylock's expense) in this tale of love, mercy and revenge. St. Louis Shakespeare presents the thorny drama at 8 p.m. Friday and Saturday and 7:30 p.m. Sunday (November 1 to 9) at the Tower Grove Baptist Church (4257 Magnolia Avenue; www.stlshakespeare.org). Tickets are $15 to $20.

3. No-Headache Hoops
Forget about all the socio-political hoopla that surrounds the current NBA season: The Harlem Globetrotters are back in town, and the only outbursts you'll hear at their game will be of laughter. Renowned for their ball-handling skills, insane shot selection and use of both a ladder and a bucket of water, the Globetrotters will play the Washington Generals, who look to be pretty good this year and could absolutely beat the New York Knicks. The Harlem Globetrotters play at 2 and 7 p.m. Saturday, November 2, at the Enterprise Center (1401 Clark Avenue; www.enterprisecenter.com), and tickets are $24 to $104.

4. Unwelcome Visitor
June and Lurie have a problem with their new home: There seems to be something already living there. Beatrice gets cranky when she's not fed, and a cranky Beatrice is a bloody pain to deal with. The longer June and Lurie give in to Beatrice's demands, the more entwined they become. Kirsten Greenidge's gothic thriller Feeding Beatrice opens the Repertory Theatre St. Louis' studio series. The play is an immersive experience, and seating is limited. Performances take place Tuesday through Sunday (November 2 to 17) at the Loretto-Hilton Center (130 Edgar Road; www.repstl.org). Tickets are $46 to $71.

5. Loud Noises
Anthony is a musician who experiments with electronics and sound effects in his studio in the secluded sand dunes of Devon. He lives a fairly quiet life with his wife, Rachel, all things considered. Their shared silence is broken when a traveler appears. Crossley claims to have lived among the Aboriginal people of Australia, and from them learned the secrets of a shaman. One of those secrets is the ability to produce a shout so loud and horrifying that it kills all who hear it, or so he claims. Anthony can't resist the lure of this lethal sound, and so welcomes Crossley into his home. Jerzy Skolimowski's 1978 thriller The Shout features stars John Hurt, Susannah York and Alan Bates as Crossley, as well as a soundtrack by Mike Rutherford and Tony Banks of prog-rockers Genesis. The Webster Film Series emits The Shout at 7:30 p.m. Saturday, November 2, at Webster University's Moore Auditorium (470 East Lockwood Avenue; www.webster.edu/film-series). Tickets are $5 to $7.

6. Isaac on Isaac
Fashion designer and celebrity Isaac Mizrahi has come a long way from his roots as a gay young man in a Syrian Orthodox Jewish family in New York. Launching his first fashion line at age 15, Mizrahi rose to fame through his creative partnership with Chanel, released a wildly popular line through Target stores and segued into costume and set design for the stage and operas (he's twice worked with Opera Theatre of Saint Louis). Mizrahi's hallmark is his lack of a locked-in aesthetic, instead choosing to design what he likes as his moods dictate. In I.M.: A Memoir, Mizrahi tells his story and explains what drives and inspires him. The St. Louis Jewish Book Festival welcomes Mizrahi as the keynote speaker. He will participate in a Q&A at 7:30 p.m. Sunday, November 3, at the Jewish Community Center (2 Millstone Campus Drive, Creve Coeur; www.stljewishbookfestival.org). Tickets are $45, and the festival continues through November 15.

7. On Grief
Bill and Madeline are in Scotland for a memorial ceremony. Seven years have passed since their son was killed when the plane he was flying in exploded over Lockerbie, killing all aboard and eleven people on the ground. Madeline is convinced she may find a trace of her son in the Scottish hills where much of the wreckage fell, but Bill thinks she needs to lay aside her grief and move on, as he has. Deborah Brevoort's play The Women of Lockerbie is based on a real event, but filtered through the structure of a classical Greek drama. The titular women are a trio of locals who comment on the action and recount the horrors of that day when the sky exploded. The trio also explains the current crisis on the ground: The women of Lockerbie want to wash and return the clothing that was found in the wreckage, but the American government refuses to let them complete the symbolic act. Slightly Askew Theatre Ensemble present The Women of Lockerbie at 8 p.m. Wednesday through Saturday (November 6 to 23) at the Chapel (6238 Alexandria Drive; www.slightlyoff.org). Tickets are $15 to $20.