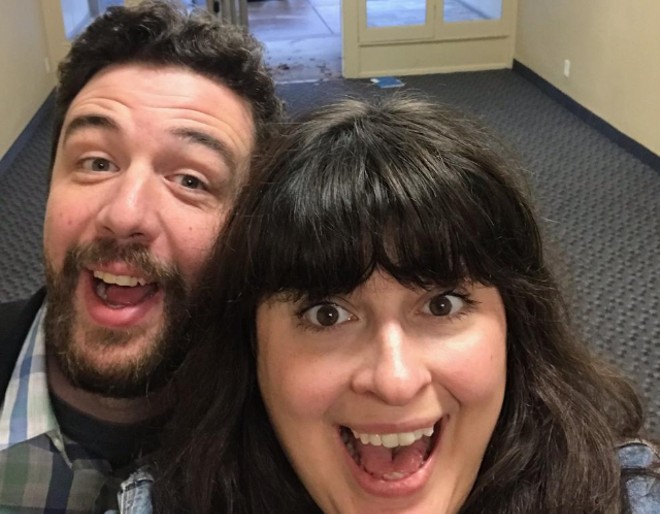 The Bevo neighborhood is already a destination for some of the city's best dive bars and Bosnian food — to say nothing of the iconic Bevo Mill — and soon, it will be home to the only microcinema in St. Louis.

In early 2020, first-time entrepreneurs Keith Watson and Sarah Baraba plan to open Arkadin Cinema & Bar at 5228 Gravois Avenue. (Full disclosure, dear reader: I have called Baraba a close friend for many years. This post was edited by interim editor in chief Doyle Murphy to ensure there was no cheering from the press box.)

Unlike large multiplexes or historic movie houses, microcinemas offer a different kind of theater-going experience. Typically, microcinemas (sometimes called arthouse theaters), are smaller, with one screen and more limited seating — Arkadin is aiming for 40 to 50 seats in the cinema — and feature non-mainstream films and programming. They usually offer a bar or lounge area for discussion and encourage a dialogue about film with patrons.

"We think of a microcinema as an intimate movie-going experience where you can really experience the film with other people and then have the opportunity to discuss and digest that film afterwards with others or the people you came with," Baraba says. "Our primary goal is going to be to get some really awesome programming in there to give St. Louisans access to movies that don’t come through the city or really even the Midwest. This is going to be an experience you can’t really get anywhere else in the city."

With a shared passion for film, Watson and Baraba were inspired to open Arkadin after researching similar concepts across the country. Both St. Louis natives, the couple lived in Washington, D.C. for almost five years before moving back home in 2018. During their time in D.C., they were frequent patrons of Suns Cinema, a microcinema that helped influence Arkadin. While developing Arkadin, the couple worked with the owners of Suns and also The Film Lab in Hamtramck, Michigan to refine their concept and learn more about the industry.

In addition to his full-time career as an attorney, Watson has been a freelance film critic for the past four years, including reviewing movies for Slant Magazine for the past few years. Earlier this year, he covered the Jeonju International Film Festival in South Korea for the publication. With Arkadin, he and Baraba hope to curate movies, film series and festivals not currently screened in St. Louis.

"The size of it creates both an intimate atmosphere and logistically allows you to show things that maybe have a more niche audience since you’re not having to fill up a big theater," Watson says. "The plan is not to do week-long runs of a movie — we’re pretty much doing one-off showings — so you can show things that are maybe targeted toward more of a niche audience. Our plan is to do a lot of series type programming; one example is a 'Filmed in St. Louis' series, showing movies that were actually filmed in St. Louis."

Having bought the building on Gravois Avenue on Tuesday, the pair are targeting a spring 2020 opening, allowing time to have the space remodeled. (Watson and Baraba both work full-time jobs, which they will continue to do after the grand opening.) Divided into two distinct spaces, the building will allow Arkadin to separate the theater from the bar area and lounge. The couple hope to use eclectic seating in the cinema, including high-top tables for elevation in the back row and possibly sofas, although nothing is set in stone yet.

"What’s great about the space is that it’s kind of a blank slate, and that’s what drew us to it," Baraba says. "You can do a lot with it; right now it’s just a big open space with endless potential."

To start, Arkadin's bar will exclusively serve canned beverages to complement classic and gourmet popcorn made in-house, plus candy and other classic movie snacks.
"We want to be able to provide local microbrews and do as many local things as we can, and fortunately we live in a city where we can do not only canned beer from across the city, but also canned cocktails and hopefully some canned Missouri wine," Baraba says. "We’re going to investigate different popcorn options in terms of seasonings and making it a little bit more gourmet and artisan than what you get at the movie theater. But then if you want classic buttered popcorn, of course we’ll have that for you; I’m a butter girl myself."

Watson adds that Arkadin may expand the bar program in the future. "I don’t know that we’re stuck on the can thing forever, but just as we’re opening, I think it’s an easy way to go about it," he says.

When Arkadin debuts next spring, Watson and Baraba plan to operate it three days a week — likely Friday, Saturday and Sunday — with one screening per day. "And then maybe add Thursdays or adding additional screenings on the weekends; whatever seems to work out best," Watson says.

Pronounced are-cod-in, the microcinema's name is an homage to Orson Welles and his film Mr. Arkadin (sometimes billed as Confidential Report).

"It’s probably one of his more obscure films — I think there’s maybe eight different versions floating out there — and there’s not really a definitive cut of it," Watson says. "It wasn’t really released in a normal way, as was the case with many of his films. It stars Orson Welles as an international powerful man of mystery who’s adopted this name that he created for himself, Arkadin. We liked the sense of mystery about it and that it also had the feel of an old movie house but with a more modern twist. We both really like Orson Welles a lot, as well, so it was a little bit of a tribute."

Located next door to the Heavy Anchor (5226 Gravois Avenue, 314-352-5226), Arkadin will be the first modern movie theater in the Bevo neighborhood and one of only a few operating in St. Louis City. Watson and Baraba say that neighbors such as Heavy Anchor owners Jodie and Josh Timbrook have already been extremely supportive, alerting them to community meetings, connecting them with the neighborhood association and inviting them to industry happy hours.

"Everybody seems really excited about it and bringing something new into the neighborhood," Baraba says. "And everyone we’ve spoken to has really had great ideas for programming, so I’m really just excited to get open and see what ideas people have and what we can give to people. There’s such an interest in film in St. Louis, and I just would love to be that venue that gives people access to these movies they want to see in a theater setting."