The Best Things to Do in St. Louis this Week, October 4 to 9 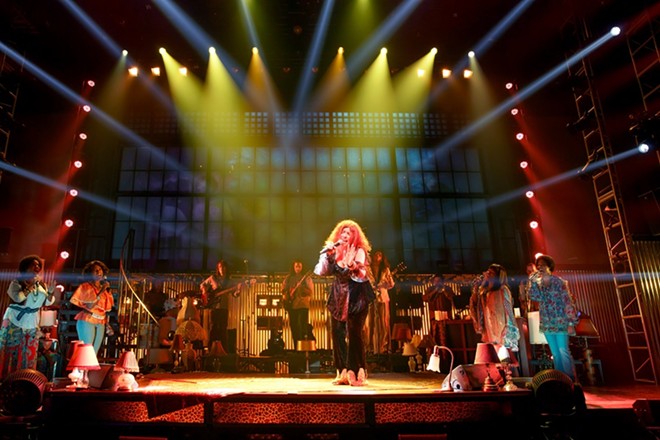 Hot on the heels of the RFT's Best of St. Louis issue, here's a shorter list of other bests. Don't fret about the quantity, though; it's the quality of these events that matter.

1. Ol' Ballet Eyes
The Saint Louis Ballet (recently selected by RFT readers as the best dance company in town) opens its new season with a performance of Twyla Tharp's Nine Sinatra Songs. The combined creative powers of two American entertainment icons shows the relationship arcs of seven couples. "Strangers in the Night," "Somethin' Stupid," "That's Life" and "My Way" are featured in the program. Also performed are George Balanchine's Concerto Barocco and More Morra by company artistic director Gen Horiuchi. Nine Sinatra Songs is presented at 7:30 p.m. Friday and Saturday and 2 p.m. Sunday (October 4 to 6) at the Touhill Performing Arts Center on the University of Missouri-St. Louis campus (1 University Boulevard; www.stlouisballet.org). Tickets are $35 to $69.

2. Statement Pieces
For the exhibition It's Not You, It's Me: A Declaration of Independence, curator and fashion designer Michael Drummond selected fiber artists who use their art to address issues of gender and identity through the media of fashion. Body-disguising fabrics, masks, gender-bending and other similar ideas are explored in the show, which opens with a free reception from 5 to 7 p.m. Friday, October 4, at the Sheldon (3648 Washington Boulevard; www.thesheldon.org). The show is presented in conjunction with the citywide show Innovations in Textiles and features work by Nina Ganci, Larry Krone and Yvonne Osei, among others. It's Not You, It's Me remains on display through November 30, and the gallery is open Tuesday through Saturday.

3. Queens! In! Space!
The Miss Gay America Pageant returns to the metro area this week to crown a new queen. The theme for this year's competition is "Beyond the Stars," which allows competitors to both interpret the science-fiction theme and imagine what drag will look like in the future. The preliminary rounds take place on Wednesday and Thursday night (October 2 and 3) at Hamburger Mary's, while finalists will compete for the tiara 'n' sash from 7 p.m. to 1 a.m. Saturday, October 5, at Gateway Classic Cars (1237 Central Park Drive, O'Fallon, Illinois; www.mgatickets.com). Tickets are $45 to $650.

4. Beyond the Wall
Wolfgang Becker's comic drama Good Bye Lenin! is set in the dying days of the Soviet Empire. Alex lives with his mother in East Berlin, and they have their differences. She's a staunch communist, while Alex is one of the protesters fighting to smash the (failing) system. When mom falls into a coma, she misses the fall of the communist regime and the Berlin Wall. When she eventually awakes from her months-long coma, Alex worries that life in reunified Germany would be too great a shock for a woman in her condition. He does the only thing he can, which is pretend nothing changed and attempt to recreate the drab, gray life she loves. The Webster Film Series shows Good Bye Lenin! at 7:30 p.m. Sunday, October 6, at Webster University's Moore Auditorium (470 East Lockwood Avenue; www.webster.edu/film-series). Tickets are $5 to $7.

5. The Pearl
Grab a seat with me and Bobby McGee as A Night with Janis Joplin hits St. Louis. Written and directed by Randy Johnson, this musical puts Janis and her musical influences back in the spotlight. Those influences include Aretha Franklin and Etta James, who show up to perform the songs that inspired Janis to sing. The musical includes hits such as "Cry Baby" and "Summertime," and of course "Piece of My Heart" is in there. Mary Bridget Davies — who was nominated for a Tony Award during the show's Broadway run – plays Janis, and the show is performed at 7:30 p.m. Tuesday and Wednesday (October 8 and 9) at the Stifel Theatre (1400 Market Street; www.stifeltheatre.com). Tickets $35 to $135.
— Caroline Groff

6. Mark's Sound World
Mark Deutsch spent several years in the 1990s in St. Louis, playing and teaching the electric bass and the double bass. His passion for the sitar and the trance music tradition seeped into his work, and he embarked on an arduous journey to create an instrument that blended east and west, bass and sitar. The result is the Bazantar, an acoustic bass with frets, a widened neck and a redesigned bridge that supports the traditional four strings with a secondary framework passing underneath that holds the tension of 35 additional sympathetic and drone strings. In Deutsch's hands, the Bazantar can sound like the music of the spheres or the song of destruction. It howls, it hums, it moans — it's a polyphony of tone and timbre, an orchestra performed by one man. Deutsch introduced the Bazantar to a wider audience at the Sheldon twenty years ago. He then decamped to the West Coast for further sonic explorations. He returns to St. Louis for a 7:30 p.m. performance Tuesday, October 8, once again at the Sheldon (3648 Washington Boulevard; www.thesheldon.org), and tickets are only $10. Don't miss it, or another twenty years may pass before you have the chance to hear Deutsch play it again.

7. Memory Banks of the Ganges
Kevin Huizenga explores the nuances of married life and everyday oddities in his new graphic novel, The River at Night. At the center of the story is married couple Glenn and Wendy Ganges, who are engaged in a distracted conversation at opposite ends of the sofa. When they go to sleep, Glenn is too awake to doze off, and begins reflecting on marriage, sleep methods and the nature of time. Huizenga reads from and signs The River at Night at 7 p.m. Wednesday, October 9, at Left Bank Books (399 North Euclid Avenue; www.left-bank.com). Admission is free, but only books purchased through Left Bank will be signed.
— Caroline Groff