The Best Things to Do in St. Louis This Week, September 26 to October 2 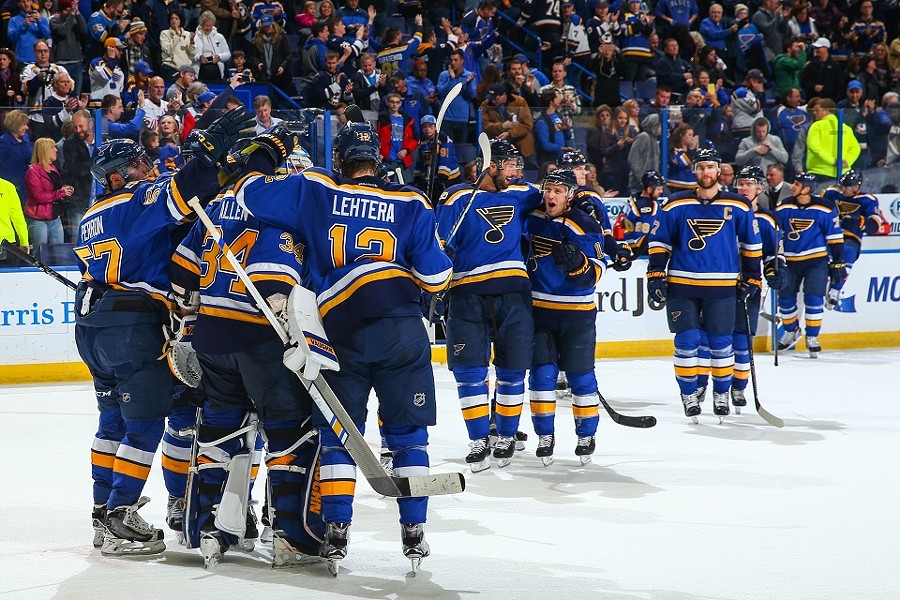 Aw, it's a crazy big week, you guys. Oktoberfest in a circus tent, an exhibition by genius-artists Ai Weiwei and the official start of another St. Louis Blues season.

1. Crying Game
Continuing its proud tradition of righting Broadway's wrongs, New Line Theatre rehabilitated John Waters' musical Cry-Baby with its 2012 production of the show. The musical was pared down by the creators expressly for New Line's inaugural regional production, throwing out the bombast and orchestrations in favor of a more intimate show with a six-piece band. These changes brought Cry-Baby back to street-level 1954, when conformity and close-harmony singing ran headfirst into the hormones and heartache heralded by the pioneers of rock & roll. Wade "Cry-Baby" Walker is the uncrowned king of the Drapes (Baltimore's greasers). When good girl Alison falls for the tender-hearted Wade, she turns her back on all that's decent. Her jilted square boyfriend Baldwin will have his revenge on all Drapes and damn the consequences. New Line Theatre opens its new season with Cry-Baby. Performances are at 8 p.m. Thursday through Saturday (September 26 to October 19) at the Marcelle Theater (3310 Samuel Shepard Drive; www.newlinetheatre.com). Tickets are $20 to $30.

2. Friendly Fight
Famous suffragist Susan B. Anthony didn't just fight for women's rights. She was an ardent abolitionist and worked to help tear down the legal framework for slavery. In both fights she was closely allied with Frederick Douglass, the man who escaped slavery and became one of the leading orators and writers of his day. Anthony and Douglass were comrades-in-arms in the fight for equality and women's suffrage, but their friendship was tested when the 15th Amendment — which gave only black men the right to vote — was proposed. Anthony felt Douglass was betraying women by supporting the amendment, while he thought any bill that linked black people and white women was bound to fail; far better to support black men now and then resume the fight for women. Mat Smart's play The Agitators showed how these two intelligent, opinionated people fought for, and sometimes against, each other in the cultural wars that still drag on. Upstream Theater opens its new season with the timely drama. Performances are at 8 p.m. Thursday through Saturday and 7 p.m. Sunday (September 27 to October 12) at the Kranzberg Arts Center (501 North Grand Boulevard; www.upstreamtheatre.org). There's an additional 2 p.m. show on Sunday, October 13. Tickets are $25 to $35.

3. Munich Comes Home
Urban Chestnut Brewing Company brings festive German charm to St. Louis with its ninth annual Oktoberfest. The beer-fueled celebration takes place at both UCBC's Midtown Brewery and Biergarten (3229 Washington Avenue; www.oktoberfeststl.com) and Circus Flora's Big Top tent (3401 Washington Avenue) Friday through Sunday (September 27 to 29). Traditional Oktoberfest eats will be available (think brats and pretzels), and there will be a selection of food-truck favorites on site. Handmade goods from local businesses and artists can be found at the Vendor Village outside of the Big Top. Most importantly, beer will be available in sixteen-ounce and one-liter pours throughout the festival grounds — buy a stein, or bring your own! Put your best arm forward for the stein-holding competition, or Masskrugstemmen, at 7:15 p.m. Saturday. The festivities run from noon to midnight on Friday and Saturday, and 11 a.m. to 7 p.m. Sunday. Sunday is also Family Day at the Big Top, with a petting zoo and Circus Flora performers. Entry is free, but you'll need cash or cards for beer and concessions.
—Caroline Groff

4. Shakespeare for the Defense
Scholars have long found links between the Catholic plot to blow up the British Parliament and newly-crowned King James and William Shakespeare's Macbeth. In the thriller Equivocation, playwright Bill Cain weaves together these connections to tell the story of William Shakespeare's desperate attempt to write a history play about that plot at King James' request. Cain's Shakespeare has a guilty conscience, as his family has various connections to the plotters. James wants the truth as James sees it, which only complicates matters. Can the playwright bend the "official" truth enough to defend his family name while also flattering the king? West End Players Guild opens its new season with Equivocation. Performances are at 8 p.m. Thursday through Saturday and 2 p.m. Sunday at the Union Avenue Christian Church (733 North Union Boulevard; www.westendplayers.org). Tickets are $20 to $25.

5. Ruptured Life
The Mildred Lane Kemper Art Museum (1 Brookings Drive; kemperartmuseum.wustl.edu) officially reopens with a bang. Chinese artist and dissident Ai Weiwei presents a major exhibition of work that spans the past twenty years of his career, some of which has never before been shown in the United States. Divided into two parts, Bare Life and Rupture, the show features monumental exhibitions such as Forever Bicycles (2019) and Through (2007-2008). The former is a commemorative arch built with Chinese-made bicycles, their carefully positioned tires lining up to create the image of telescoping lenses; the latter is an intersecting series of wooden pillars that pierce the surface of Qing Dynasty wooden tables. The work evokes China's own interrupted and intentionally erased history. Ai Weiwei: Bare Life also includes sculptures, photographs, films and a triptych constructed of LEGO bricks. The show runs from September 28 to January 5.

6. Heal Thyself
Can all your questions about self-help be answered by a combination 1960s dance party and Nietzschean philosophy? YoungLiars presents Whammy! The Seven Secrets to a Sane Self. The St. Louis theater company invites you to a show exploring the tragedy and triumph of personal growth in today's age. In the company's own words, Whammy! "probes the American fever dream where Dr. Phil, Diazepam and daily affirmations crash headlong in self-medication, suicide and The Shirelles." Originally created in 2010, the show was most recently presented at the NYC Fringe Festival in 2013. Whammy! is performed at 8 p.m. Thursday through Saturday (September 26 to October 5) at the Centene Center for the Arts (3547 Olive Street; www.facebook.com/youngliarstheatre). Tickets are $20.
—Caroline Groff

7. Overemployed & Underfed
Francis Henshall is in a pickle, which is a terrible irony because he'd kill for a pickle right about now. The always-starving musician needed a job after being dumped by his last band and ended up with two employers. The first boss, Roscoe Crabbe, is a small-time hood in town to collect payment from his future father-in-law. The other boss is Stanley Stubbers, a snooty gentleman currently hiding from the police. Francis' life is complicated not just by trying to do the bidding of two employers, but because Roscoe is really Rachel, sister of the murdered criminal. And would you believe that Rachel is in town looking for her boyfriend Stanley Stubbers, who may have something to do with Roscoe's death. Richard Bean's play One Man Two Guvnors is freely adapted from Carlo Goldini's eighteenth-century farce The Servant of Two Masters, and it made a star out of James Corden, who plays Francis. The National Theatre rebroadcasts a taped production of its winning comedy at 7 p.m. Monday, September 30, at the Landmark Tivoli Theatre (6350 Delmar Boulevard; www.landmarktheatres.com). Tickets are $15.

8. Matchmaker Takes a Spouse
Noted matchmaker Dolly Gallagher Levi is on the hunt for a wife for Horace Vandergelder of Yonkers, the half-millionaire who is infamous for his surly disposition. Horace's niece Ermengarde has already found her own husband in Ambrose, but the old man disapproves. Ambrose is an artist, which isn't a stable profession. When Dolly takes Horace to New York City to go wife-scouting, she secretly brings Ambrose and Ermengarde with her. To add to the confusion, Horace's two employees Cornelius and Barnaby also go to the city. At the rate Dolly's pulling strings, everyone in New York will be married before this trip is through. The Broadway tour of Hello, Dolly! sweeps into town this week to begin a two-week run. Performances are at 7:30 p.m. Tuesday through Friday, 2 and 7:30 p.m. Saturday and 1 p.m. Sunday (October 1 to 13) at the Fox Theatre (527 North Grand Boulevard; www.fabulousfox.com). Tickets are $35 to $105.

9. Sic Transit Gloria
At 7 p.m. Wednesday, October 2, the Blues start their defense of the Cup against the former champion Washington Capitals at the Enterprise Center (1401 Clark Avenue; www.stlblues.com). Expectations for this season are high — almost as high as ticket prices for the home opener. The few remaining cheap seats start at $269, and good seats are going for $850. If you can swing the price, it's going to be an amazing night. That first championship banner will be raised in a pregame ceremony, songs will be sung and a new season of hockey will officially start. Remember how exhilarating it was when the Blues won that first Cup — how great do you think it would feel if they do it all over again? Game on, and play "Gloria."