The Best Things to Do in St. Louis This Week, September 19 to 23

It seems like a quick turnaround (because it is), but the St. Louis Blues are back on the ice this weekend. (Preseason hockey is better than off-season.) There are also balloon races, book festivals and bacon. It's a heck of a week.

1. All Shapes
The Thelma and Bert Ollie Memorial Collection of abstract art officially went on display Tuesday, September 17, at the Saint Louis Art Museum (1 Fine Arts Drive; www.slam.org). The collection was gifted to the museum in 2017 by New Jersey-based art collector Ronald Maurice Ollie and his wife, Monique McRipley Ollie, in honor of Ronald's parents. The elder Ollies often visited the Saint Louis Art Museum with their children, instilling a lifelong passion for art. Ronald and Monique Ollie together collected art for many years, particularly work by contemporary black artists. Among the treasures in the exhibit, The Shape Of Abstraction: Selections from the Ollie Collection, are important works such as Robert Blackburn's lithograph Faux Pas, Mary Lovelace O'Neal's City Lights and Frank Bowling's Fishes, Wishes and Star Apple Blue, which demonstrates Bowling's innovative painting technique. In all, 40 works are displayed in the show, which draws its title from a poem by Quincy Troupe. The St. Louis native was inspired by the artworks in the Ollie Collection and wrote "The Shape of Abstraction; for Ron Ollie" in response. Troupe's poem is included in the exhibit catalog. 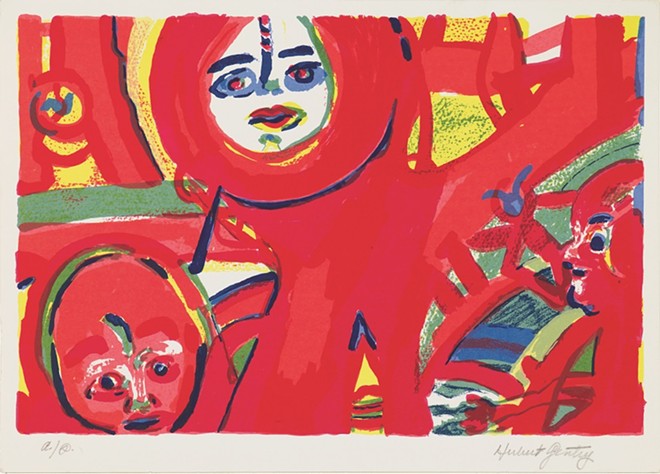 2. Alone at Last
It's been a long time since Jan and her husband, Adam, have had the place to themselves. Between their son, their jobs and the distractions of everyday life, the couple haven't spent an evening at home together — just the two of them — in years. What will they do to pass the time? Adam has an idea, but Jan isn't on board. This is one of many rifts they must cross in Michael Weller's Fifty Words. Can a long-married couple talk about anything other than their annoyances and disappointments with their respective partner, or has the marriage soured so thoroughly? St. Louis Actors' Studio opens its thirteenth season with the drama Fifty Words. Performances are at 8 p.m. Thursday through Saturday and 3 p.m. Sunday (September 20 to October 6) at the Gaslight Theater (358 North Boyle Avenue; www.stlas.org). Tickets are $30 to $35.

3. Books, Mark It
Technically, the 2019 edition of BookFest St. Louis starts at 7 p.m. Friday, September 20, with a marathon reading of Walt Whitman's "Song of Myself" at the Mahler Ballroom (4915 Washington Boulevard) to celebrate the American poet's bicentennial. To put that in literary terms, it's the equivalent of the introduction. The actual plot of BookFest kicks off at at 10:30 a.m. Saturday, September 21, and concludes at 8:30 p.m. In between are a children's storytime, presentations on young adult fiction, literature, poetry and a panel on writing for LGBTQIA teens. All of these sessions include multiple working authors, poets and authors discussing their works and books. Among the many participants are Elizabeth McCracken, Sonali Dev, John Hendrix, Aaron Coleman and Mary Engelbreit. BookFest St. Louis takes place at several locations in the Central West End, with the main tent set up near the intersection of Euclid and McPherson avenues (www.bookfeststl.com). Left Bank Books will be selling copies of everybody's books, and authors will be available to sign copies after their presentations. Best of all, admission is free, which is very easy on any book budget.

4. Skypilots Ahoy
You'd better get up early if you want to get a good spot at the Great Forest Park Balloon Race, because seemingly everyone in the metro area attends. Alright, it's actually only 150,000 people, but they're all camped out on Forest Park's (www.greatforestparkballoonrace.com) Central Field well before noon. This year's race features more than 70 balloons and pilots, who start their engines (gas burners?) at 4:45 p.m. on Saturday, September 21. In the time leading up to that magic moment you can picnic in the park, or avail yourself of one of several food trucks that will be parked nearby. The children's area opens at noon, with inflatables, games and Purina Pro Plan Performance Team's very agile dogs. Admission is free.

5. A Salty Salute
The typical brunch menu makes you choose between the two stalwarts of breakfast: bacon and sausage. You can opt to pay extra and get both (that's a pro-tip, Tex), or you can go to Bacon and Brunch Fest to load up on on the flashy choice. Salty, crispy bacon is the heart of this brunch extravaganza, which starts at 11 a.m. on Sunday, September 22, at Ballpark Village (601 Clark Avenue; www.stlballparkvillage.com). Restaurants and food trucks, including Yolklore and Super Smokers BBQ, will be slinging strips all morning, and there's even bacon in many of the cocktails. There will be non-bacon dining options as well, and proceeds go to CHAMP assistance dogs, which places service dogs with disabled people. Tickets are $10 to $250.

6. The Champs Return
The greatest sporting event of our lifetimes happened this past June, when the good and noble St. Louis Blues made Brad Marchand cry. On top of that joy, the Blues won hockey's greatest prize, a feat that can only be exceeded by winning it again. That journey of a thousand bodychecks begins with preseason hockey, and the Blues' first home game of the warmup season takes place at 2:30 p.m. Sunday, September 22, at the Enterprise Center (1401 Clark Avenue; www.stlblues.com). What's left of the Columbus Bluejackets (the team lost both its starting goalie and offensive stud Artemi Panarin, among many other skaters, in the off season) are the afternoon's opponents, but they're the sideshow, really. Fans are showing up to see the champs, and it will never get old to say that. Tickets for the game are $11 to $275.

7. Will You Be There?
Because we live in strange times, there's currently a revived interest in the 1990s. Is it the baggy, shapeless fashion that people miss? The grungy music? The comfort of knowing our horny, self-involved president was only screwing the interns and not the nation? Regardless, the '90s are back and so is Friends. Netflix's current most-watched show marks its 25th anniversary with a nationwide broadcast of its most popular and memorable episodes in movie theaters. Return to those thrilling (?) days of yesteryear as Monica Geller gets an unsought roommate, neurotic wiseacre Chandler Bing spends Thanksgiving in a wooden box and terminal asshat Ross Geller gets high, and so on and so on. Blocks of episodes are shown at 7 p.m. Monday, September 23; Saturday, September 28; and Wednesday, October 2 at select theaters including the AMC Creve Coeur 12 (10465 Olive Boulevard; www.fathomevents.com). Tickets are $13.56.