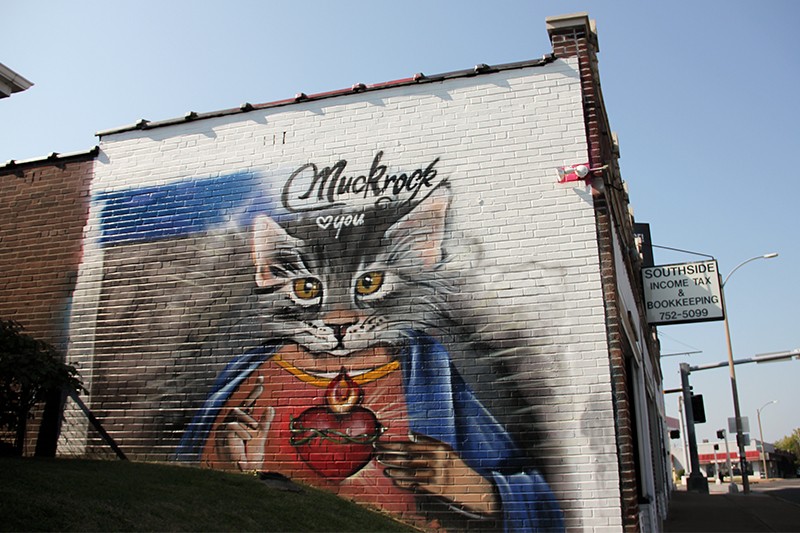 Behold, a blessed cat has risen on a corner in Bevo Mill.

The untitled mural, which combines the Catholic imagery of the "sacred heart" with the timeless imagery of a fluffy catto, was created by Venice, California-based artist Jules Muck.

The mural appears to have been created during Muck's recent jaunt through the Midwest, which took the well-known street artist through Kansas City and St. Louis on her way to Indianapolis. (Notably, once in Indianapolis, the artist completed a mural on a restaurant wall featuring Disney's Bambi and rabbit pal Thumper, replacing a previous, controversial piece that had drawn attention over its subject matter of two bunnies gettin' it on.)

In St. Louis, though, the prolific West Coast street artist didn't find any controversy when she turned a brick wall in south city into a canvas for a feline full of grace.

And yet, it's what that wall was connected to — the St. Louis Underground Gallery — that adds a squeamish epilogue to this holy kitty's perch.

We’re not in Kansas anymore! Actually we are about to be in Indiana so HMU. #wizardofoz thanks @stuck_in_da_90s for the dope #kcmo hookup!! #theresnoplacelikehome but we are down to roam!

According to its Facebook page's 'about' section, the St. Louis Underground Gallery was founded in 2014 by "old school graffiti artists" who'd made it their mission to "help cultivate the graffiti culture in the city in a more legal and positive direction." In a July 22 Facebook post, the gallery announced Muck's planned visit to St. Louis and asked its followers "If anyone has a [5 story] building or something" and wanted to pay Muck to paint it.

Apparently, the call for five-story buildings fizzled, so Muck took to adorning the gallery, which sits in a multi-business structure near the corner of Gravois Avenue and Bates Street.

Muck herself posted a photo of the finished piece on July 29.


By then, however, the news of the gallery owner's arrest — for alleged sexual assault, among other things — had broken all over local media.

According to court records, Andrew Mitts was arrested on July 26 and charged with two felonies for sodomy and failure to register as a sex offender. Along with the felonies, the St. Louis City Circuit Attorney charged Mitts with five counts of misdemeanor sexual abuse and alleged that he'd sexually assaulted two women during massages at his other business, the Dire Wolf Recovery and Spiritual Center, which was located next door to the gallery.

On a visit to view the mural earlier today, the storefronts of both the Underground Gallery and Dire Wolf center appeared to have been thoroughly cleansed of the previous tenants. (Property records show a different owner of the actual building.) All signage for the Underground Gallery had been removed, as well as the various art items previously on display in the front windows. A "For Rent" sign hangs in the window. (A voice-mail left for the number was not immediately returned.)

All that's left is the mural. 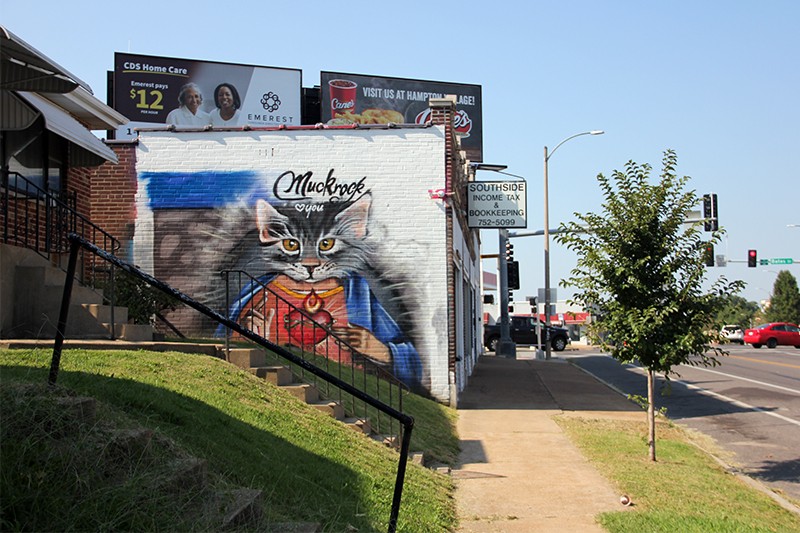