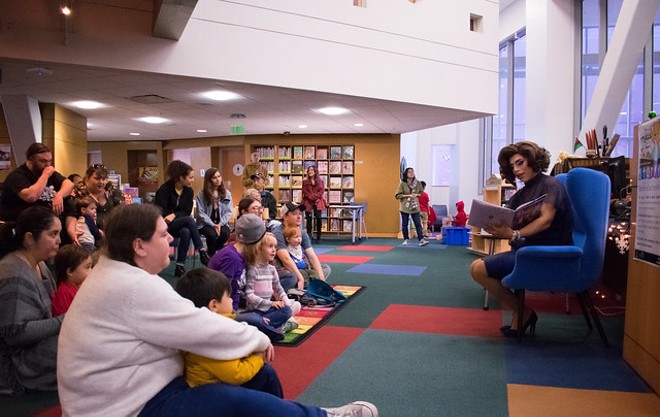 Some of the most popular events at libraries in recent years have been drag queen story hours. At these events, drag queens show up to read to kids. In addition to providing a highly useful service for their brain development, being around these performers teaches kids about inclusiveness, tolerance, acceptance and love.

Not only do they learn from the books at these events, they learn that the person in the gown is, indeed, a person — and one that they probably like on top of it all. Because of this, these community events have become common in libraries across the globe. Earlier this year, the New York Times ran a great story about the history and popularity of these events.

But now that drag queen story hour is picking up fans in St. Louis, it is also attracting detractors. A drag library event is scheduled for later this month at the Schlafly Branch of the St. Louis Public Library (225 N. Euclid Avenue, 314-367-4120) and some people are freaking out about it.

In a Facebook event post titled “Protest Against Schlafly Library's Drag Queen Storytime”, organizers are asking protesters to “Come in your most patriotic gear and help us hand out brochures with information about children with gender dysphoria.”

The description of the event continues with questions like “What could be more important to do on a Saturday afternoon than fight for our children while connecting with other like-minded people?” and includes a bit about how “the guest list for this event will not be displayed, so you are at no risk of anyone finding out that you are interested in/attending the protest.”

These snowflakes are so offended by others’ identities that they’ve organized an entire protest at a library where kids go to learn and expand their minds. And while Missouri might be a red state, St. Louis is fiercely blue and locals are not tolerating these people coming for their beloved queens. Organizers are getting… dragged in the comments. Enjoy.

“You do know there is a difference between being a drag queen and identifying as transgender, right? Or did they not cover that on the propaganda website you've referenced?”

“Do you live in the city? Just let us live. Go back to the burbs with your close minded bullshit. No one likes you.”

“Have you considered collectively lobotomizing each other so no one participating in this so there's no chance of those people getting any more dumbass ideas?”

“Gotta love it when you try to organize a protest about something you thought was so inappropriate, but most of the people on the event page and in person only showed up to tell you how you're just brainwashed and wrong.”

“Drag queens are doing more for society and literacy than you are. Maybe you could learn something from them.”