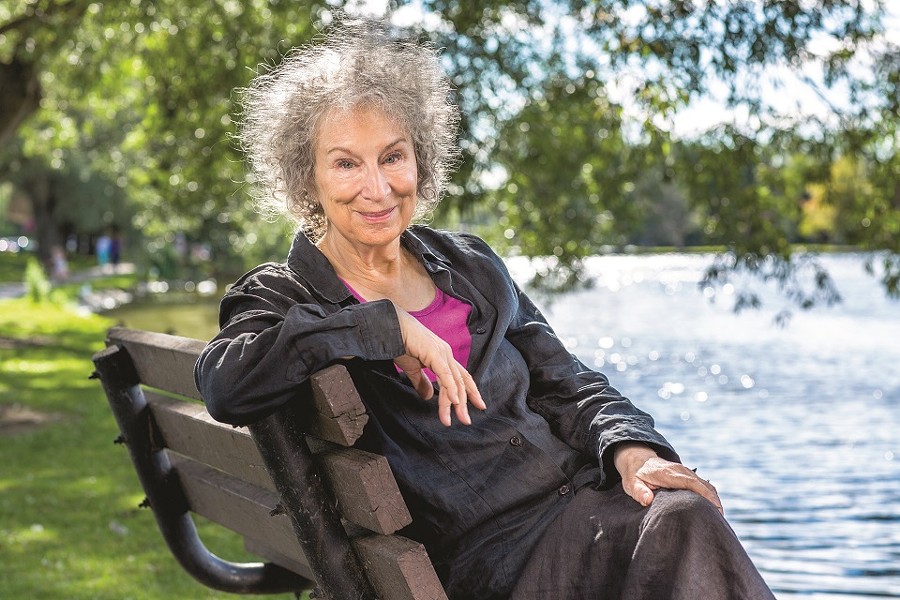 (C) LIAM SHARP Margaret Atwood goes to the movies to talk about her new novel, The Testaments. 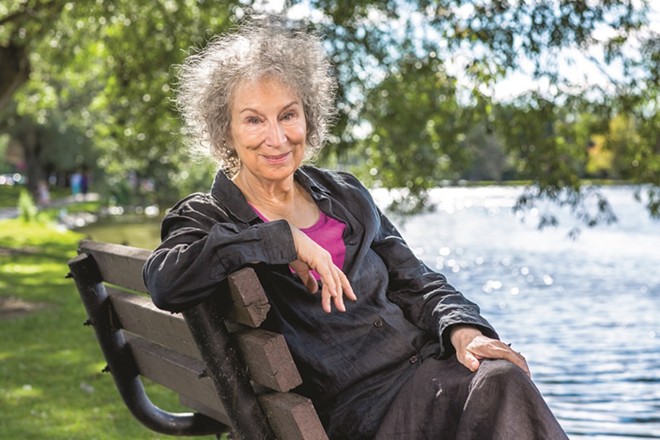 There are only eleven days 'til the Stanley Cup Champion St. Louis Blues play hockey once again. Granted, it's pre-season hockey, but it's better than nothing. While we wait we can get started on Margaret Atwood's new novel set in Gilead, there are new art shows and plays opening, and real professional soccer in St. Louis.

1. Going Rogue
Artist Stephanie Syjuco was born in Manila and immigrated to the United States with her family when she was three years old, which gave her an American education and an immigrant's eye for our national blindspots. It's these blindspots that inform the art in her exhibition Stephanie Syjuco: Rogue States, which opens with a free reception at 7 p.m. Friday, September 6, at the Contemporary Art Museum St. Louis (3750 Washington Boulevard; www.camstl.org). The title of the show comes from her installation of 22 flags that were used to represent the flags of made-up nations in various American films. Also in the exhibit is her large-scale installation Neutral Calibration Studies (Ornament + Crime), which comprises artifacts representing both colonizer and colonized societies. Cultural objects such as wicker chairs and traditional rugs Syjuco purchased online, cardboard cutouts of people and actual artifacts are mixed together in a larger-than-life diorama. Nestled in the background is a color photograph of the "stone-age" tribe of the Tasaday, found on a remote island in the Philippines in the early 1970s, who were actually modern people posed by a photographer. Rogue States continues through December 29, and the museum is open Wednesday through Sunday.

2. Coping Mechanisms
Composer Micki Grant and director Vinnette Carroll made history with their 1971 musical Don't Bother Me, I Can't Cope. The revue was the first Broadway show written and directed by black women. The show's songs are interspersed with a little bit of dialogue, the topics ranging from the inalienable right of black people to exist ("My Name Is Man") to the list of white annoyances (bad bosses, nasty clerks at the unemployment office) that populate the title track. Don't Bother Me has been praised as a combination of "block party and revival," and while the 1970s may be long gone, most of the issues remain relevant. The Black Rep opens its 43rd season with the high-energy musical. Performances are at 7 p.m. Thursday, 8 p.m. Friday and Saturday and 3 p.m. Sunday (September 4 to 22) at Washington University's Edison Theatre (6445 Forsyth Boulevard; www.theblackrep.org). Tickets are $15 to $50. 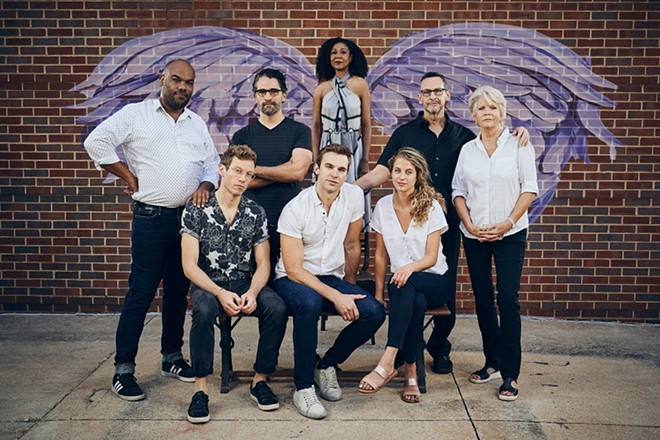 3. Lo, Two Angel Approaches
Time moves incredibly quickly. This past April, Repertory Theatre St. Louis artistic director Steven Woolf stepped down after helming the past 33 seasons. This September, incoming artistic director Hana S. Sharif embarks on her first season with the Rep. Sharif's season-opening show is definitely a statement piece: Tony Kushner's Angels in America: Parts One and Two. The Pulitzer and Tony award-winning drama tells the simultaneous stories of the early days of the AIDS crisis, a young gay couple haunted by the new plague, a young Mormon couple whose marriage is on shaky ground and the last days of hard-bitten lawyer Roy Cohn. Addiction, cowardice, lust for power and the fear of being true to yourself all factor into the groundbreaking drama. The Repertory Theatre St. Louis presents Angels in America: Parts One and Two in repertory (and on select days, back to back) Tuesday through Sunday (September 4 to October 6) at the Loretto-Hilton Center of the Performing Arts (130 Edgar Road; www.repstl.com). Tickets are $20 to $97.50.

4. The Origin of Love
Stephen Trask and John Cameron Mitchell's film adaptation of their musical Hedwig and the Angry Inch was a flop when it was released in 2001. America just wasn't ready for the story of Hedwig, a genderqueer performer from East Germany who was stranded in Kansas after a failed marriage. The DVD release of the film became a cult classic, however, thanks to Trask's sublime songs and Mitchell's incredible performance as Hedwig. In the film, Hedwig's faith in the transformative power of rock & roll keeps them afloat in the fields of Kansas. That faith also helps lift fellow outcast Tommy into a wider world, and together Tommy and Hedwig are gonna knock rock on its ass. But Tommy runs off with all of Hedwig's beautiful songs and becomes a huge star on his own. Once again Hedwig is stranded, trailing Tommy's very successful tour with the much less successful band, the Angry Inch, playing crappy seafood places to Tommy's arenas. The Reel Late film series presents Hedwig and the Angry Inch at 11:55 p.m. Friday and Saturday (September 6 and 7) at the Landmark Tivoli Theatre (6350 Delmar Boulevard; www.landmarktheatres.com). Tickets are $8.

5. Dreaming Freedom
In the musical Man of La Mancha, nothing is quite what it seems. Miguel de Cervantes, a man who has failed at several careers, ends up in prison courtesy of the Spanish Inquisition. The other prisoners want to rifle through his belongings, but the leading prisoner suggests a trial instead, with the old man relinquishing his goods if he's found guilty. Cervantes' defense takes the form of a play within the play, in which he becomes a sixteenth-century nobleman who has gone mad and thinks he's Don Quixote, knight errant. The prisoners become actors within the play, all joining to tell a story that implies following one's dreams leads to happiness and true freedom, but the dream of all prisoners is to regain their freedom, isn't it? Worlds within worlds, actors in several plays at once — it's a trick mirror of a show. Stages St. Louis closes its season with Mitch Leigh, Joe Darion and Dale Wasserman's extended parable about the power of dreams and the horrors of reality. Man of La Mancha is performed Tuesday through Sunday (September 6 to October 6) at the Robert G. Reim Theatre (111 South Geyer Road, Kirkwood; www.stagesstlouis.org). Tickets are $25 to $65.

6. Mother of the Handmaid
If you can believe it, Margaret Atwood's 1985 novel The Handmaid's Tale was considered science fiction, thanks to its near-future, dystopian setting. Thirty-four years of perversely regressive American politics have made it more of a roadmap to our current nightmare than anyone (except Atwood) could have imagined. The Canadian author's long-awaited sequel, The Testaments, is being published this year, and to mark the occasion, Atwood appears in nationwide simulcast, Margaret Atwood: Live in Cinemas. Author and BBC broadcaster Samira Ahmed will interview Atwood about her career and work, and why she chose now to return to Offred and the land of Gilead, while several special guests will read from The Testaments. The interview can be seen locally at 7 p.m. Tuesday, September 10, at Marcus Ronnies Cine (5320 South Lindbergh Boulevard), Marcus Des Peres 14 Cine (12701 Manchester Road, Des Peres) and the AMC Chesterfield 14 (3000 Chesterfield Mall, Chesterfield). For more information, visit www.fathomevents.com. Tickets are $16.16.

7. Alive and Kicking
Major League Soccer returns to St. Louis in 2022, but if you can't wait that long for hot soccer action, the U.S. Men's National Team visits town at 7 p.m. Tuesday, September 10, for an international friendly with the Uruguayan National Team. This is the final tune-up for the Americans before the CONCACAF Nations League, an international tournament that won't see its championship until June 2020. While this particular match doesn't come with any real stakes, it is scheduled to feature St. Louis native Josh Sargent in his first game with the national team. Also on the roster is Christian Pulisic, perhaps the most dynamic and inventive player of his generation. The U.S. and Uruguayan teams play at Busch Stadium (601 Clark Avenue; www.ussoccer.com), and tickets are $35 to $150.