Check this out: The predicted high temperature this Saturday and Sunday is 81 degrees. That's perfect festival weather. Good thing one of St. Louis' most popular outdoor fests takes place this weekend. Read on for details...


1. Ninja Massacre
Ninja Scroll, the wild and wooly all-action anime that hit American screens in 1995, helped popularize the format for adults. The keys to its success are its twisty-turny plot, the vehemence of its violence and the brief interludes of a sexual nature. At the center of the story is wandering ninja Jubei Kibagami, a lone swordsman who becomes entangled in the hunt for a lost (or stolen) shipment of gold that could tip the balance of government power. Trying to keep the gold are the Eight Devils of Kimon, a team of ninjas with supernatural powers and a mean streak a mile wide. Jubei must fight his way through all eight of them to carry out his mission, but that's easier said than done. The Reel Late film series presents Ninja Scroll at 11:55 p.m. Friday and Saturday (August 23 and 24) at the Landmark Tivoli Theatre (6350 Delmar Boulevard; www.landmarktheatres.com). Tickets are $8.

2. The Nightmare Never Ends
Late Nite Grindhouse is back from its unfortunate hiatus with a new and hopefully long-term home theater, and to celebrate it's going twice as long with the Slumber Party Massacre double feature. Slumber Party Massacre was originally written by Rita Mae Brown as a feminist takedown of slasher films, but was reworked during production as an essentially straightforward blood 'n' screams teen film. Still, it retains something of its original humor as well as a few unintentional laughs. Both it and its sequel, Slumber Party Massacre 2, are written and directed by women, which is an interesting wrinkle for the genre. The films are shown back-to-back starting at 10 p.m. Friday and Saturday (August 23 and 24) at the Marcus Des Peres 14 Cine (12701 Manchester Road, Des Peres; www.marcustheatres.com). Tickets for the two-fer are $13.12.

3. Stranger Plays
We're getting late in the baseball season, but the Cardinals promotions team is still firing on all cylinders. For this next series against the flailing Colorado Rockies, the promotions are stacking up two and three to a game. The Friday, August 23, game stretches to make a connection between baseball and Netflix's popular Stranger Things TV show. (It's a big stretch; those kids are all fans of inside activities, clearly.) The link? The Cards have eleven Worlds Series titles — and hey, one of the kids on the show is named Eleven. Fans who love both the goings-on in Hawkins and Busch Stadium (601 Clark Avenue; www.stlcardinals.com) can opt for a ticket that comes with a special Cardinals-themed Stranger Things T-shirt (it shows a backflipping Ozzie Smith in the Upside Down), with a That 80s Band concert before the game.

4. Mr. Natural
Sam Falls' artworks are inspired by, and at least in part created by, nature. For his exhibition at Laumeier Sculpture Park, Falls laid a canvas covered with dry pigments on ground in the park's woodland. Left there for several days, the dew, whatever rain fell and the sunlight that passed through the leaves overhead and onto the canvas made a record of the local flora. In addition to his large-scale nature paintings, Falls has also mosaicked a pair of steel I-beams with tiles featuring native plants grown especially by Laumeier's master gardener at Falls' request. The finished beams are placed standing upright in the forest, reflecting and refracting the natural landscape that surrounds them. Sam Falls: Conception opens with a free public reception from 11 a.m. to 1 p.m. on Saturday, August 24, at the Aronson Fine Arts Center in Laumeier Sculpture Park (12580 Rott Road, Sunset Hills; www.laumeier.org). Falls' work remains on display through December 22. 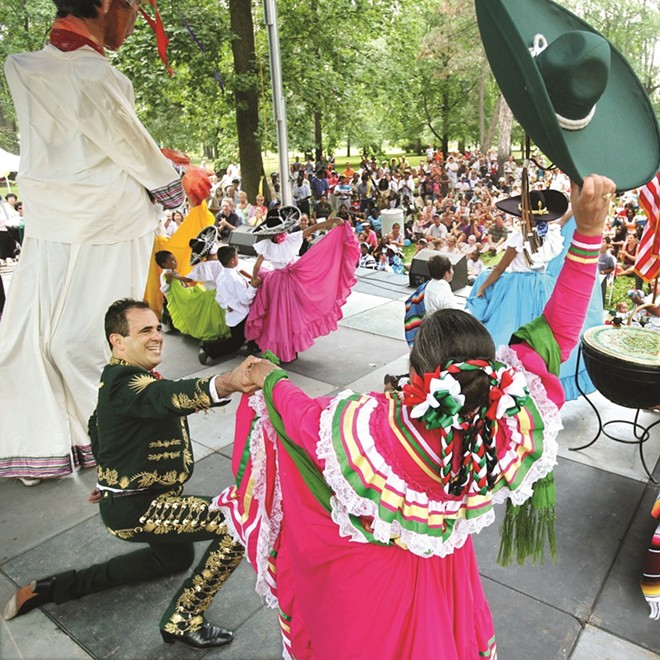 5. The Internationale
If you hate our turd president and his atrocious immigration policies, head out to the Festival of Nations and mingle with the people of many lands. The International Institute of St. Louis' annual end-of-summer party showcases the culture and food of the metro area's large immigrant population, from Bosnia to Vietnam and all points in between. This is what the United States is all about. You may dress, speak and prepare dinner differently than your neighbors, but once you get to America you're an American. There will be discussions of the different belief systems we hold dear, sporting activities, demonstrations of dancing and music, and the most mouth-watering selection of food you've seen since last year's festival. The Festival of Nations takes place from 10 a.m. to 7 p.m. Saturday and 10 a.m. to 6 p.m. Sunday (August 24 and 25) in Tower Grove Park (4256 Magnolia Avenue; www.festivalofnationsstl.org). Admission is free

6. Rockin' Crustaceans
The Maya Café (2726 Sutton Boulevard; www.mayacafestl.com) celebrates its eighteenth anniversary in the traditional fashion, with a Rock & Roll Shrimp Boil. From noon to 8 p.m. Sunday, August 25, Chef Adam Smith will serve up a full Cajun boil with all the fixin's, while Bob Koehler Acoustic Classics and Americana band the Cottonwood Gunners dish out the music. Admission is free, so all you have to pay for is your food and beverages. Gorging yourself on good times and Cajun shrimp isn't the worst way to while away a lazy Sunday in August, bud.

7. The Imagined West
Author Téa Obreht won the Orange Prize for Fiction for her debut novel The Tiger's Wife, which was also a finalist for the National Book Award. The Serbian-American writer's highly anticipated new novel, Inland, is already drawing similar attention. Inland is a Western of a different stripe, in which stalwart frontierswoman Nora lives with her husband and three sons in 1893 Arizona Territory. Her husband has gone in search of water, and her two oldest sons stormed off after a heated argument. Nora's youngest son is certain that a dark beast stalks the wild landscape. Lurie is an immigrant to America and a former outlaw who's currently crossing the country, and his ghost-haunted life somehow intersects with Nora's. Obreht visits the St. Louis County Library Headquarters (1640 South Lindbergh Boulevard, Frontenac; www.slcl.org) at 7 p.m. Tuesday, August 27, to discuss her new novel and sign copies. Admission is free, and copies of Inland will be sold on site by Left Bank Books.