What's the purpose of August? It lolls around, blocking us from autumn and stinking up the place with humidity and things of this nature. Feh. Feh, August! Liven up this garbage month with these exciting events...

1. Talking Spiders
If ever there was a cheesy film made for Minnesota-based Mystery Science Theater 3000, it was the 1975 monster flick The Giant Spider Invasion. Set in Wisconsin (Minnesota's natural enemy), the film's titular stars are actually VW bugs dolled up in spider mufti. Why giant spiders? When a meteor smashes into the Wisconsin countryside, the other-dimensional spiders riding along disembark and start growing at a furious rate (must be all those cheese-fed people they eat). The local astronomer and a vacationing NASA scientist figure out a way to stop them, and a guy who looks a lot like Jim Gaffigan but with a worse haircut rambles around doin' stuff. MST3K veteran Mike Nelson returns to the scene of the crime to mock it all over again with help from old pals Bill Corbett and Kevin Murphy. RiffTrax Live: The Giant Spider Invasion takes place at 7 p.m. Thursday, August 15. You can watch it as it unfolds at the Marcus Ronnies 20 Cinema (5320 South Lindbergh; www.fathomevents.com). Tickets are $13.47.

2. Homecoming
Union Avenue Opera closes its season with Tom Cipullo's modern chamber opera Glory Denied. Inspired by the true story of U.S. Army Colonel Jim Thompson, who endured nine years as prisoner of war in Vietnam. The opera features both a young and an older Thompson, one dreaming of his life in America when he's freed, and the elder version lamenting how much his country and society changed while he was imprisoned. He was essentially trapped in amber, forever living in 1964 pre-war America in his mind while the world kept spinning. Glory Denied deals honestly with the uncomfortable truths many veterans face when they return home: They've changed in ways only another veteran can understand. Union Avenue Opera presents Glory Denied at 8 p.m. Friday and Saturday (August 16 to 24) at the Union Avenue Christian Church (733 North Grand Boulevard; www.unionavenueopera.org). Tickets are $30 to $55 for civilians. Active military personnel pay $15, and admission is free for all veterans.

3. Ramble Returned
The Moonlight Ramble rides again! Last year's bump in the road has been successfully navigated, and a recharged Moonlight Ramble is now ready to ride through the nighttime streets of the city. The 2019 edition of the group bicycle ride officially starts at 7 p.m. Saturday, August 17, at Soldiers Memorial (1315 Chestnut Street; www.moonlightramble.com) with the pre-ride festival. Food trucks will be on site (Wok and Roll, Sarah's Cake Stop, Wayno's International Cuisine) as you stretch and prepare to ride either the seven-to-eight-mile route or the sixteen-to-eighteen-mile route (your choice). The ride starts at 10 p.m., and all participants must wear a helmet and have a bike in good working order (with all the lights and reflectors). Hazard to Ya Booty starts playing at 10:30 p.m. Registration is $25 to $40, with a $150 VIP option if you want to start in the first wave. 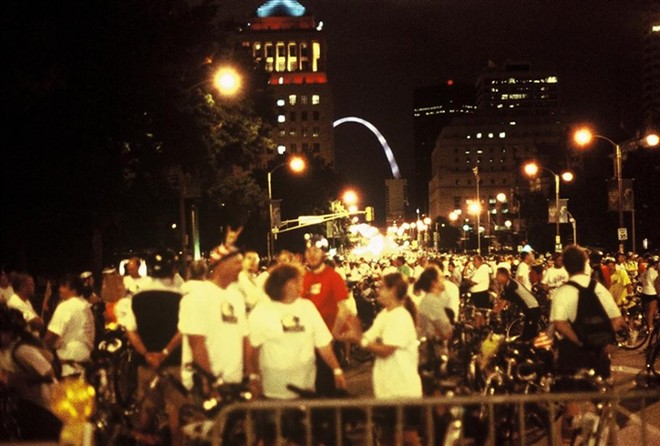 4. A Pressing Engagement
In its sixth year, the St. Louis Small Press Expo has new organizers and more than 100 vendors who make books, poetry, comics, posters, zines and printed, risographed, collaged and letterpressed goods. Participating artists include Mountain of Knives, Jim Mosley, Floating Head, Erika Akire and too many more talented printers to list, and they'll all be selling their work from 10 a.m. to 5 p.m. Saturday, August 17, at St. Louis Public Library's downtown branch (1301 Olive Street; www.stlspex.com). The St. Louis Small Press Expo will also be accepting submissions for its zine collection, and there will be workshops and presentations throughout the event. Admission is free, but bring your cash and spend freely.

5. A Historic Meal
The World's Fare Heritage Festival is one of those uniquely St. Louis events that combines local history with the arts, alongside a healthy serving of food. The fest tips its cap to the namesake 1904 World's Fair with a selection of local memorabilia and historical presentations, while also opening discussions about our current state of affairs. The food and live entertainment are nothing to sneeze at either, with a parking lot of food trucks, vendors and a full slate of bands performing throughout the event. There's also a kid's island within the fest, with games, inflatables and more, as well as a Ferris wheel for everyone's enjoyment. The World's Fare Heritage Festival takes place from 5 to 10 p.m. Friday and 11 a.m. to 10 p.m. Saturday and Sunday (August 16 to 18) at the World's Fair Pavilion in Forest Park (www.stlworldsfare.com). Admission is free.

6. Roamin' in Love
William Wyler's romantic comedy Roman Holiday returns to the big screen once again, thanks to the Classics in the Loop film series. Audrey Hepburn stars as Princess Ann, who escapes her royal minders to have some fun in the Eternal City. American reporter Joe Bradley (Gregory Peck) finds her sleeping on a bench and allows her to spend the night in the safety of his apartment (calm down, it was 1953, so nothing happened). The next morning he figures out who she is, and intentionally bumps into her out in the city with a photographer trailing him. Together Joe and an incognito Ann enjoy everything Rome has to offer, and fall in love. But princesses aren't permitted to end up with reporters, and Joe knows it. Theirs is a whirlwind romance that sparkles with Golden Age of Hollywood brilliance. Roman Holiday is shown at 4 and 7 p.m. at the Landmark Tivoli Theatre (6350 Delmar Boulevard; www.landmarktheatres.com). Tickets are $7 to $9.

7. Brew-Birds
At the time of writing, the St. Louis Cardinals and the Milwaukee Brewers are locked in a battle for the NL wild card slot that's so tight it squeaks. The Brewers are a half-game up on the Cardinals, so this week's three-game series between the two teams is crucial. First pitch for the Cards and Brewers is 6:45 p.m. Monday through Wednesday (August 19 to 21) at Busch Stadium (700 Clark Avenue; www.stlcardinals.com). Tickets are $10.90 to $240.90.