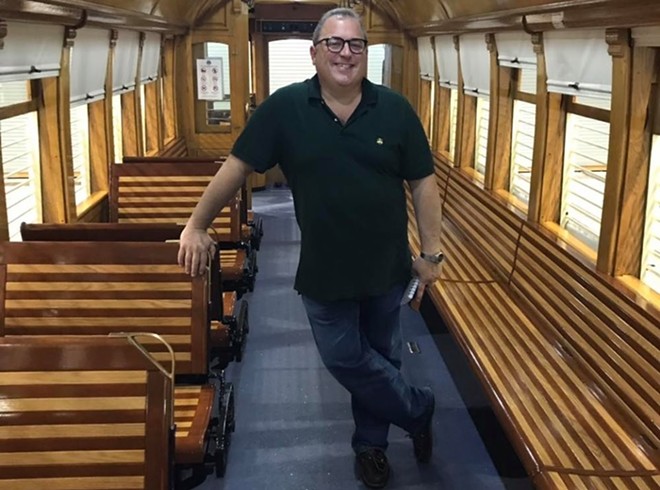 Just when you thought the Delmar Loop Trolley couldn't possibly get any funnier, the old-timey means of transportation gets a new feature sure to bring the laughs: stand-up comedy.

No longer merely the butt of St. Louis' jokes, the trolley will soon feature local comedians delivering sets as it travels along its route in what the Loop Trolley Company has dubbed "Laugh Tracks." At present, there are three dates on the books for the experiment, which is designed to help increase the trolley's ridership. The first event will take place on September 13.

"We're super pumped about it," says Brittany Robbins, a spokesperson for the Loop Trolley Co. "You know, the Loop Trolley is one of St. Louis' great attractions, and this just adds to the experience St. Louis and tourists visiting from elsewhere will be able to enjoy when riding."

The idea to host stand-up comedy on the trolley came from Yale Hollander, a longtime local comedian. He says the seeds were first planted as far back as 2017.

Time passed, and the then-half-hearted idea sat on the shelf. But meanwhile, Hollander started setting up comedy events at unconventional venues across the metro area, including a regular show in Clayton at the Kingside Diner and a show out in Chesterfield Valley at the Bike Stop Cafe. With those endeavors proving successful, he thought back on his harebrained trolley plan.

"Once I started getting into the habit of starting these oddball-location comedy shows I thought, 'Well, I'm gonna take another run at the trolley," he says. "Nothing ventured, nothing gained. But this time I'm gonna go in with an actual proposal, and an actual plan, and an actual vision, now that I've actually been running shows."

Hollander wrote up an outline of his proposal and submitted it through the "contact" section of the Loop Trolley Co.'s website. Barbeau soon reached out — the Trolley Co., it turns out, was totally on board. Hollander was given a three-show commitment as a trial, with more in the offing should the partnership prove to be a success.

The first of those three shows is slated for September 13 at 9 p.m. Featured performers include Kenny Kinds, Angela Smith and Sam Lyons, with guest spots by Ken Warner and Travis Terrell.

The logistics of the arrangement are fairly straight-forward. Comedy and/or trolley enthusiasts are to board at the stop in front of the Pageant for the show, which will begin once the trolley passes the following stop due east. No cover charge is necessary, just a ticket to ride. The show will go on for one full pass on the trolley line, which takes about 40 to 45 minutes.

"We will be on a moving trolley, so that means all of the stops will be called out by the driver," he explains. "So we will have to work within those limits as far as dealing with those periodic interruptions and whatnot, which just kinda adds to the controlled chaos of the event, which I think will add to the fun as much as the actual content of the jokes itself."

The plan is for the comedy shows to take place on the second Friday of each month; October 11 and December 13 are already on the books. (Hollander says they'll be taking November off because that Friday is one of the dates of this year's Flyover Comedy Festival.) If those shows go well, more will be added.

Which, honestly, how could they not?

"I've got my fingers crossed that it's gonna be a winner," Hollander says. "As far as I'm concerned it's too crazy to fail, but then again it may be to crazy to succeed. We'll just have to find out on September 13."