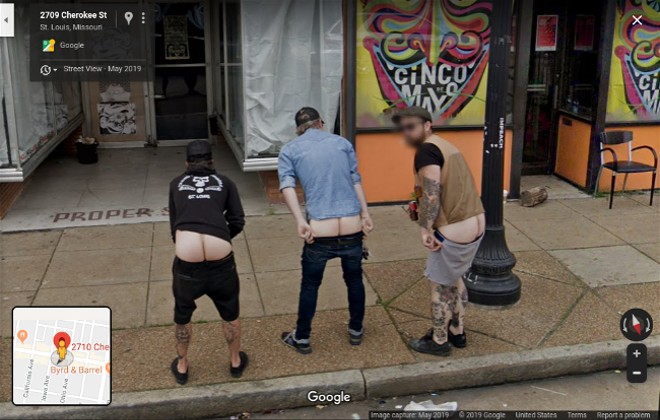 The all-seeing eye that is Google Street View®™ was given a cheeky greeting from St. Louis recently when three noble heroes on Cherokee Street introduced the tech giant's photo-car to the glorious sight that is their bare asses.

The triple-mooning took place in May, according to Google's timestamp, in front of the storefront that most recently was home to House of Eight Legs screenprinting, at 2714 Cherokee Street.

Though they have presumably been online for a few weeks at least, the existence of these fresh butts was brought to the attention of the public at large more recently when a local man named Dustin Bopp shared a screenshot of the scene on Facebook, which has since gone viral. "See, we aren’t so conservative here," he writes.

Bopp says in the comments that this beautiful display was brought to his attention on account of it ending up as the subject of a woman's ire on NextDoor. She called the scene "inappropriate" and said we should all be ashamed, which is about the most NextDoor thing that ever NextDoored.

And we know what you're thinking, and we can assure you this is not Photoshop: Behold the full scene in all its naked, fully-navigable glory right here.