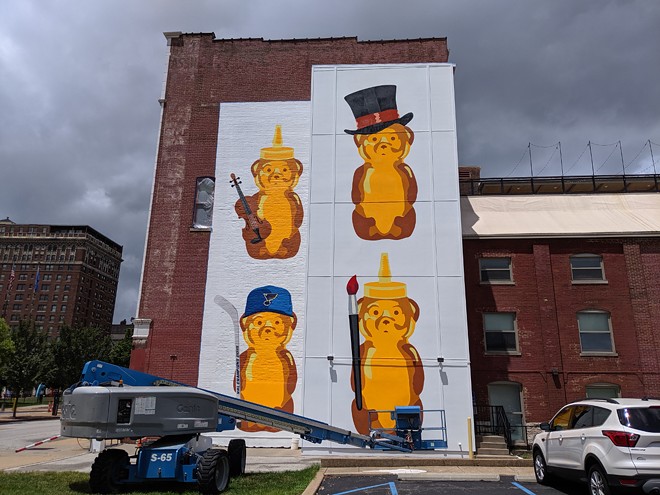 San Francisco artist fnnch has returned home to St. Louis to paint a massive 35-by-50-foot mural at the Centene Center for the Arts.

fnnch (pronounced Finch) is partnering with the Arts and Education Council and the Gateway Foundation and will paint four honey bears on the wall of the building.

Each bear will have a theme: a paintbrush symbolizing St. Louis’ art culture, a top hat to the “gilded age past of St. Louis,” a hockey stick symbolizing the Blues winning the Stanley Cup and a bear with a violin to represent the performing arts scene in St. Louis.

A Kirkwood native, fnnch, 32, has made a name for himself in San Francisco with various honey-bear-themed art around the city. As for why he paints them, fnnch says the figure is a universal symbol of happiness.

“It’s nostalgic and I also find it to be inclusive,” he says. “The honey bear is really bizarre, it’s really surreal. Why is there honey in a bear?” he asks.

fnnch says the bear and other works are meant to catch the attention of passersby because he believes many people don’t visit their local art museum. “I share murals and art for the 95 percent of people that don’t engage in the arts that way,” he says. “Hopefully, they find it interesting and that can be used as a gateway towards having fine arts play a role in people’s lives. It played a role in my life.”

After finishing the mural, fnnch will return to San Francisco to work on a lip sculpture for the annual, nine-day hippie revival event Burning Man.

Coming from an artistic family and known as the stepson of St. Louis sculptor Carol Fleming, fnnch got his start by illustrating in high school and using online resources to improve his technique. He later transitioned into stenciling and spray painting.

fnnch now focuses more on painting murals and has traveled the world, leaving his mark in Chicago, Hong Kong and Tel Aviv. In St. Louis, fnnch has art in places such as the City Museum’s second floor, Atomic Cowboy, and he has left his mark by spray painting ice cream on a bench outside of Clementine’s Creamery in Lafayette Square.

Not all his paintings are honey bears, though. “It’s 50 percent bears and 50 percent everything else,” he adds. fnnch says on top of making the popular bears, he also paints various birds such as cardinals, swans and penguins. In California, he’s often commissioned to paint a lot of California poppies.

“Oftentimes, it’s a collaboration between me and whoever commissions the mural,” he says. “It’s all my work, but sometimes it’s dictated by when I get permission to do it.”

fnnch held an event for the mural on July 17 at the Centene Center for the Arts (3547 Olive St; 314-289-4000). To share photos of the mural, the Arts and Education Council encourages others to use the hashtag #fnnchstl on Instagram to share pictures of, and selfies with, the mural.

Correction: The name of the Gateway Foundation was incorrect in an earlier version of this story. We regret the error.