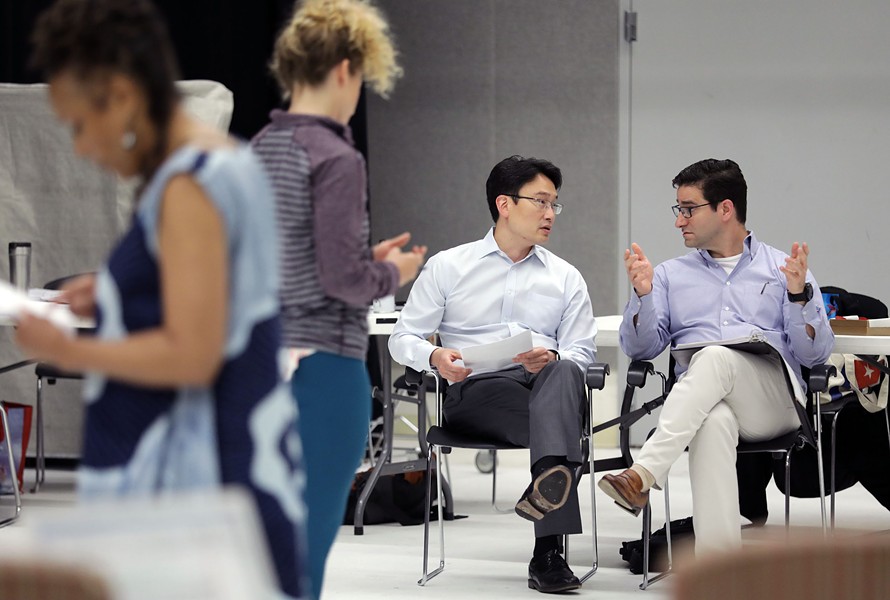 The technical aspect of neurological diseases such as a stroke can be hard to understand. A new play called BrainWorks, which premieres next week at the Loretto-Hilton Center, aims to help its audience understand what goes on inside our heads when something's not right.

Created by Barnes-Jewish Hospital in partnership with the Nine Network, BrainWorks features four one-act plays revolving around Alzheimer's, meningioma-class brain tumors, epilepsy and strokes, all explained by neurosurgeons Albert Kim and Eric Leuthardt and acted out by a cast.

“Albert and I always like having conversations about the brain,” Leuthardt muses. “The whole thesis was, ‘Let’s bring people into this conversation.’”

And so they did.

From creating the Brain Coffee podcast that expands on health and wellness to evolving the BrainWorks concept into a play and a future PBS television show, friends Kim and Leuthardt are brain geeks at heart and want the audience to become engaged in neuroscience. They began working on the theater version of BrainWorks around four years ago.

Kim calls the play a 360 experience about what goes on in the brain and the human stories that follow each experience.

“This is where we really try to interweave the human stories in compelling, interesting, sometimes sad, sometimes funny stories on what it is to be human and what it’s like to get sick with specific diseases,” says Kim.

Beginning initially with what could be described as a TED Talk, Kim and Leuthardt approached Seth Gordon, the former associate artistic director for the Repertory Theatre St. Louis and current head of the Oklahoma University school of drama, to adapt it into a theatrical event.

“One of the things we’re focusing on is having this be a play about doctors not knowing what they need to know, but who are trying to figure out how to solve each patient’s problems,” says Gordon.

BrainWorks was ultimately written by four New Dramatists playwrights, each of whom have had personal experiences with the conditions discussed in the play.

Gordon also says that the play will focus more on the patient and what they’re going through and emphasizes that the scenes are “dramatically moving as they are inspirational.”

“It’s a play about people who are struggling and the challenges that their lives will have and moving with as much fortitude and dignity through that period of life as they can,” Gordon says. “That’s the part of their life that we see in each of these plays.”

Both Kim and Leuthardt acknowledge that it's difficult to explain medical scenarios to a general audience, but say they've had some experience even before getting involved with theater.

“It’s something we do every day with our patients,” says Kim. "It’s super tough to figure out how to translate this into something everybody can understand.”

While Leuthardt says the play entertains the audience, he doesn’t want that to distract from how these diseases affect patients and those around them. “Essentially, it’s kind of like this window into people’s minds as they’re experiencing this disease,” he says.

BrainWorks will be performed July 19 to July 21 at the Loretto-Hilton Center for the Performing Arts on the campus of Webster University (130 Edgar Road, Webster Groves; www.ninenet.org/brainworks/). Tickets are $25 to $75.

BrainWorks will be recorded for broadcast in St. Louis on KETC (Channel 9), and potentially, air on public television stations across the country in 2020.