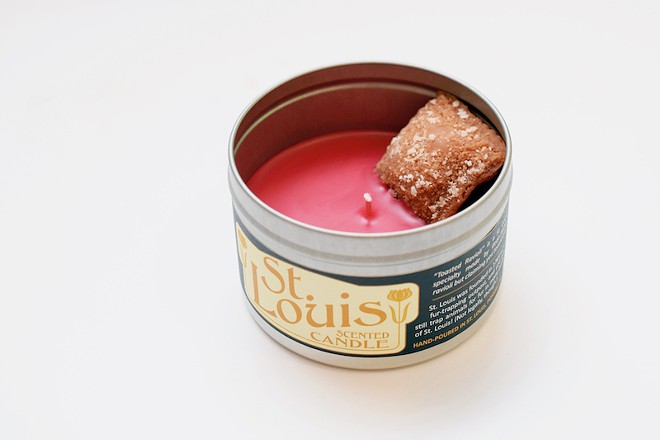 What does St. Louis smell like? A big muddy river? A processed cheese product? Ask many south city residents, and they'd surely say the sweet yeastiness of the AB brewery.

But for J.D. and Kate Dobson, the St. Louis-based authors and candlemakers behind the hilarious Hottest Heads of State and the equally hilarious Trump-scented candle that debuted in 2016, St. Louis smells like toasted ravioli. The only catch in transforming that conclusion to a new product in their line of whimsically scented candles was figuring out how to capture a t-rav in wax form.

And, they'll have you know, that wasn't easy.

"Unlike sweet scents, savory food-scented candles have an uncanny valley issue," the Dobsons explain by email. "We used to use a bacon smell for our Trump candle that smelled exactly like bacon, and we LIKE the smell of bacon, and yet smelling that scent from a candle was disturbing and awful. Along the same lines, we tried doing a few 'fried breading' and 'meat' smells, and some of them were pretty realistic, but not in a good way. We ended up landing on a combo that is closer to marinara sauce (tomato, basil, a very slight dash of fried dough and cheese)." Naturally, it has the most cunning t-rav perched on top — a wax effigy that looks remarkably like the real thing.

As the Dobsons explain, choosing a scent for St. Louis wasn't quite as easy as declaring it toasted ravioli and calling it a day. It was, instead, an arduous three-year effort. "We have hosted multiple dinner parties that were actually thinly disguised STL candle focus groups," they say.

The result, though, is uncanny, in looks, aroma and spot-on liner notes. This is one candle that may well make you laugh out loud. And if you're not into St. Louis smells, well, did they mention they have a Mayor Pete one?

You can get the St. Louis-scented candle via the JD and Kate Industries website or at the Novel Neighbor in Webster Groves. Note the Dobsons, "We don't know how well they're selling there, though, because we're afraid to ask."