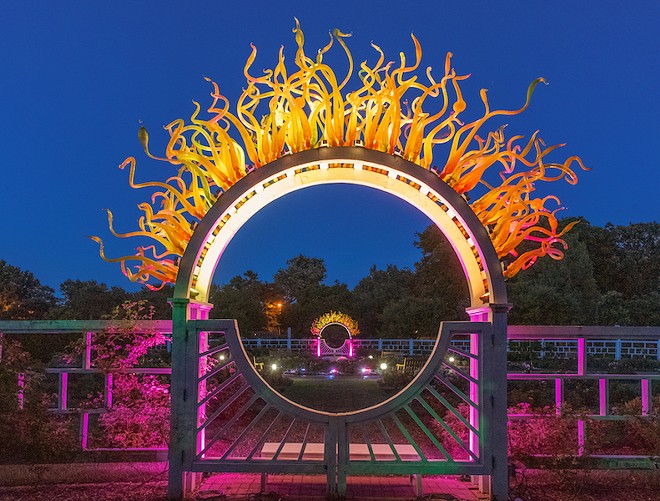 While Illinois is preparing to light up with the passage of recreational marijuana in a few months, the Missouri Botanical Garden (4344 Shaw Boulevard, 314-577-5100) is holding a party of its own as #NatureGetsLit at Garden Party Lights.

“It’s a great place to take your friends and family and spend the night for a summer evening in the garden and really soak up the atmosphere,” says Catherine Martin, public information officer for the garden.

Opening to members as a preview at 6 p.m. on Friday, July 5, and to the public at 6 p.m. Saturday, July 6,  the light show includes a biergarten and food at the Cohen Cantina. The biergarten will host performances from bands such as Dizzy Atmosphere, Mad Keys and the Gaslight Squares starting Fridays and Saturdays.

The event features a slightly different layout and theme from the winter Garden Glow. The lights and laser show are unique to the event, Martin says.

Floral and nature patterns will be projected on the Tower Grove House, a laser show provided by AVI Systems and Theatrical Concepts will feature St. Louis imagery and floral themes at the Cohen Amphitheatre, and light projections will be visible along mile-long path in the garden.

Tickets cost $3 to $20, and unlike the winter-themed Garden Glow, tickets are not sold for specific time slots. Visitors can also get four tickets and four drinks for $70 with the garden’s party pack special.

Editor's note: A previous version of this story included incorrect information about the location of the band performances. We regret the error.