The Best Things to Do in St. Louis This Weekend, June 28 to July 2 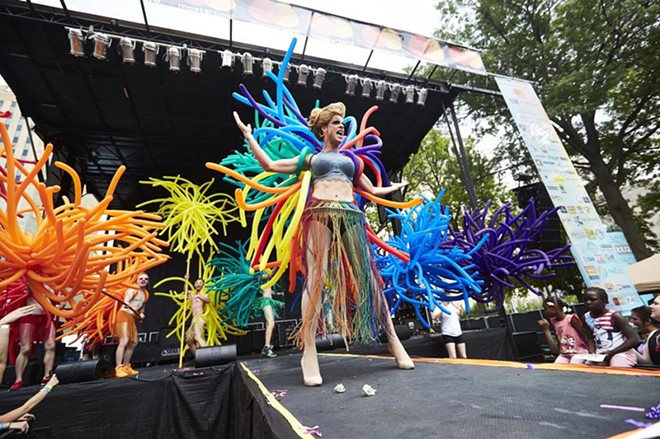 It's gonna be a hot weekend, and not just in terms of temperature. There are a couple of big community events happening, as well as one of the more action-packed theater gatherings on tap. Read on, readers.

1. Birth of a Nation
Almost 50 years before Lin-Manuel Miranda’s Hamilton explored the lives and personality clashes of the founding fathers, Sherman Edwards and Peter Stone took up the subject of these legendary figures in their musical 1776. The Continental Congress is locked up trying to decide the matter of American independence, and personal concerns among the delegates are only increasing after a year’s worth of meetings. John Adams, the irascible Massachusetts delegate, believes independence is the only choice worth debating, but everyone else is sick of him talking. His friend Benjamin Franklin suggests using a more likable man as his proxy might yield better results. Virginia’s Richard Henry Lee might just be the man. But when the Congress determines that a unanimous vote is necessary to approve independence, Adams has to do more bargaining and sweet talking than he would like. 1776 shows the difficult birth of a nation, and the difficult men who fought their way clear to a bouncing, baby country. The Muny in Forest Park (www.muny.org) presents 1776 at 8:15 p.m. Thursday through Wednesday (June 27 to July 3). Tickets are $15 to $105.

2. Bite-Size Plays
A sizable chunk of St. Louis’ robust theater scene will be stationed in Grand Center (North Grand and Lindell boulevards) this weekend for the Grand Center Theater Crawl. This pop-up theater experience presents short shows ranging from the classics to freestyle operas at venues both traditional (the Kranzberg Arts Center) and unusual (Miss M’s Candy Boutique). Participating companies include St. Louis Shakespeare, Gateway Opera and Midnight Company (which will be performing a new play, "Patient #47," about a dying man and his caregiver). Sessions start at 7 p.m. Friday and 2 or 7 p.m. Saturday (June 28 and 29), and not all plays are presented at each session. Visit www.stlpublicradio.org for the full schedule and synopses of each show. 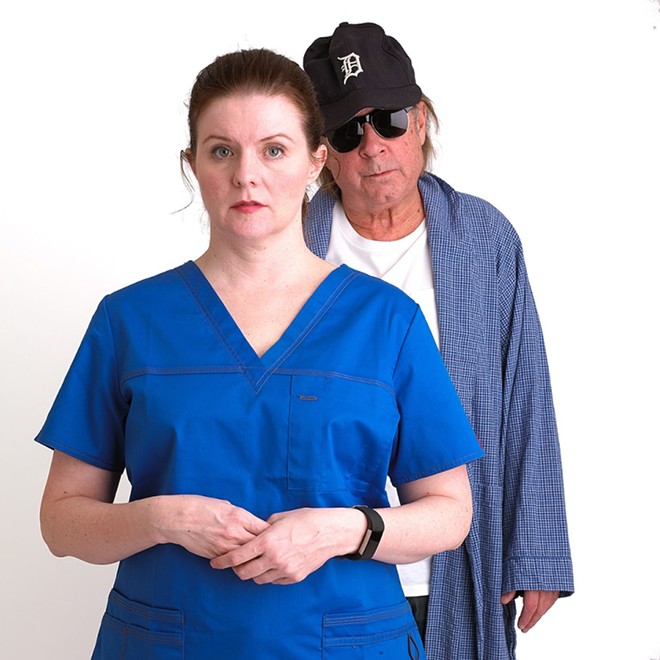 3. The Women’s Revolution
Playwright Olympe de Gouges has revolution on her mind. Not the kind that’s sweeping late eighteenth-century France, however; she has bigger plans than guillotines can solve. Olympe wants both the end of slavery and equality for women. She’s joined by Marie Antoinette, who mainly has survival on her mind, and Charlotte Corday, the woman who killed revolutionary thinker Jean-Paul Marat. Olympe’s friend, Marianne, joins the three women to discuss what it really takes for a woman to be revolutionary in this troubled time. Lauren Gunderson’s play The Revolutionists mixes historical figures with fictional characters to comment on our regressive culture and its short attention span. Insight Theatre Company presents The Revolutionists at 8 p.m. Thursday through Saturday and 2 p.m. Sunday (June 28 to July 14; no show on July 4) at the Marcelle Theater (3310 Samuel Shepard Drive; www.insighttheatrecompany.com). Tickets are $20 to $40.

4. 40 Years of Parties
It’s a year of nice round numbers for Pride Fest, which celebrates 40 years of increasingly larger parties in the name of LGBTQ+ visibility and pride, while also commemorating the 50th anniversary of the Stonewall Riots. The LGBTQ+ movement has come a long way in a half-century, but the fight isn't over. This year’s festival takes place from 11 a.m. to 7 p.m. Saturday and 11 a.m. to 6 p.m. Sunday (June 29 and 30) at Soldiers Memorial (1315 Chestnut Street; www.pridestl.org), and features vendors, interfaith celebrations, special areas for families with children and a designated area for the 25 and younger crowd to hang out. There’s also a full schedule of live entertainment, with Swedish duo Icona Pop and Taylor Dane headlining on Friday and Saturday, respectively. And don’t miss the grand parade, which starts at noon on Sunday. It’s gonna be big — an estimated 300,000 people attended last year, and this year may break that record. Admission to Pride Fest is free, but if you can spare $5 (or more), donate at the gate and help defray the costs of the festival. 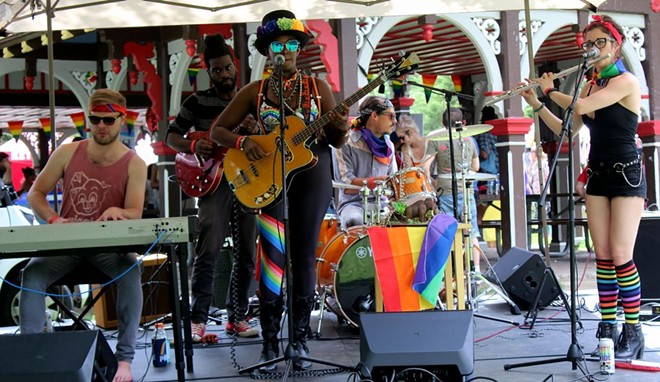 5. Party for the People
Tower Grove Pride continues to grow in size and influence. The community-centric celebration of LGBTQ+ (and allied) people takes place from 11 a.m. to 8 p.m. Saturday, June 29, at Tower Grove Park (4256 Magnolia Avenue; www.towergrovepride.com), and the emphasis is on people and the neighborhood. There will be games (both yard and carnival), more than 250 vendors, local bands (including the Asia Major, KG Lang and Party McFly) and an estimated 10,000 people under the leafy trees of one of the city's best parks. Admission to Tower Grove Pride is free.

6. Do Donuts
If you've ever wanted to burn your breakfast calories even while you're eating them, St. Louis Tour D'ONut 2019 is the event for you. With wheels spinning along the city pavement and doughnuts circling around their stomaches, cyclists will be taking a trip to five independently owned doughnut shops in one morning. Tour D'ONut will commence at 8 a.m. on Saturday, June 29, in Sublette Park (5701 Arsenal Street) and end around noon.

The noncompetitive "bakery-themed take on a bar crawl," as described by co-organizer Matt Menietti, features stops at five local shops: O'Fashion Donuts, World's Fair Donuts, Vincent Van Doughnut, Pharoah's Donuts and John's Donuts. The event is a reboot of one that lasted several years, starting in 2011. (Tour D'ONut is not related to the long-running Tour de Donut held in Staunton, Illinois.) Triathlete and doughnut enthusiast Menietti says he had a great time at the previous events and, after completing a Whole30 diet, decided to reboot it alongside co-organizers Ted Floros and Grace Kyung. "I probably cycle to make up for all the carbs I'm eating," Menietti says. He also hopes to bring business to local doughnut shops.

While people might love doughnuts from supermarkets like Schnucks, and Menietti says they do a pretty good job, he thinks the smaller shops get overlooked. And while the RFT once lazily took a drive around St. Louis' doughnut scene, the D'ONut route (outlined here: Facebook.com/tourdonut, just under a "manageable" fifteen miles, is intended to be doable for "the average biker," balancing advanced and casual cyclists alike, he says. "We're not planning on going at a snail's pace, but we're not going to go too fast either — knowing that people will take some time to actually stop at the actual store," he adds. Attendees are encouraged to wear doughnut-themed apparel, with prizes available for those that get into the glazed, doughy spirit. Regardless, the event is looking to attract "people who enjoy biking or doughnuts or both." Perhaps you might buy some PEDs: performance-enhancing doughnuts.
—James Pollard

7. Artful Doggies
Stray Rescue and its staff of employees and volunteers do a great deal of working rescuing and re-homing dogs, cats and select farm animals, and they do it year-round. It takes more money than you think to get treatment, feed and care for the creatures in their care, and bake sales and fundraising appeals only go so far. That’s why the shelter’s Urban Wanderers fundraiser is crucial to Stray Rescue’s mission. This art show and auction features art inspired by the stories and faces of numerous rescued animals. Each piece in the show captures the essence of a dog or cat who was saved from dire circumstances and now needs a home. If one of the pieces moves you and you’re the highest bidder, you go home with that artwork. Of course, you could always adopt an animal to go with your new painting; it’s not required, but should prove very rewarding. This year’s Urban Wanderers art auction takes place from 7 to 11 p.m. Saturday, June 29, at the Four Seasons Hotel (999 North Second Street; www.strayrescue.org/uw). Admission is free.

8. An Animated Romance
Shizuku is a fairly typical fourteen-year-old girl. She loves reading and she thinks sometimes about being a writer, but she’s not really certain what she wants to do. When Shizuku notices that every book she’s checked out from the library has previously been borrowed by the same person, she resolves to find and meet this Seiji. Despite a rough first meeting, Shizuku soon admires him for both his dream of becoming a great violin maker and his doubts about his own skill. When Seiji leaves for an apprenticeship in Italy, Shizuku resolves to complete a project of her own: She’ll come up with and complete an original story. Studio Ghibli’s Whisper of the Heart is the rare teen romance that is both romantic and tender. Fathom Events presents Whisper of the Heart at 7 p.m. Monday and Tuesday (July 1 and 2) at the Marcus Ronnies Cine (5320 South Lindbergh Boulevard; www.fathomevents.com). Tickets are $13.47.