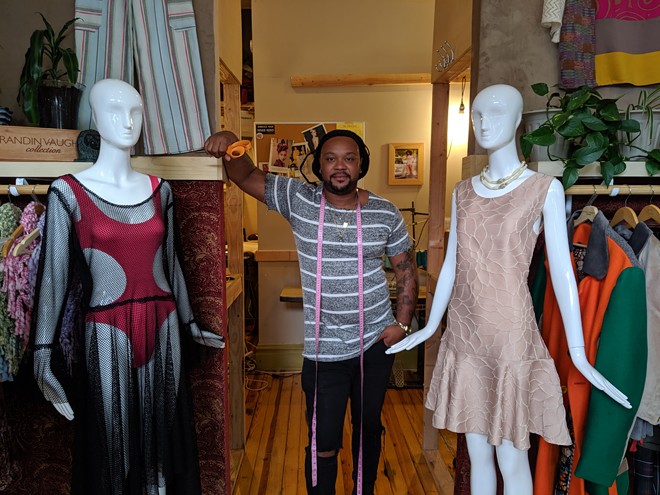 Designer Brandin Vaughn has hit it big creating clothes for actresses, producers and musicians, counting among his clients Vivica A. Fox and Sweetie Pie's restaurant owner Robbie Montgomery. He does it all from a small shop on Cherokee Street.

Brandin Vaughn Collection (2604 Cherokee Street, 314-325-2341) is adjacent to Foam coffee shop and next door to Teatopia. His boutique features dresses, pants and other unique women’s wear. Prices range from $89 for separates to $234 to some top-of-the-line dresses.

Citing Ralph Lauren as a marketing influence and Valentino Garavani as his design influence, Vaughn also finds inspiration in his mother, wife and daughter.

Vaughn designs clothes for a variety of people, but his store mostly focuses on women. “I love men’s coats, but 90 percent of the store is women's wear. I love to design a nice day dress for a woman that she can wear to work, then transfer it to the evening and feel like a million bucks,” he says.

Adhering to the “if it’s not broke, don’t fix it” theory, Vaughn plays it safe when it comes to designs. “I like to do everything in threes,” he admits. “If I see something, and I see it three times in three different places, then I know that’s going to be a popular thing coming down the pipeline.”

Most of the time, Vaughn prefers to let the fabrics speak for themselves. “I love telling the story through fabric. I believe simple and elegant is the best way,” he says.

Born in Kennett, Missouri, and raised in University City, Vaughn realized his talent for fashion and design as a ten year old, when he made couch cushions from scratch for his family. Vaughn later honed his skills by transforming denim pants into skirts to sell to his friends in school.

“I saw it was a lucrative and profitable business,” he reflects.

After graduating high school, Vaughn moved to Chicago to attend the Art Institute. He met his wife there and got an internship with an independent designer that became a full-time job after he received his bachelor’s of science and fine arts with an emphasis in fashion design from the institute in 2008.

The career services department of the Art Institute connected him with a job at Macy's Glamorama fashion show. It was then he met and worked closely with Beyoncé and her younger sister Solange Knowles, as well as MC Hammer and Cyndi Lauper.

“From that experience, I got up close and personal to stardom and was able to work hand-in-hand with [them], and see what happens when fashion and entertainment collide to produce a magnificent show,” he says.

Around 2013, Vaughn returned to St. Louis with his wife and opened up a shop in Create Space, a co-op workspace in the Delmar Loop. When that closed, Vaughn operated various pop-up shops around the metro area before he was approached by a Cherokee Street developer.

“He was persistent with emailing, calling and he was determined to get me in. So I broke down and did the numbers and couldn’t pass it up,” he says. “It’s different working in a studio space than working at home and I knew that I had to eventually get out of the house.”

Vaughn sent an email to his followers asking for donations to cover the deposit for the Cherokee Street space. In February 2018, the boutique officially opened.

Vaughn is hosting an event September 13 at the Marquee Restaurant and Lounge (1911 Locust Street, 314-943-9657) showcasing 100 of the 1,000 garments he has produced since he began designing clothes. The event starts at 7 p.m. and ticket prices will be announced in the coming months.

Brandin Vaughn Collections is open from 11 a.m. to 6 p.m. Tuesday through Saturday and noon to 4 p.m. on Sunday.