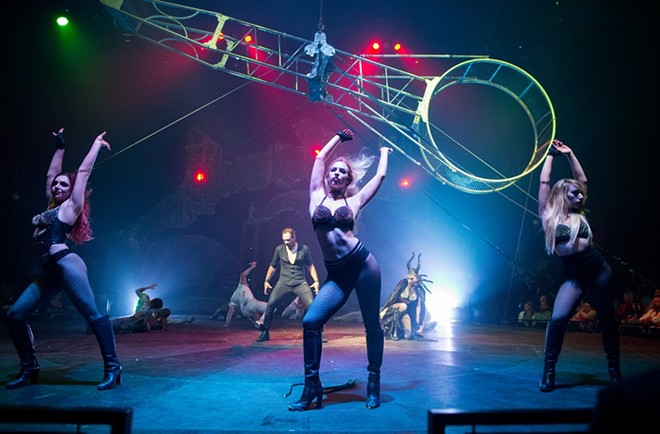 Hey, remember when the Blues won the Stanley Cup? Sadly there's no massive parades planned this weekend, but there's still great stuff to do.

Like what? Like so! In addition to the city's largest all-local music festival, which takes place in the Grove Friday and Saturday for the low price of $20, here are this weekend's best events.

1. Circus of Scares
Paranormal Cirque isn't a family-friendly circus. With scary creatures and circus arts ranging from aerial to horizontal bar performances, no kids are allowed into this R-rated show, which fuses circus, illusion and cabaret performances. Even those ages thirteen to sixteen may attend with a parent only. "It's like Disney World for adults," says Sarah Kessler, the public relations and media representative for Cirque Italia, the company that produces Paranormal Cirque. Held in a black and red tent in the parking lot of the St. Louis Galleria (South Brentwood Boulevard and Clayton Road, Richmond Heights; www.paranormalcirque.com), the show features the Wheel of Death, magic and wheel performances. Show times are at 7:30 p.m. Thursday and Friday, 6:30 and 9:30 p.m. Saturday and 5:30 and 8:30 p.m. Sunday (June 20 to 23). Tickets are $10 to $50.
—Joshua Phelps

2. The Scandal of Love
Most of Europe in the early twentieth century was a-twitter over Sholem Asch's daring play The God of Vengeance, a drama for the Yiddish stage that featured a Jewish brothel runner, his lesbian daughter in a tender and honest rainy love scene, and the hurling of a Torah. It was a lot for audiences to process. When Asch approved an abridged English production for the United States, he didn't suspect what he was in for. While the radical Jewish community welcomed this bold new play, the Orthodox community was aghast at the sacrilege and the sheer indecency of Asch's script. The state of New York charged all involved with indecency, and the play was removed from the stage. Contemporary playwright Paula Vogel revisits and reimagines Asch's play in her drama, Indecency. In it the original actors return from the dead to share their play in a new era. With a klezmer band onstage, Indecency flits from Poland to Germany to America and back as it runs through the controversy and into the war years, as an aging Asch grows more uncomfortable with his young work and watches the rise of the German war machine and anti-Semitism. Max & Louie Productions presents Indecency at 7:30 p.m. Thursday, 8 p.m. Friday and Saturday and 3 p.m. Sunday (June 20 to 30) at the Grandel (3610 Grandel Square; www.maxandlouie.com). Tickets are $40 to $300.
—Paul Friswold

3. Hedwig's Back
Grab your wigs and get ready to rock as The Q Collective presents Hedwig and the Angry Inch. John Cameron Mitchell and Stephen Trask's musical follows Hedwig Schmidt and her wild life that begins by growing up as a boy in East Germany. Hedwig shares the story of her botched sex change operation, tales of love and loss, and her struggle to find fame with her rock/standup comedy band the Angry Inch. Luke Streingruby stars as Hedwig and Sarah Gene Dowling plays the Jewish drag king, and Hedwig's husband, Yitzhak. Performances are at 8 p.m. Thursday and Friday and 8 and 10:30 p.m. Saturday (June 20 to 29) at the Monocle (4510 Manchester Avenue; theqcollective.theater), and tickets are $20 to $75.
—Joshua Phelps

4. Take a Risk
Supposedly, everyone has a story in them, and Kevin Allison encourages people to tell them. And not the fictitious ones, either. Allison's podcast Risk! features people from all walks of life telling real stories from their past, particularly the stories they thought they'd never share with a stranger, let alone a room full of them. He brings his Risk! Live tour back to St. Louis at 8 p.m. Saturday, June 22, at Delmar Hall (6133 Delmar Boulevard; www.delmarhall.com), which is where guests Amy Brooks, Susanna Lee and Rafe Williams will tell their true and risky tales. Tickets are $20.
—Paul Friswold

5. Loopy Fun
The Delmar Loop throws itself into summer on Saturday, June 22, and you're invited to come along for the ride. At 9 a.m. the Loop Farmers' Market starts things off with culinary demonstrations; as shops along the strip open, there will be musical performances, readings, art shows and more. Free pianos will be parked at key locations along the street for impromptu performances by anyone who wishes to play. The Loop Arts Fest continues through 3 p.m. in the Delmar Loop (5900 to 6200 blocks of Delmar Boulevard; www.visittheloop.com). Admission is free.
—Paul Friswold 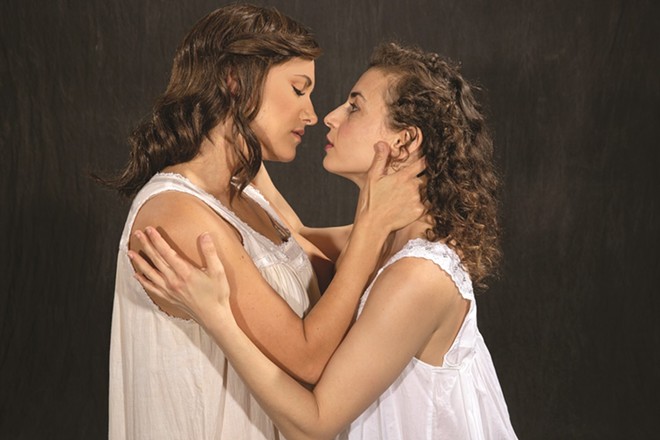 6. Hail Marsha and Sylvia
If you are one of the nineteen people who sat through Roland Emmerich's whitewashed 2015 film about the Stonewall riots, forget every moment of that nonsense (if you haven't already). Trans women of color Marsha P. Johnson and Sylvia Rivera were the leaders of the uprising at the Stonewall Inn 50 years ago, an act of defiance that started the gay rights movement. It was also the origins of Pride month, which commemorates and honors the actions of that night. The Gateway Men's Chorus celebrates the transgender activists who stood up and shouted "no more!" at its Pride month concert, 1969: Stonewall Remembered. The group will sing somber songs as well as disco favorites at the concert. Performances are at 8 p.m. Saturday and 2 p.m. Sunday (June 22 and 23) at the Touhill Performing Arts Center on the University of Missouri-St. Louis campus (1 University Drive at Natural Bridge Road; www.gmcstl.org). Tickets are $20 to $25.
—Paul Friswold

7. Fancy Fabrics
The consumers of middle- and upper-class society in the eighteenth century developed a passion for rural scenes of traditional country life, just as the introduction of copperplate printing to the textile industry made it possible to produce fabrics with intricately detailed scenes printed upon them. Textile factories began churning out yards of fabric with shepherds, village fêtes and strolling couples for a market that could afford to buy them as furniture coverings, bedding and curtains. Printing the Pastoral: Visions of the Countryside in 18th-Century Europe, an exhibition at the Saint Louis Art Museum, includes numerous examples of the craft, several of which have never before been shown at the museum. The centerpiece of the exhibit is a reconstructed bed with printed bedding and curtains. Printing the Pastoral continues through December 1 in gallery 100 at the Saint Louis Art Museum (1 Fine Arts Drive; www.slam.org). Admission is free.
—Paul Friswold