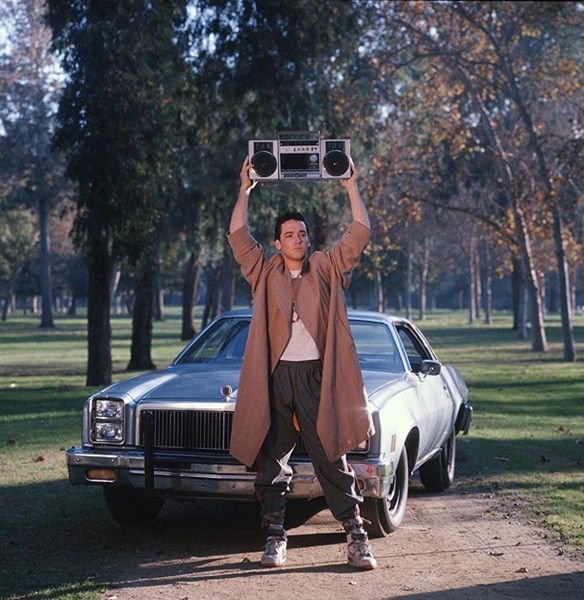 It is the first weekend of the St. Louis Blues' reign as Stanley Cup Champions, and so far it's been glorious. The victory parade is scheduled for noon on Saturday, June 15, and it will start at Eighteenth and Market streets. After that it heads east and end at Broadway and Market, followed by a rally and good-natured merriment on the Arch Grounds. Want more, ready on, you winners, you.

1. St. Louis in Profile
Ryan Schuessler didn't set out to edit an anthology. Instead, it was the byproduct of a bit of defensiveness toward his hometown.

"I wrote for Belt Publishing's magazine a couple years ago," Schuessler explains. "Belt has a city anthology series, and out of curiosity I asked why they didn't do a St. Louis one, and they said they hadn't found an editor. That started the conversation."

Schuessler is a Chicago-based freelance journalist whose work has been in The Guardian and the St. Louis Beacon, but he grew up in Kirkwood. As a kid, he followed the standard progression of going to the city to visit the Delmar Loop, see shows at the Fox and go to Cardinals games, which he confesses yields a very narrow view of the city proper.

The St. Louis Anthology is divided into three different sections ("History," "Memories" and "Realities") and features poetry as well as prose. Contributors run the gamut from St. Louis lifers to transplants to immigrants, and the book reflects that wealth of experiences and voices.

"I love Vivian Gibson's 'Sun Up to Sundown,'" Schuessler raves. "She's in her 70s and never been published before, but she's working on her memoirs." Gibson's story recounts her childhood memories of her grandmother, who worked as a housekeeper for a wealthy white family in an unnamed suburb. It touches on poverty and the "sundown" laws that kept black people out of entire swaths of the county after dark.

"The poems by Maja Sadikovic, about the Bosnian immigrant experience and the trauma that inspired it, are also very moving," Schuessler concludes.

"I think everybody in St. Louis lives in their own silos because it's still such a segregated city," Schuessler muses. "There are so many versions of St. Louis that we probably wouldn't recognize the city if we put them all together."

Schuessler and several contributing writers will read from the anthology and perform at 7 p.m. Friday, June 14, at Earthbound Brewing (2724 Cherokee Street; www.left-bank.com). Admission is free.

2. She Gave Him a Pen
Cameron Crowe's Say Anything... redefined romance for disaffected Gen-Xers (spoiler alert: it involves boom boxes and some light stalking). Lloyd Dobbler (John Cusack) is an aimless high schooler who hangs out with female friends Corey and D.C. and kickboxes for fun. Then he encounters class valedictorian Diane (Ione Sky) and decides to pursue her, despite her disapproving father (the great John Mahoney). Lloyd is an eternal optimist, and he won't quit; now, where did he put that boom box? The Touhill Performing Arts Center on the University of Missouri-St. Louis campus presents Say Anything... at 7:30 p.m., with John Cusack in attendance. After the film, Cusack will talk about the making of Say Anything... and his long and varied career. Tickets are $39.75 to $69.75.

3. Coming Home
Charles Blow has made it out of his small Louisiana hometown and is in college working toward his future when he learns that a figure from his past has blown back into town. Just like that, Charles is in his car and driving toward home so he can settle things once and for all. Will he abandon everything he's worked for to return to that grim town he finally escaped? The new opera Fire Shut Up in My Bones takes its name and subject matter from a memoir by New York Times writer Charles Blow, and features music by jazz musician Terence Blanchard and a book by Eve's Bayou screenwriter Kasi Lemmons. Opera Theatre St. Louis presents Fire Shut Up in My Bones at 8 p.m. Saturday, June 15, at the Loretto Hilton Center (130 Edgar Road; www.opera-stl.org). Tickets are $30 to $107, and the show is performed five more times in repertory through June 29.

4. Up in the Air
After completing a five-year tour with Cirque Du Soleil in January and juggling tours around the country, circus performer and variety artist Thom Wall returns to his hometown of St. Louis on Saturday, June 15, for World Juggling Day. Wall will be performing a free show at the Carpenter Branch of the St. Louis Public Library (3309 South Grand Boulevard; 314-772-6586) at 3:30 p.m. “It’s my first time coming back to St. Louis to perform in a little while,” Wall said. “It’s gonna be a whole lot of fun,” he said. “If you imagine stand-up comedy combined with TEDx, combined with a juggling show, that’s basically what this event is gonna be like.” In addition to juggling, Wall will sign his self-published book Juggling – From Antiquity to the Middle Ages (Modern Vaudeville Press). The book, which won an award for best non-fiction title from Next Generation Indie Book Awards in 2019, will be sold on-during the event. For more information about Wall’s book and tour schedule, visit www.thomwall.com. Joshua Phelps

5. Night Under the Stars
Looking to drink spiked punch legally and dance the night away without the bad high school memories? Mad Art is giving St. Louisans a second chance with A Starry Night: The Adult Prom on Saturday, June 15. The Vincent van Gogh-inspired event features live performances from '80s and '90s cover band Pedestrians, drinks and appetizers, as well as a selfie station operated by Mad Art owner Ron Buechele. Attendees will vote for the best dressed, the best couple and prom king and queen. Mad Art's Adult Prom (2727 South 12th Street; 314-771-8230) runs from noon to 7 p.m. Admission is $15 and tickets can be purchased at bit.ly/MadArtProm. Plus, $1 from each ticket sold goes to support the Soulard neighborhood and its Historic Signage Project.
—Joshua Phelps

6. Shoes Make the Man
Charlie inherits the family shoe factory, and with it the headaches of a changing market, the constant demand for lower prices and a resentful staff. A chance encounter with drag performer Lola makes Charlie realize that there's an untapped market for well-made women's footwear in men's sizes. His girlfriend, Nicola, would rather he shut down the factory and enter the lucrative world of real estate, but Charlie is starting to feel a sense of kinship with Lola; they're both sons who disappointed their fathers in different ways. The musical Kinky Boots deals with drag fashion and the father-son bond, with songs by pop music legend Cyndi Lauper and a book by Broadway legend Harvey Fierstein. The Muny presents Kinky Boots at 8:15 p.m. Wednesday through Tuesday (June 19 to 25) at the Muny in Forest Park (www.muny.org). Tickets are $15 to $105.