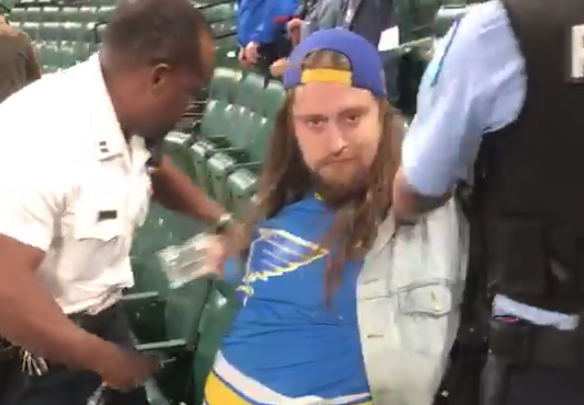 One lifelong Blues' fan's victory lap was cut short last night thanks to a trespassing arrest at the close of Game 7 of the Stanley Cup finals, but his sentiment as he was slapped in cuffs is one that surely everyone in St. Louis can get behind: Protect. The. Cup.

The incident of Justin Poole's arrest was captured on video by a bystander. Poole says he was at Busch Stadium when everything went down. It had been about fifteen minutes since the game wrapped up, and Poole was in hockey heaven.

"Fireworks are exploding, people are cheering, I’m crying and hugging total strangers," Poole explains. "A lady leaps into my arms and we kiss. I feel a tap on my shoulder. I ignore it. Someone starts pulling at my jacket and yelling in my ear, 'Sir, it’s time for you to go.'”


Poole says he turned to see an usher encouraging his egress. Gesturing to the crowd of people also remaining in the stadium, he then asked the usher if those people had to leave too, to which she apparently replied, "No, it's just time for you to go."

Poole disagreed, and turned back to the player interviews still being shown on the scoreboard. That's when the cops came.

"The first cop from the video immediately grabs me by my jacket and starts trying to pull me into the aisle," Poole explains. "I repeatedly ask him why I’m the only one being told to leave when there are families all around me. He tells me I’m trespassing. I ask if the little kid in the row in front of me is trespassing."

The officer didn't take kindly to that line of questioning, Poole says, and that's when he decided to arrest Poole.

That's where the video picks up. In it, the officer can be seen trying to get Poole to leave while Poole continues to try to argue his case. Eventually the officer goes for the cuffs, and three more cops step into the scene.

Recognizing that he was about to be arrested, Poole then attempts to hand his commemorative Stanley Cup beer glass, which he'd purchased at the nearby restaurant Tin Roof, to the person holding the camera.

The police officers didn't respond particularly calmly to that sudden movement, and can be seen grabbing at Poole's arm in the video. That's when Poole starts yelling the three words that should become just as ubiquitous in St. Louis as "Let's go Blues."

Poole was carted off shortly after and taken to a holding cell in Busch Stadium, where he was cited on a municipal charge of trespassing and then released. Sadly, his words of warning failed to save his memento; his cup was tossed to the ground.

Asked if it was all worth it, though, Poole makes clear that he has no regrets.

"Absolutely," he says without hesitation. "One of the best nights of my life."