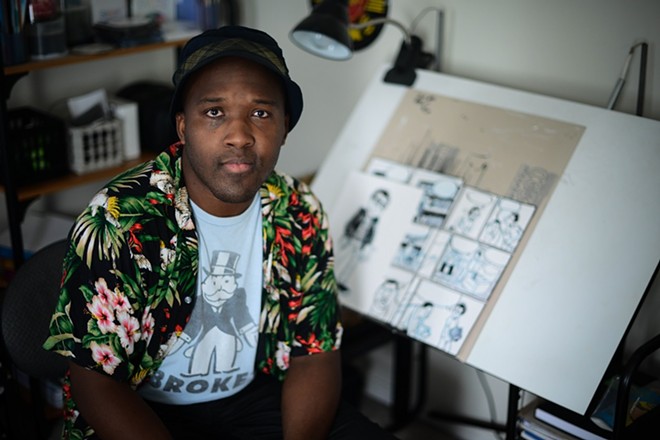 Dmitri Jackson, a freelance graphic artist, decided to combine five years of his Blackwax Boulevard webcomics and self-publish them as a graphic novel called Blackwax Boulevard: Five Years, What a Surprise (2012-2017).

Released through Jackson’s own Frotoon Press in late 2018, Blackwax Boulevard is set in a struggling record store and chronicles the lives of a group of record store clerks and their frequent interactions with oddball customers.

Publishers Weekly praised Jackson in a review for creating an “honest, believable world where the cool girl behind the counter struggles with addiction and the quirky owner isn’t always diligent about managing his diabetes.” The collection was a finalist at the Next Generation Indie Book Awards, and won the prize for Comics and Graphic Novels at the recent National Indie Excellence Awards.

Jackson was born in Fort Sill, Oklahoma, in 1985 and moved around before settling in St. Louis in 1998. He got his start creating animations and drawing comics when he was eight years-old.

“As a young kid, I always doodled whatever cartoon I saw on television. I was trying to copy and draw the cartoon,” he says. Jackson, now 33, drew inspiration from cartoons such as Tex Avery’s Droopy and George and Junior series as well as Chuck Jones’ Wile E. Coyote.

“Just seeing how Chuck Jones managed to design and draw these characters and imbue them with such life … that was really captivating to me as a youngster,” Jackson recalls.

“[Passmore] has a very unique sensibility in terms of tackling the issue of race and ethnicity in the 21st century. It’s a very fresh perspective he gives. It’s a perspective nobody else sees much in comics or independent comics today,” Jackson says.

The New York Times heralded Passmore’s Your Black Friend (Silver Sprocket) as a “small masterpiece of storytelling” that articulated “the daily stress of one man’s social relationships with white people.” 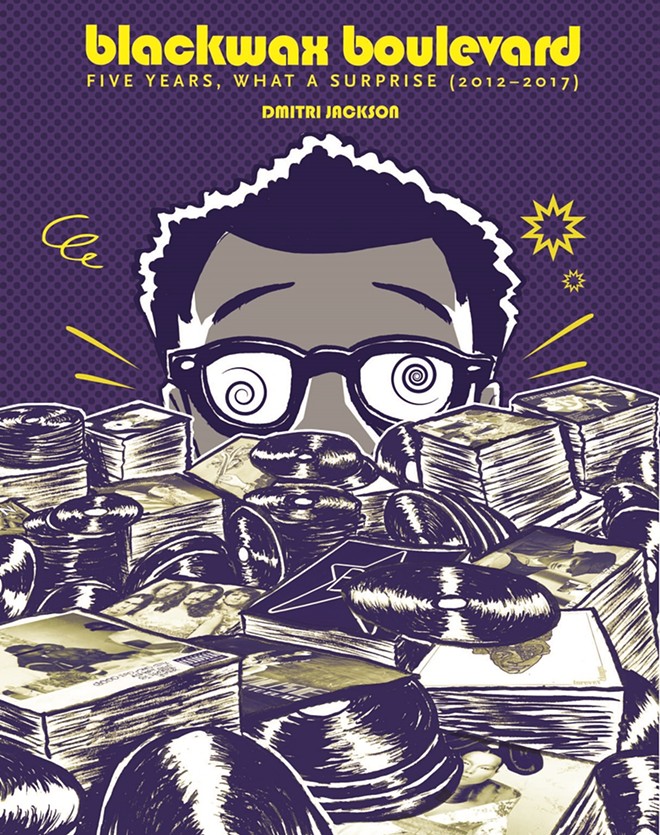 When Jackson transferred from the University of Missouri-St. Louis to Washington University in 2005, he further honed his drawing skill as an editorial cartoonist for the student newspaper Student Life.

“I managed to build a name for myself on campus and I met a lot of really smart and funny artists in the process,” Jackson says. Now an adjunct professor in comics at the college, he says the response from the paper's readers was rewarding because of the impact his work made.

“It’s almost like a drug where seeing the reaction of people and getting the response that you wanted from them, it was intoxicating,” he confesses.

Although Jackson is proud of all of his individual strips, his favorite piece involves features store manager Hardy Rollins at work. “He’s at the top of a mountain consisting solely of album covers and it’s kind of like this majestic one-page image. I like the overall effect of it. It’s a really nice collage. It’s probably my favorite one,” Jackson says.

Jackson can be found on Twitter and Instagram and his book can be purchased online on Amazon and in stores at St. Louis Art Supply, Vintage Vinyl and Euclid Records.